Nice day forecast yesterday, so after the wife went to work and the lad went to school I mooched up to Rising Sun (Mondays is my day off).

Arrived to find only 2 other blokes fishing and the "Golden Peg" free, so set up with high hopes of catching lots. I wasn't disappointed either, with loads of early action on my short line and a good few Ide in the bag. Went shallow when the Ide slowed down on the bottom (was beginning to get a bit bored of them by then anyway) and only got a few small Rudd, so started work on a couple of longer lines for carp. These proved to be slower going, but did finally result in four carp and two hook pulls. Happily the best carp was also my PB at 11.5lbs

It fell for a banded halibut pellet fished over loosely fed halibut pellet, and what a scrap it gave too on number 13 Duraslip! It's funny how the bigger carp don't go as ballistic as their 5-6lb brothers and sisters. This one didn't feel that big until I got down to the top kit, then it just refused to come up to the surface and began to feel like a proper lunker! I must have been playing it for 15mins- partly out of fear of pulling out of it, and party because I saw a YouTube fishing "celebrity" smash his top kit up on a carp here a few weeks ago! To be honest, it didn't look that big when it first surfaced, but once it was in the net I noticed that it was really broad.

Got home to a slightly jealous (okay, extremely jealous) nine year-old son who had been at school all day while dad was having a jolly! 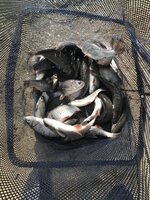 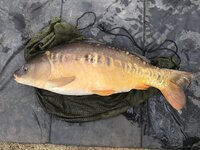 The above picture doesn't really do justice to quite how wide this fish was, but hopefully the unhooking mat gives some sense of its size!

Sometimes I sits and catches fishes......