Match 11 and our first visit to Renny Lakes since the rather chilly session we had there back in January Baby, it's cold outside We had a healthy fifteen strong field which just about filled the small lake and following the draw I found myself on the same peg I’d drawn on our previous visit, down in the corner with the aerator for company. I had Jim to my right on the peg that Bob had won from back in January with Ian, who was guesting today, to my left followed by Dave who’d also drawn the same peg he had in the previous match. Andy was the only other person I could see clearly from my vantage point. 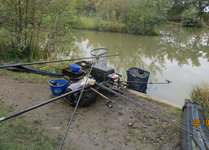 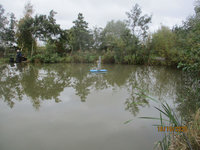 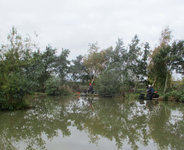 It’s a foot or so deeper at this end of the lake than the other – pushing 6 ft I guess but fortunately the depth straight in front at 6m was the same over towards the aerator at 11m so I set up three rigs for these lines – one with spread shot for fishing on the drop and two with a bulk and droppers. All three terminated in 0.11 hooklengths and size 18 or 20 hooks – Preston SFL-B. I also had a margin rig to fish down my right-hand side, even relatively close to the bankside vegetation I had a good three feet of water – this rig had an 0.13mm hooklength to a size 16 hook of the same pattern. 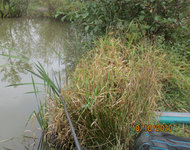 I dropped some corn and pellet over by the aerator and down the margin and while that settled had a look on the 6m line out into open water with a single maggot on the hook. Just flicking a couple of maggots at the float once a minute or so soon provoked a response and a couple of small roach were swung to hand followed by a load of small (and unhittable) bites which eventually resulted in a tiny gudgeon. They’re a bloody nuisance since they seem to just sit with their mouths over the bait without moving. That was my cue to have a look at my other lines and both produced a couple of small roach before bites died off. 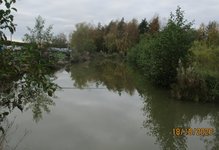 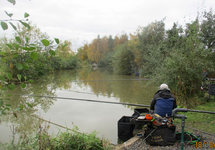 Back on the 6m line I did eventually hook a carp – six feet of elastic streamed out of the pole before all went slack and I discovered which part of the carps anatomy I’d actually made contact with. An hour later I hooked another which stayed on – only a pound and a bit but very welcome – and gave the solid number six elastic I’d fitted the night before a decent work-out. There wasn’t huge numbers of carp getting caught elsewhere – a few had single fish but that was all. 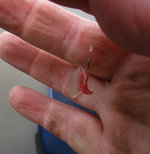 I continued to rotate around my three lines, adding two more small carp to my net – one from the margin and one from the aerator. Due to the number of gudgeon on my 6m line – how does a 4” fish swallow a 3” chunk of worm? I decided to abandon that and concentrate on the other two. Andy had picked up a couple of fish from his margin line, as had Jim so I followed suit. 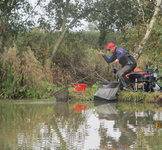 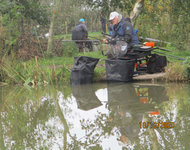 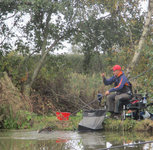 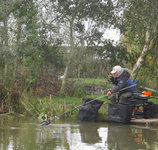 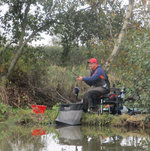 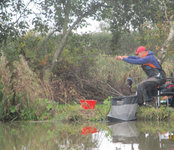 I wasn’t catching as fast as Andy but seemed to be on a par with Jim – although from my vantage point his fish seemed considerably larger. I had an idea there must be carp present along the margin since there was nothing else there – no gudgeon or roach. So it was just half a handful of loose-feed with single or double red maggot on the hook. I landed one ‘proper’ carp of probably eight pound but most were considerably smaller. Ten minutes from the end I hooked another lump – I only caught a brief glimpse of it, but had it on a while and it felt bigger than the eight pound fish I’d caught earlier. I’ve always maintained that if you stop a fishes initial run you should, providing there’s no snags, land it. I may have to revisit those thoughts as, after five minutes of it ploughing up and down my peg, the hooklength parted at the loop for no apparent reason. 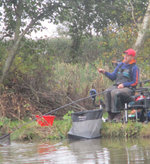 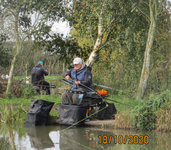 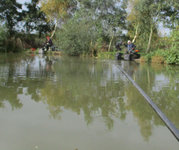 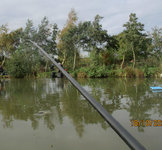 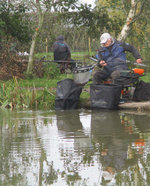 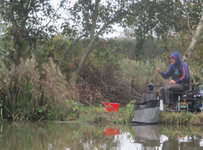 Andy snared one right at the death too and from bankside gossip it appeared first place would be either him or Mattie on the adjacent peg – however since they were both guesting the trophies destination was likely to be myself or Jim.

A number of anglers had tipped back – Barry, Tink and Frankie from pegs 1,3 &4 – Frankie was particularly unlucky as he hooked a decent carp early on and lifting it out of the water the end of his landing net pole shattered and the fish was gone.

Mattie on peg 5 had also stuck to the margins most of the day and landed 23lb 9oz – he was a little fortunate to draw the same peg he’d practiced on a couple of days previously. 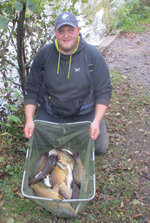 Andy was well in front with 31lb 6oz 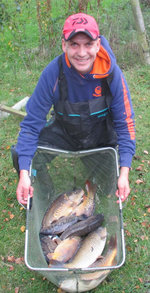 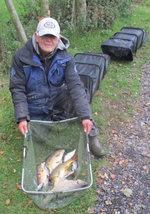 I had a bit more than anticipated, weighed a level 22lb and claimed the trophy 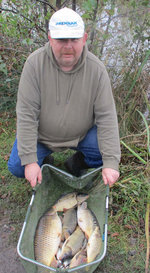 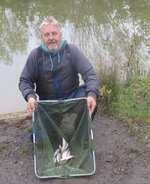 Dave tipped back – he did catch a fish – which was more than he achieved from this peg in January. Steve had just 12oz and tried to escape the camera 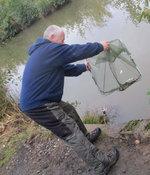 Kev had also tipped back – although did leave a memento of his visit on the island – an entire rig and three feet of elastic adorning the bankside vegetation after he pulled for a break.

Paul had easily the best silvers catch with 7lb 11oz 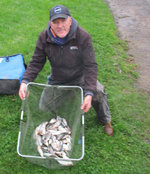 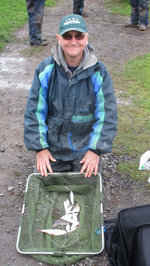 Darren was on the end peg and had a 4lb+ carp but unfortunately very little to go with it, hence his 4lb 5oz total. 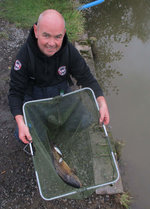 Next two matches are firstly the pike match on the dolomite section of the Tees at Bowesfield on November 1st and then the Simpson Trophy on November 15th which, by popular opinion, we’ve moved to the same venue as Sunday – the small lake at Renny. 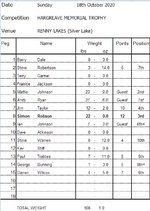 Great report Simon and congratulations on the 'win'