Removal of fish - to stop littering !!!

No sympathy what so ever , makes me laugh when people go on about free fishing and how they can’t afford to go anywhere , but then again are happy to spend Money on gear .

Don`t want to mislead anyone but MV is full again.

As of Wednesday last week according to Maidstone Angling and the website MVAS are still fully subscribed and closed to new membership.

Of all the local clubs I would think of joining would be Kingfisher who have the lake complex at the back of Snodland since they look the best for my son to learn on - problem with that though is they have a waiting list of over 300 names !

If it all goes totally pear shaped at Neville Park then other than plenty of free river stretches on the Medway and it’s tributaries we’ll probably day ticket Mousehole or Monks - maybe Mote Park at a push.

Irishhybrids said:
No sympathy what so ever , makes me laugh when people go on about free fishing and how they can’t afford to go anywhere , but then again are happy to spend Money on gear .
Click to expand...

Fished the park lake again today - I’ll put a report on later but it was a stunning session - an old local was dog walking and stopped for a chat about the lake. Turns out there was an article in the local free paper detailing that the water will be netted in January (because of litter, anti-social behaviour, etc) and the lake turned into an “eco pond” whilst the fish will be relocated to the £600 a year specimen lake over the road

Dumbest idea in the world - it will still be a magnet for all the adolescents who congregate there now & the only thing that won’t get dumped is the odd bit of line.

Yesterday proved my point that the councils actions will not work.

The three pictures below show the lake - 95% free of litter - as myself and one or two others clear the pegs we fish on. The weather has turned Baltic so the only people on the water are actual anglers, myself and one other.

It‘s going to be like this for the next couple of months, as long as the weather is cold / wet.

On my walk back to the car through the park however was a group of 8-10 youths on the kids play rides drinking, eating takeaway food, smoking ‘herbal‘ cigarettes and leaving a shed load of mess on the ground despite there being 2 empty bins within yards of them.

Once the fish are removed will the council remove the kids rides or the benches ?

Will they heck and yet the very issues they hope to tackle will remain and probably expanded in their distribution. 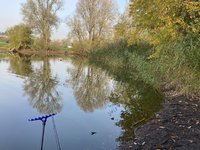 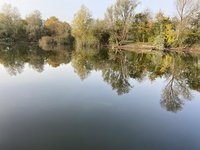 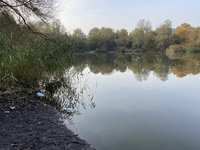 Pompous git said:
Watcha Taff, A few minutes bike ride from me is Singleton lake, several acres and well worth fishing. This was free fishing until the
local club took it over. Good job too as the council were on the verge of banning angling.

Example, I walked around the lake about 10am, three comatose teenagers around the remains of a broken pallet bonfire, beer tins
all over the shop along with a now silent ghetto blaster. The fishing tackle was something out of their grandad`s shed the sort of
thing that people used on piers way back when. It does not take many instances like this to galvanise local residents into {justified}
action.

This is me {poor photo I`m afraid} fishing a pond at Burgh Heath {Surry} in the fifties close to where my Grandfather lived. Again free
to fish up until a few years ago when it was netted to stop night anglers. I understand fishing is now banned full stop, all because of
idiots.

I can understand people moaning about the lack of free fishing but in my view any fishing that is free only takes an anti type council
to pass a couple of by laws and that is an end to it, not so easy if it is controlled by a club. A while ago I think it was you said MV had
a waiting list, I understand they are now accepting new members, very good club.
Click to expand...

That little pond in Burgh Heath and the removal of it's fish, and ban on angling is very contentious. Because it's a place of angling significance. It's the pond that Chris Yates caught his first ever carp from, as a young boy, and inspired him onto greater things. He writes about it in 'Casting At The Sun' and 'A Passion For Angling ' and references it in the television series. So it's loss to the fishing world has been strongly condemned, not least by Mr Yates himself.

Lee Richards said:
That would deprive others though and lose a wildlife haven.
Ban angling for a while and if the litter is still there it will prove it's not anglers.
Click to expand...

Now that's a forward thinking move, and could work very well. Sadly many councils will not engage with the public unless forced to.


We had a wonderful old blue fir tree on our old peoples estate. It looked amazing until it was broken in the wind in 2018. I phoned the council and they simply did not want to know, not really our responsibility. "Well you empty the rubbish bins there and cut the grass" I told them the tree was in distress and needed attention, and I would do it if needed. They still put up an opposition to that, so I wrote a piece in the local paper, and quoted the Council statement. The tree has now been repaired over a year on and hopeful will last another 50 years or more. Sometimes you need to name and shame local councils? I feel for you buddy, losing a local resource, I think antisocial behaviour deserves much heavier penalties. There is no excuse for little a £500 first offence and name in the local paper should help?