Putting your rods on a roof rack

For the holiday everything in the motor... no ifs no buts... back seats down... chairs or boxes either side, rods down the middle carryalls behind the box or chairs and clothes bags tucked in where they'll fit... nothing gets lost or broken
D

Must be 20 years ago was driving down A1 with rod bags tied to roof rack 5am in morning was still dark, roof rack came off car
worse bit car behind ran over it smashed new pole every section and cracked 2 more rods always put rods in car since
B

crikey sorry to hear this matey. Enjoy your San Miguel.

Got a Focus estate. Seat box carryall nets etc all fit in boot and I regularly carry the rod/pole holdall strapped to the roof bars. Several wraps round holdall and roof bars and they don't move. Keeps the interior muck and scuff free. Means I can get tackle and family in the car. Very rare to see others doing this these days but it works for me!

Not something that I'd be doing either

A slightly different story but a few years back we were driving down the M5 in Somerset heading south , in front of me was a car with 4 canoes on the roof rack , as we were approaching the Clevedon exit where the motorway goes down a hill and it is quite exposed with always a bit of a headwind I thought lets get past this car , I overtook it and pulled in in front of it and looked in my mirror just as the 4 canoes took off from the rack and landed on the road where we would have been !

Again not rods, but going down the M4 once and noticed some shoes in the outside lane. A bit further and there was a sweater, then a car pulled over on the hard shoulder with an open roof box and clothes across all the lanes.
A women and a bloke desperately trying to grab stuff when they could and two kids in the back of the car looking out of the window
I wonder how that conversation went before and after.

Hang them on the inside. 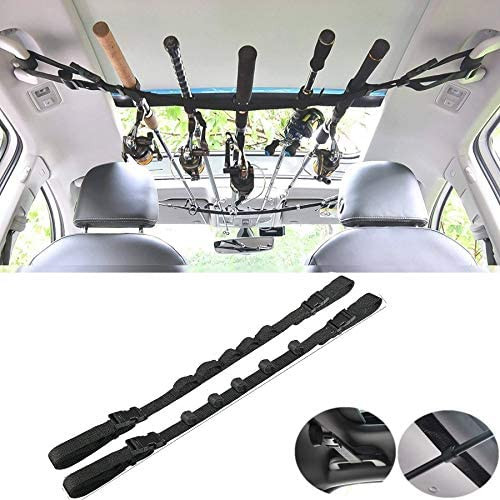 I use a similar system to the Higomore - just two bungee cords between the handles because it's cheaper.

Don’tTellEmYourName said:
I use a similar system to the Higomore - just two bungee cords between the handles because it's cheaper.
Click to expand...

Does it keeps the rods well out the way? Off on a family holiday later this year and have been wondering how im going to take the rods!

I used to have a pair of ladder-racks more or less permanently attached to my old VW Polo - we had a family business selling window blinds and I used to do the deliveries a couple of nights a week - anything over about 7' wouldn't fit in a Mk I Polo so had to go on the roof.

Holdalls would usually go inside the car - diagonally with the back seats down but if there were more than two of us they'd have to go on the roof - I only ever used bungee cords to secure everything and, perhaps fortunately, never lost anything.

Did have a close shave one day though - I used to have one of them Stephens holdalls with the velcro attached top. I must have forgotten to close it properly 'cos upon making a sudden stop my old glass pole decided to leave the holdall at a rate of knots

For some reason the butt section didn't move and 20-odd feet of glassfibre telescoped out of my holdall, making the car look like a giant unicorn

davej1981 said:
Does it keeps the rods well out the way? Off on a family holiday later this year and have been wondering how im going to take the rods!
Click to expand...

Depends on how many rods, I don't keep them kitted up with reels, just the rods in bags. The bungees are stretched quite tight. Give it a try mate.

PS, I'm used to driving vans so don’t use the rear view mirror only the door mirrors.

Trouble is, if the rods are in soft holdalls you cannot strap them down tightly, and a couple of bungee straps are nowhere near sufficient. I would only transport rods on the roof in one of those hard shell roof racks.
It says he had a van, unless it was very small, why put them on the roof.
J

Chervil said:
Hang them on the inside.

Thanks for this, never seen these before and will be ideal for when we go to France this year. Done a quick search and managed to find something very similar on sale here

JimM said:
Thanks for this, never seen these before and will be ideal for when we go to France this year. Done a quick search and managed to find something very similar on sale here

Never used them, just came across them a while ago. Normally just me and the wife in the car when we go away, so I don't have problems getting kit in.

Back in the early days of fishing White Acres when Andy Seery owned the place we would go down with 3 of us in the Mondeo estate. Rods bags were always on the roof bars. Everything in tubes. One of the lads used to work at the airport so the rod bags were usually pallet wrapped and then bungee strapped to the roof bars. 3 x 6 draw boss boxes in the boot with a couple of bags of 25KG pellets, suitcases, Keepnets, trolleys along with the all important wet weather gear ! Usually ready for a wet week in Cornwall in a caravan at WhiteAcres! And a couple of loaves of bread to wake the caravan up next door with the seagulls on the roof! Fun times.

I have a rather small car, a Daihatsu Terios, but I still manage to tuck the rods inside the car. If they are properly secured on the roof, I can see the point of it, but it's not for me. I would be worried all the time. But of course, with a wife and kids and lots of luggage in the car, you don't have many options.

Rods are precious.
Always keep them inside the car when travelling.
Strap the kids to the roof rack.

I have seen a few videos on YouTube where they make a rod box out of 6 inch pipe and then add caps to ends and U brackets to hold it. They even painted and padlock them, but it only takes a screwdriver to remove the ends anyway. Or an adjustable spanner to remove the whole U brackets and tube.
Would love to find something similar that was actually a bit more secure and was at least 1.8m long.

UK's largest range of pipe tube & conduit carriers to choose from. ☑ Fits all types of roof rack. Choose from 2m up to 6m in length. FREE P&P on all orders.

One of those days
2