Not paid much attention to it tbh think I generally pay £4-5 for your average sized bag. I go through quite a bit when feeder fishing but with trotting I’ll get at least a couple sessions out of a bag as I only use it to kick start the swim with maybe the odd top up.

Apart from the mainline groundbait (margin/method)I get everything else from So-Simple baits , really great products at great prices ??

I've made my own for the last five years or so. The end crusts off a loaf of bread, the outside crust of a pepperoni pizza, Weetabix that I'm fed up with, cheap dog biscuits and maize flake from the local pet store, cooked and dried hemp left over from a session, fishmeal I've had for years from when I used to be on tippers, (got bags of the stuff), and the occasional bag of Brasem powder. All put through a blender and mixed. I've got 2 plastic dustbins, one with added fishmeal and one with Brasem. At last count there was 76 1 kilo bags in them. Total cost to me about £20.
I'm not tight with money, I just hate throwing stuff away, especially food. And I enjoy mixing different things to see what works best.

Fred Davis said:
I few years back when the groundbait feeder was doing the damage me and a mt8 used to fish all our club matches with a 40 /40 mix of brown crumb and fishmeal with 20% crushed hemp worked a treat we had a great run as the groundbait worked a treat a lot of the regulars were using sweet fishmeal but we were winning with what we used, at least we knew what was in our groundbait was top quality ingredients. Another match winning groundbait was liquidised cat biscuits all cheaper than mainstream groundbait the groundbait was such a success that on the maver match this clubman final all the lads asked what it was and I started to produce a few bags for the local tackle shop, however it takes it's toll on the liquidisers, I also made some cat biscuit paste to use with it, cheaper than commercial ground baits but worked a treat, the cat biscuit groundbait was not my idea but John Brennans who took the willinhurst club matches by storm his lad Sean also used it and it was not uncommon for the pair to get a first and second on the day.
Click to expand...

I know what you mean about taking a toll on your liquidiser. I like to grind up vitalin and add it to my mix.

Does the same price increase also include stick mix? I haven't noticed or checked to be honest.
M

Sonubaits at 6.99 for 2kg is good value and a lot of variety too. I gave a quarter of a bag of the new banoffee to the pa in law and he had a good day catching decent bream. Hevis not really known for his angling prowess
D

Godber said:
I know what you mean about taking a toll on your liquidiser. I like to grind up vitalin and add it to my mix.

Yes I think you soon work out that the novelty and hassle of making your own groundbait is a fleeting thing, these days I just buy sonubaits and dynamite baits ground baits, much easier and the bonus that you don't end up smelling of cat biscuit or fishmeal lol

Up until BSE and then the huge Foot and Mouth disease outbreak in 2001 fishmeal was available from almost any animal foodstuffs supplier for under a tenner for a 56lb sack - a quick sieve to get rid of the lumps and you'd be left with what was, to all intents and purposes, the bestselling groundbait in the mid-late 90s - Sillybait.
New regulations regarding animal foodstuffs basically ended the use of fishmeal, bonemeal and all other animal derivatives as cattle feed and also introduced strict new rules regarding cross-contamination and bio-security so unless you ordered a pallet-load (10 x 56lb bags) and removed it from the premises immediately it was impossible to obtain.
Try and buy a 25kg sack today and it'll probably cost upwards of £50 - it'll be better quality than the rough fishmeal we used to buy - i.e. already sieved - but is basically the same stuff 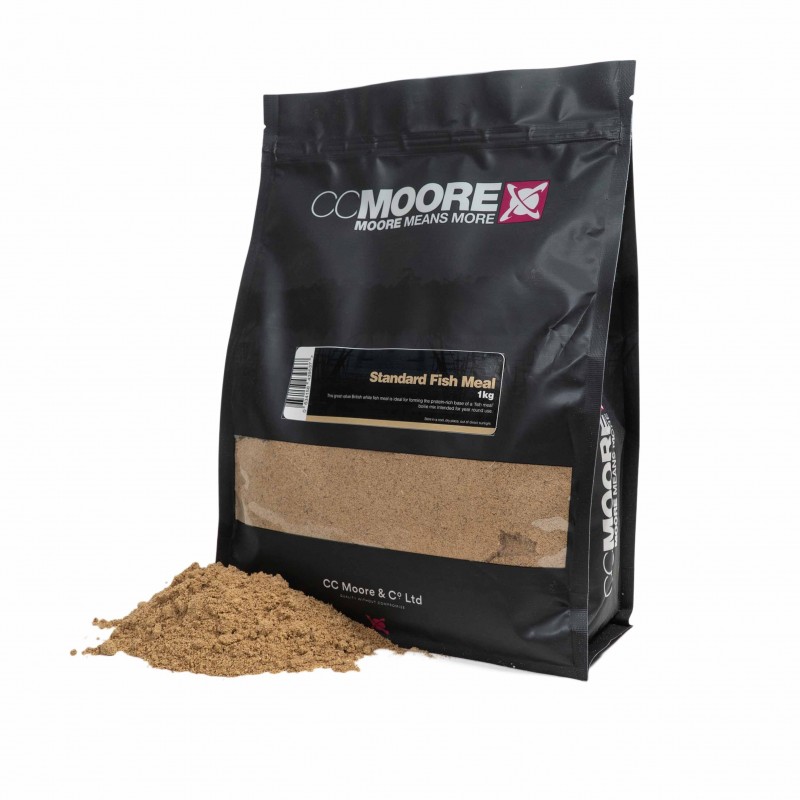 This bulk ‘white fish’ meal is of a consistent physical quality and contains high levels of key nutrients. It is typically a light grey-brown colour and has a rich, natural fishy taste and aroma that fish love. It’s protein content of 66%+ is very digestible, making it ideal for year-round use...

Fishmeal on its own is fairly useless as a groundbait - it doesn't bind - so needs the addition of a binding agent - brown crumb, crushed pellets, biscuit etc - the latter being a major ingredient in 'sweet fishmeal' mixes.

I seem to remember Sillybait was about £2.50 a bag, which was about 50p more than the VDE and Sensas ranges of continental groundbaits - none of which contained fishmeal at that time. Lots of other companies got on the fishmeal groundbait bandwagon but prices didn't really rise until after F&M which bunged at least a quid on the price of groundbait containing a lot of fishmeal.
For a long time standard continental groundbaits were £2.99 and 'carp' groundbaits with fishmeal a quid more - I've not really noticed another price rise although I've still got lots of the freebie groundbait that Match Fishing magazine kindly sent me every year plus I use the Boland range which is under six quid for a 3 kilo bag Boland England Groundbaits

The oddities of hemp
2 3