The Environment Agency has outlined measures a polluter must take to restore a river after an incident that killed over 100,000 fish. 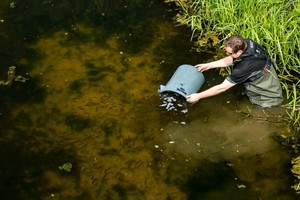 The company responsible for a serious pollution that killed over 100,000 fish has now been told how they’re expected to aid its recovery – by creating new, better habitats within the river and maintaining these for at least the next decade.
The Environment Agency has outlined the measures Omex Agriculture Ltd must take in order to restore the river to its former health, issuing a remediation notice under the Environmental Damage (Prevention and Remediation) Regulations 2015.

It’s only the second time since the legislation has come into force that it’s been used to have a polluter put right environmental damage they caused.
In March 2018, Omex was responsible for polluting the River Witham with ammonia, which severely damaged the river and its ecosystems. The pollution affected over 40 kilometres of river from Bardney to the Wash and killed over 100,000 fish. It is thought to be the worst river pollution incident ever recorded in the county.
But now a plan has been set forward outlining how Omex will help the river bounce back over the next decade.

By the end of this year, Omex must investigate and design a number of habitat improvements to help boost the river’s ecology, such as fish refuges and improved woody and marginal areas to help them shelter, spawn and feed.
Fish refuges are to be installed across half a dozen locations on the river by the end of January, with other habitat improvement works completed by the end of June 2021.
Omex must also look at whether it’s possible to create further backwaters along the river – calm, still areas where fish can breed and shelter, especially when flows in the main river are high – with the intention of completing this work by spring of 2022.

Once the works are complete, the company must assess whether fish populations have recovered, or whether more fish restocking is required to bring the river back to its former state of health.
And Omex will be responsible for monitoring and maintaining the improvements for at least the next decade.

We know the pollution had a devastating impact on the River Witham and its ecosystems, but this innovative approach means both its health and habitats will be restored, helping repair the damage done.

This is a prime example of how we can hold a polluter to account while also keeping the environment at the heart of what we do, for people and nature.
Click to expand...

The initial proposals were developed by the company before being shared with the Environment Agency for scrutiny and expert advice. After a thorough review, final plans have been agreed and the company has 28 days to appeal.
The proposals were finalised the same week as the Environment Agency launched its’ 5 year plan, outlining how it plans to lead the way toward a greener, healthier future – including by improving more than 4,000 kilometres of river across the country.

Immediately after the pollution, the Environment Agency and partners worked tirelessly to mitigate the impacts and have since restocked the river with more than 1.5 million fish larvae and 70,000 roach and bream.
Meanwhile, the investigation under the Environmental Permitting Regulations has concluded and court proceedings have started – a hearing date is pending.

Anyone who suspects a pollution incident is urged to report it to the Environment Agency’s incident hotline on 0800 80 70 60.
C

It's ok making them put right the damage they have caused, but what is stopping them doing it again?

This is great stuff, previously the polluter would have got a fine and forgot about it all, now it has an obligation to restore that river and will not be keen on having to do it all again. Well done EA and Fish Legal

RedhillPhil said:
This is the same result when Thames Water killed off the Wandle in South London some years ago
Click to expand...

The pollution had been on the cards at this place for years. I have delivered 30 ton bulk loads of urea to Omex at Bardney on numerous occasions in the past. As soon as I got out of the cab I could smell the ammonia, it was overpowering. Needed wellington boots to walk around the trailer as the concrete floor was covered in all sorts of fertilizer mixed with water, a good couple of inches of sludge. Disgusting place.

Reminds me that Cadbury in Bournville used to use a river that ran nearby for cooling in the plant, always seemed dodgy to me.

My dad tells me there was a sluice gate they used to have to wade in and open now and again, was my dads job to open it one day and he went, wound round the thing to open the gate and the bloke who had been doing the job for years shouted "What d'ya think yer doing?". Turns out you were only meant to open the gate by a few inches and it sent a 'tidal' wave down the river so got a few a complaints from downstream residents.

Don't pick a pike in the Broads this summer