A week of heavy rain and at times hail stone had brought a brunt and definite end to the River and Canal campaign that had been going so well. The river running high and chocolate was a no go and would be a needle in a haystack effort of landing near a pike where as the canal had that horrible grey sheen that screamed cold and dirty run off water form the local roads, both not good. It meant a day booked off work with my mate Ste Daley saw us looking towards the still waters.

A large old English Estate Lake was the destination of choice and a venue we make a point of visiting once or twice a year for pike. A venue that, for me, holds that sense of magic and mystery and a day where the saying A Fish is a bonus does really ring true!

The morning of the session and I stood in the kitchen brimming with excitement, a kid on Christmas eve like, I peered out of the window at the houses across the way with their roof tops glistening as the moons light shone though their icy crystals, a proper winter morning. A quick coffee and it was time to delve into the bait freezer to pick out some baits for the day, smelt and lamprey had always done me well on there so they went in and then I threw in a few change baits in the form of sardines and herrings and I swiftly closed the door on the freezer. I would be in the cold long enough today and I wanted to make the most of the warmth, even if it was only for a few minutes.

The car loaded and jack frost melted from the wind screen it was time to meet up with Ste and move all the gear into the van. We began out journey to the bank down the winding narrow creeping country roads of the North West the head lights illuminating the path ahead with the occasional bunny hop as the van made contact with the uneven surface below. The farmers fields either side studded with pools of white while the horizon glowed with that light blue haze that consumed the night stars as its feint rays reached their stubborn station in the night sky signalling the arrival of day break was not too far away.

We arrived at the cast iron gates held firm with their sandstone pillars that I guess have been there for as long as the old stately home situated within the grounds they protected. The gates opened and unlike the black Friday chaos that was no doubt about to begin around the country this was a far more sedate and relaxed affair as we passed through the gates and down the dark path to the lake. The track was flanked either side with all manner of variations of deer that stood alert and to attention, a guard of honour like as we passed through their wooded domain.

In the dark I made my way to the lake passing through the herds of deer that rested by its banks during nigh time. The lake, huge and daunting, lay in front of me. A lake that offers the angler a huge challenge with its gin clear water, sandy and weedy bottom and bottomless depths off the shelf. A place where your bait truly is a needle in 20 haystacks in comparison.


A gentle breeze blowing over my shoulder onto the lake had left a huge amount of calm flat water on my bank and in the dark pre sunrise light an opera of fish topped, first one, then another and another before the water almost danced with their activity. On a water this huge location is huge and we knew being on these bait fist was key so we set our stall out to cover the whole area they where topping.

Your imagination just goes wild and you can almost imagine a hungry old pike stalking those shoals meandering slowly though the weed as it does so almost lioness like with its belly hard on the bottom moving slowly as it keeps in touch with the herd only this herd was probably silver and roach shaped.

The rest of the session is here: http://satonmyperch.blogspot.co.uk/2017/12/pike-fishing-estate-lake-magic.html 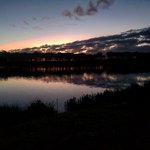 for those who only check this part of forum, the video of this session is live below: