Match number seven of the season last Suday saw our second visit to Grange Farm Pond just outside Thirsk. It’s a natural pond rather than an overstocked commercial and the main targets are bream / skimmers and roach plus (a seemingly increasing number of) tench and odd perch, chub and carp.

This match is our float only event, one of the oldest trophies, and always decided on a points basis – one point per fish and one point per ounce. In practice it’s often the angler with the greatest weight who wins it – but that doesn’t always happen. I knew it was going to be a struggle with the blue skies and bright sunshine – I could see the target fish – big groups of bream plus odd chub and perch cruising about just under the surface – none of them interested in feeding.

We’d lost a couple due to the virus but there were still ten of us present so I bunged three of the rebuilt, roadside pegs into the hat with the rest fishing opposite, The only problem with the roadside is that now the caravan site is fully open there’s a fairly constant stream of traffic – cars and dog walkers etc – so fishing the pole isn’t really an option. 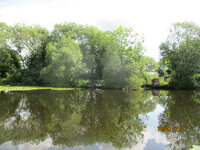 I pulled out peg two (on the roadside) so left my pole in the holdall and pulled out two already set-up waggler rods. My 14’ Acolyte Ultra was already rigged up with a fairly long two swan bodied waggler and a quick plumb indicated that I had about 10’ of water at 20m or so, so I set the float 6” over depth so it would present a stationary bait. My 12’ Acolyte carp waggler already had a pellet waggler attached but I replaced that with a Drennan Glowtip Antenna in order to fish either shallow at the same range as the rod or close in against the marginal lily pads. The stronger rod being preferred to a lighter one just on the off chance that I found myself attached to an oversized tench or bream – incidentally there was a 9lb tench caught from here a fortnight back and an 8lb+ bream last week. 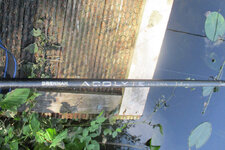 At the start I fished the full depth rig, just loose feeding casters and watching closely for any indications of bites on the drop – of which there were none. Finally after 15 minutes or so the float dipped and I swung s small roach to hand, that was quickly followed by a brace of tiny razor-blades – the intended species but just the wrong size. It all went quiet again so I switched rods thinking the fish may have come off the bottom – it is quite common at Grange Farm to catch the skimmers (and even ‘proper’ bream) in mid-water especially in winter. 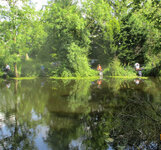 I’d been flicking casters in alongside the lilypads since the start of the match so I had a look over that area – that saw me snare a little perch which is usually a pretty good indicator that there’s nowt better in the area. I returned to the full-depth rod, continuing to loose-feed a few casters. The cruising fish showed no interest at all in my bait, moving out of the way of it rather than eating any. Elsewhere I’d seen George and Jim get a few bits and Barry landed what looked like a decent sized bream but I had little idea what else was happening. 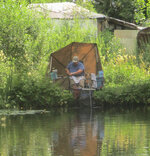 I dumped two big cattyfuls of casters in and went for a wander. Nobody was pulling up any trees – in fact Ian, Jeff and Juliet were all fishless. It was just bits elsewhere, Tony got a couple as I was stood behind him, although he did seem to be, rather sportingly, letting half the fish he hooked slip the hook – either half way in or as he was swinging them out of the water. 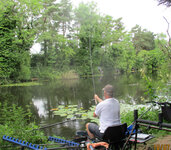 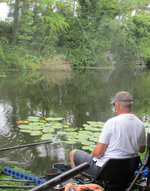 As I passed Juliet enroute to my peg she was just swinging in her first fish of the day. 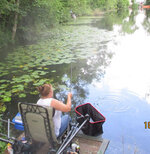 It seemed resting my peg had done some good as I hadn’t been cast back out more than a couple of minutes when the float slid away and I found myself attached to a plump skimmer of 12oz or so. Five minutes later I got another, just a little smaller and thought I might be getting somewhere but it all went dead again. I repeated my tactic from earlier, dumping in more casters and spent 20 minutes fishing down the edge without adding to my total and then trying the full-depth rig again although this time without success.

I kicked a bit of corn in that was on the edge of the platform I was sat on and before it hit the bottom it shot sideways. I dropped a maggot in and watched more closely and a little perch shot out from under the platform and grabbed it. I wouldn’t normally have bothered but in a match where you get points for the number of fish caught it was worth going for so I dropped my float in the edge – although I was actually watching the bait for bite indication. I got three perch about an ounce each before the bites stopped and other than a little roach with practically my last cast that was it for the day. 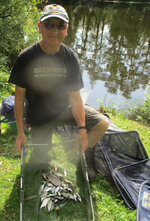 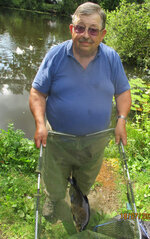 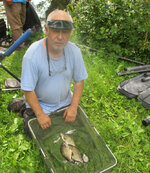 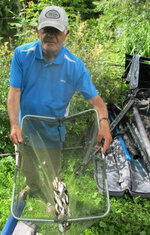 Jeff caught a few fish late on - his 20 fish for 12oz gave him one point more than Barry with 32. 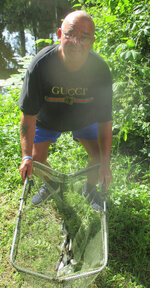 Tony weighed the same as Jim but was three fish short of his total so totalled 80 points – if he’d landed just a couple of the fish he dropped off it might have been enough. 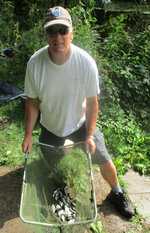 Peter had an ounce more than Tony but only 30 fish so 63 points and 4th place – he was the only angler to get a few net roach and I remember last year in the same match Jim got a few from the same peg. 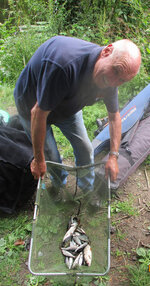 Juliet had just two fish for an ounce and Ian weighed 7oz for his four fish – he did lose a ‘proper’ bream in the lilies to his left which might have made the final result look very different. 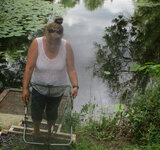 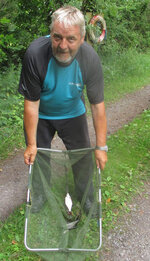 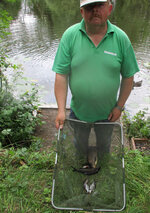 Next match (August 1st) we’re off to Rising Sun again – lake 2 and half of lake 3 are booked so there should be plenty of room.