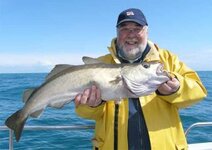 Peter Macconnell, who passed away on June 16th aged 74, will be remembered by sea anglers for his longstanding contribution to the Bass Anglers Sportfishing Society (BASS) and briefer role with the Angling Trust in its formative years.

Peter, whose family came from Woodley, Stockport was born in 1946 and had lived in Plymouth since 1986.

He joined BASS in 1990 and was a committee member for 23 years, fulfilling various positions including Chairman, treasurer and two periods as magazine editor. Peter edited his final magazine earlier this year, although he was always keen to point out that he was part of a team.

Throughout that time, Peter was always a safe hand on the tiller of the Society, steering a course that has ensured that BASS is well on the way to reaching its 50th anniversary in a good position and holding true to its founding values.

In 2010 and 2011 he chaired the Angling Trust Marine Conservation Group and was a staunch advocate for a national angling body to protect the varied interests of all anglers. When the Angling Trust formed in 2009, Peter was among its first members.

Peter was also an avid pike and trout angler and was a member of the Pike Angling Club of Great Britain, the Lure Anglers’ Society and the National Mullet Club. He was a past chairman of the Burrator Fly Fishers Association and he also enjoyed rough and clay pigeon shooting.

He leaves his wife Gill, daughter Laura and son Sam.

The post Peter Macconnell: leading figure in BASS for 23 years and one of Angling Trust’s first members appeared first on Angling Trust.

Shimano to support the Angling Trust’s work to protect fish, fishing and environment