Some of it is genetic, as general colour traits can be passed through parents and selective breeding may enhance those traits. Think golden tench as an example.
Melanism is likely a genetic trait that can make any animal darker or totally black.
On a daily basis, all fish have cells in their scales called chromataphores. These subtly alter the depth of colour in response to water clarity and adrenaline production.
In clear water, fish will be at their most brightly coloured. In turbid water, the colours fade. When fish feel stressed, the colours also fade, which is why a lively (not fought to a standstill) and just-netted fish looks more colourful than one lying on the bank for 2 minutes while you set up your camera!
BTW an interesting discussion during a fish science conference I attended last week.
"Perch are probably the least camouflaged fish in UK waters. When you see one while scuba diving, the stripes and red fins stand out against any background, especially reed beds. Perch are real show-offs of the underwater world."

Yeah I love it when you put Perch back and see them swim off with fins extended. Makes sense that they're a show off. I was surprised that Pike take them quite regularly too, the spikey fins must not put them off!

Zerkalo said:
Yeah I love it when you put Perch back and see them swim off with fins extended. Makes sense that they're a show off. I was surprised that Pike take them quite regularly too, the spikey fins must not put them off!
Click to expand...

? why would the fins put pike off when they have to eat a load of bones?

Agree there perch do look brilliant when you put them back and they swim off in clear water.

And yeah I’ve also found pike to be fairly indiscriminate in what they’ll try and eat!

What about the colours in this Perch? Looks weird to me. And where's the stripes?

And this one is certainly weird..

Another one for consideration 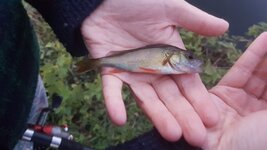 Zerkalo said:
First one looks very silvery (almost orange around it's mouth?) Second one looks very plump, stripes very far apart, and massive back on it!
Click to expand...

Yep, now look at the fin/tail colour on the second one.

Gorgeous colours on this fella
S

So after a year I returned to the pond with the purple perch and found that they are still prolific and in fact getting even darker. Both my other half and I recall them being 'normal' coloured on our first visit in 2018. Is it even possible for them to change colour quickly like this?

The interesting thing is that the roach are also getting darker. Check out these fellows.

I don't think the pond has become polluted, it is quite remote and lightly fished but it is heavily forested and quite overgrown.

Any ideas what may cause this?

Is the water quite clear? Only thing I can think of, I don't know what causes it!

Looks beyond the colouration of clear water to me more what you might see in tanic or peaty water?

That bottom pic looks like a roach/rudd hybrid, any rudd show in that water at all
S

I'd say it was quite dark peaty water, certainly murkier than a reservoir but not cloudy like a commercial.

As for the Rudd/Roach identification, I'm still useless at telling the difference between the two! I reckon there are rudd present however.

The darker small perch with a blueish sheen look like those which I catch in the Tees. The Tees usually carries a fair bit of peaty coloured water outside of flood, or drought, conditions. The roach are often similarly dark, but perhaps not quite to the same extent as those pictured above.

I was thinking the same re the peaty water, the Perch from the Tees that I remember were always quite dark along with all of the other species they seemed to have a darker tinge to the colouring. Also I used to fish a small pond in the middle of a very peaty boggy area where the water was very clear but always had a brown tinge to it and I remember the perch were almost black with bright red fins
K

The clearer the water the darker the fish in my experience, always wondered if that’s because of the fish getting more exposure to the sun ?