Delj come on tell us all about it,

is it right Delj a new pb barbel, congratulations!

not just a pb but a magnificent fish of 11lb.2oz.

All right then Tony, whose got a big mouth? As if I could not guess, as I only told two or three people on here.

I will do a report later on. Thanks for your congratulations. Mind you that's no more than I expect from a gentleman like your good self. How are you anyway you young devil you.

Hi Del, yep i'm ok! I'd be even better with a barbel like that!

I saw the post Andy Thatcher made on BFW.

once again nice one!

Congratulations Del,
Come on, tell us all about it!

I know exactly how you feel LOL,

come on del mate share your experience with us mate

Young Andy Thatcher (a mod from bfw) and I had arranged to meet at a club stretch of the R. Ouse "north of Bedford". We had hopped to be there before dark as I had not been to this stretch before but due to pressures of work Andy phoned to say it would be nearer 9pm before he could get there, and he was not far out.

The way things started out I thought the Friday the 13th bad luck was working overtime. while waiting for Andy I realised that I had left my torch isotopes and adapters at home. Andy and I had not met before so we had a quick natter when he arrived. I told Andy of the things I had left behind. Being a resourceful sort of guy he was able to furnish me with isotopes and adapters and said that we could both use his head torch. The next problem was that to get on to this fishery you have to climb a high fence that has wire mesh on the other side so nowhere to put your feet. No problem for you young chaps but for an old codger not so easy. However with much help from Andy I did manage it. Having picked out a swim we decided to share the one swim and commenced to assemble our tackle and bait up. Upon trying to put a boilie stop in place I realised I did not have my specks on PANIC stations, then I remembered that I had taken them of to put on a sweatshirt and that they must still be in my car. So of goes Mr. T to fetch them for me. What a star.

Eventually we were settled in and started to fish. After a while we started to get little knocks on the rod tips, Bream says Andy and sure enough a little while later round went my rod tip and in came a Bream of (Andy's guess) of 6lb.

Then all went quiet for a while no indications no nothing. A while later Andy said something and as I turned to answer him my rod butt hit my leg. I managed to grab it before it was towed of downstream. Another Bream says Andy with a laugh my reply was unprintable. I was using a 1 3/4 test Harrison rod and it shook and bent like something demented. However the Harrison is more than a match for any barbel and before to long Andy was able to slip the net under a wonderfull creature. I could not believe my eyes when Andy's scales told us it weighed 11lb 2ozs. After Andy had (against my wishes) taken a few photoes we took her a little way upstream and held her in the fast water near the wearpool untill she let us know that she was ready for release. The rest of the night was uneventful and we packed up about 1-30pm. 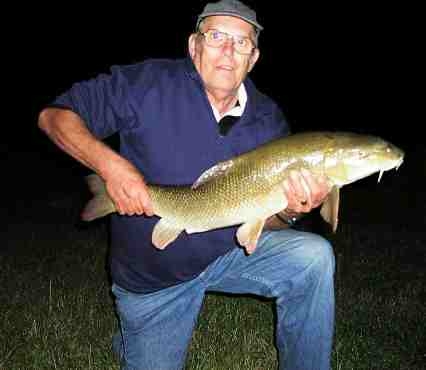 I have never been able to understand the lure of sitting it out in the hope of catching just one or two big fish. I have allways wanted to catch as many as possible and not worried about their size. Well all I can say is I WANT MORE BIGGIES. I should add that prior to this my biggest barbel was 5lb 1ozs

I was still on "a high" on Monday catching that beautifull fish is something I will never ever forget. Thanks Andy.

You are welcome Del.

Fancy going fishing with maggies kid of all people

I'll have a fiver on the black un
D

Fancy going fishing with maggies kid of all people

A little more respect for a great lady if you don't mind Troggie.

Just bringing this back to the top 'cos now we have a picture of Del's Barbel.

that is some fish