Been sacked for not playing the Derby County way. 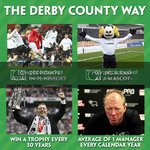 39 managers sacked or left for other reasons already this season.
L

Something was clearly not right. The players seem to have lost team spirit that had been evident. That did appear to be returning against Fulham, which may have been down to the five changes made to the starting eleven.

Clement had started to appear lost in post-match interviews.

I can't help but feel a little sorry for him, for some reason.
M

No. This is different.

I don't think any (genuine and realistic) Rams fan thought we had won anything by Christmas. We've been through it enough times to know it unlikely. It seems more a thought of those on the outside - wishful thinking.

Last season they bottled it, as a team. This season they have looked like a bunch of individuals until, oddly, Clement made five changes for the Fulham game and that team spirit returned in part.
D

The way the Derby supporters carried on at the KC, you would have thought they'd just won the league, after they'd beat the home side. They did play well that night though, and although they only had two half chances, they stuck them both away. There's a hell of a lot of water to go under the bridge yet, and it looks like it's going to be any two from about half a dozen. I reckon it will be Middlesbrough and Hull City for the automatic places, take your pick for the rest.
M

Have you seen Mel Morris' comments as to why they sacked him?
D

Have you seen Mel Morris' comments as to why they sacked him?
Click to expand...

I think your probably right. Although Middlesbrough's recent form could see Karanka shown the door... []

I heard Mel Morris' comments on Radio Derby, not the bits the press chose to print.

Something clearly wasn't right but was sacking him the right move? I'm not sure and don't, and will never, know both sides. So there is little point in judging either party. It won't change anything.
D

That statement puzzled me, "we weren't planning to go up this season". What do you do then if you find yourselves top of the pile, like they were around Christmas time? Then sack the manager, cos they are too far up the table. There's obviously another reason why they've binned him, probably got their eyes on another manager who's coming free.
M

Derby have 200 million pounds to blow ?

Tottenham Managers, Was I, Am I wrong?
2

football and the pandemic....