I headed over to Linear fisheries this morning to tackle One Summer Pond. According to their site it is the perfect fishing for new comers, looking to catch small carp and silver fish. 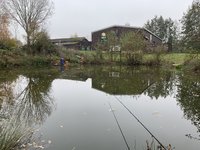 I arrived at 8.30, kitted up, plumbed the depth (more on this later) small required adjustment to the depth, slid the shot and float upwards and the float change adaptor broke, bugger! Start again!

I finally started fishing at 9.30am. 3 hours passed and my float hadn’t moved but I’d missed 3 bites. I could only assume I was fishing too deep..but I’d plumbed the depth twice already..

Depth plumbed again and the float remained slightly high no matter where I plumbed. Hmmmm...I adjusted the float by a foot, still the same..to cut a long story short, my float was set approx 2 foot too deep...Lesson learnt and one to look out for next time...morning wasted.

Correct depth set and surprise, surprise, first cast a nice little crucian caught on a caster..at lunchtime I was beginning to think a blank was inevitable, so this was a pleasant surprise and also a bit of a relief. 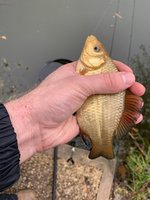 Within half an hour I set managed to hook into this nice little common, which gave a nice fight for its size. I reckon it was around the 2lb mark. 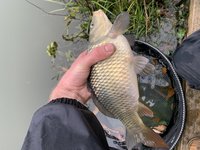 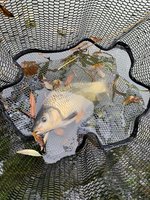 A small roach of around 2oz followed but once the rain set in, that was it. At 3pm I packed up and called it a day.

Positives: Good not to blank, ticked a couple of species off of the caught list, continue to learn some valuable lessons. Linear was very quiet and only 2 other swims in use on the pond. Bailiffs at linear very friendly and helpful.

Areas to improve: I’m certain the Reel is under spooled, so will need to sort before next outing, plumbing the depth.

@Silverfisher - One of the bailiffs mentioned that the pond is mainly stocked with Carp, Crucians and some tench. He did mention there were a few roach, bream etc but in low numbers. I’d say this might be one you want to avoid.
Last edited: Nov 8, 2020

Blimey that is a pond isn't it! Some reason I thought it was bigger than that. Interesting report though. Sounds like more of a warm weather venue with such species. Will have to go gave a nosey around whilst it's quiet.

Glad you got out perfect weather for it today! Would of gone somewhere myself but my cars busted so not going until Tuesday when I can get a lift. Typical as apparently the bream were really coming out of the city centre today. Has got me torn on where to go Tuesday and whether to fish for roach or bream.

Exactly my thoughts, I think I’d go back but I’d wait until the summer (although it could be very busy ?)
I was surprised at how small it was, only 8 swims.

Sorry to hear about your car. Keep us posted with your trip Tuesday. A day on the bream sounds dreamy tbf! What venues do you have in mind?

I’m not sure to be honest mate the rain that’s currently falling may dictate where and what. The bounty of the first half of season seems far behind us now it’s the weather lottery that is the second half of the season again!

With the promise of plenty of roach, rudd & perch at Hunts corner pond, I had planned all week to fish this small water at Linears today.

I popped into the local tackle shop yesterday and asked for a bit more info to be advised ‘it’s closed due to flooding!’

Booger, new venue needed. That proved to be quite a challenge considering the lack of still waters in the area that are allowing non members to fish...or don’t require a pre-booking.

About 8th on the list was to was one summer pond and I wasn’t over excited given the relatively lack of mixed species and success last time out. But at the very least it was a chance to get back out on the bank and try out the new feeder rod and reel.

Arriving just after 8.30am and the car park was heaving with anglers ready to hit the big gravel pits for Carp, I was surprised by just how busy it was considering the weather and time of the year.

I was setup and ready to fish at 9am with my choice of tactic a 10g maggot feeder, with double red maggot on a size 18 hook. Regularly casting every 5-10 mins whilst also feeding an additional line too.

Unfortunately this proved unsuccessful as did sweetcorn & casters and resulted in my first blank since I started Angling again. A few line bites but nothing more and it was the same for the other 2 guys on the pond too.

On a positive I felt like I fished better, tried to make things happen and casting was an improvement.

It's a hard time of year for angling in Oxfordshire so wouldn't worry too much. As our fishing is mostly based on rivers, canals and either natural or natural styled stillwaters fishing is generally hard countywide when the temperatures are in single figures.
Last edited: Dec 12, 2020

Cheers Silver, i was pleased with how I fished and in normal conditions I think I would have done ok. I wasn’t downbeat as blanks happen, it’s part of fishing.
I’m fishing the test next week with a couple of experienced anglers, planning to pick up on some tips on how to trot with a stick float and that will then open up loads of options for next year on the Thames.

That sounds great mate very jealous! You’ll catch on the test for sure unless it really rains a lot. The grayling and trout will feed in almost any weather so looking forward to hearing how you get on ??
S

Thames is in fine fettle just now and will get better this week.

unfortunately I’m doing Jury service - so can’t get out......

squimp said:
Thames is in fine fettle just now and will get better this week.

unfortunately I’m doing Jury service - so can’t get out......
Click to expand...

It was certainly in reasonable nick in places yesterday (still racing in others) but still too cold for much to be feeding reckon it needs a couple more mild days. From what I've seen no ones been catching much apart from chub save from a couple that landed on bream. Reckon Tuesday will be the day this week when it's warmer and a bit of today's rain will have run off. Unfortunately my day off is Wednesday which is the first of days on end of rain by the looks of it so will be floody hell again soon I should think ?

Silverfisher said:
That sounds great mate very jealous! You’ll catch on the test for sure unless it really rains a lot. The grayling and trout will feed in almost any weather so looking forward to hearing how you get on ??
Click to expand...

cheers pal. I am really looking forward to it. For float fishing I was planning on going for 4lb mainline 3lb hook but one chap suggested going heavier because of the trout..any thoughts?

I reckon that would probably be alright. That's usually what I use on the Itchen but test trout do tend to be bigger I guess. Start from there and see how you get on I reckon.

A hard day with a nice reward