No it was this mate. 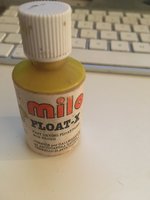 Have thrown it now.

Anyone still got one of these ?? 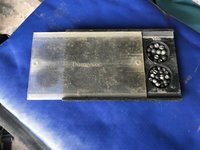 I love old tackle. It's good to keep using it.

I still have and use a Shakespeare Sigma 1880 Wand that I bought as a lad back in 1985..plus all the old green dinsmores shot in the tiny sizes..all comes in

That’s a good point on tiny shot. I don’t think I’ve ever used smaller than a 10 or 11 with 8s being the smallest I usually use so I’ve definitely got 10s and below that could be from near day one.
L

Those were the days
2

Arch said:
Anyone still got one of these ??

Yes,but just use the multi dispenser now.The lid will not come clean either due to use.
I also have a maroon coloured cast metal quadrant with a spring loaded peg that locates in holes at various angles to the quadrant,this was a early umbrella pole holder that bolted to the box frame,never saw many even in their day.

Arch said:
Anyone still got one of these ??

I had one for donkey’s years but sadly the lid warped and melted in the sun one particularly hot day.

Whenever you had a spill it would be epic, it would always happen when the lid was open the widest
M

Still using my old tackle. My good lady enjoys it too.

Not got too much of my old 1960's/70's tackle as most was swopped, sold or given away but still use these;

I have a Bruce and Walker 12L 12ft glass float rod which I bought new in about 1978 for £43 - then a lot of money! I still have it but compared to modern carbon rods it's horrible.

I have two ABU Cardinal 66 reels, one of which I bought in 1975 new for £27, then it was the Rolls Royce of reels. I still use them for pike fishing.

An Allcocks Match Aerial and a Fred Crouch wide drum Aerial which I collected from Fred's house, paid £40. Fred has sadly passed away, he was a nice man.

Several old floats going back to the '50s.

I've picked up some rods over the last few years for sentimental reasons - rods I either owned or always wanted to own as a kid.
I have tried all of them and may have a play with them again in the future but they're not rods I'd choose in preference to their modern equivalents.
Shakespeare Strike 13'
Shakespeare Match International 12'
Shakespeare President (the Mark I version) 13'
Shakespeare Alpha 12'
Henry Aiken Mistral DeLuxe II 12'9" (needs reringing)

Old rods that I still use regularly (by regularly I mean once or twice a year perhaps ) include:
Shakespeare Alpha leger (9'6") - my goto rod for skimmer fishing with a swingtip - lovely and soft - eliminates hook pulls.
Hardy 12' spliced tip float rod (actually mines the Bill Knott copy) - light float fishing in rivers or stillwaters
Daiwa 11’ 1.5lbTC Carp MGC211 - used to have a pair of these - used for many years as my only big carp / pike rod

Older rods that see the bank more regularly:
Drennan IM8 Super Feeder 12’ - been 'replaced' about three times but it's still first or second rod out of the bag
Daiwa Amorphous Whisker Waggler Special AWM 13W 13' - bought this second-hand a few years ago and it's my goto rod for bigger wagglers and slider fishing.

And the oldest usable pole I've still got (1980s?)
Century IM3 14.5m 'put-in' pole - before dedicated carp poles became available this used to travel to Ireland with me every year - line to hand fishing at anything up to 10m with flick-tips or a power gum shock absorber.

Got a couple of Shimano Baitrunners and a Daiwa 1657TDM that I bought around 1990 - I don't really consider them old but some might.

Terminal tackle wise I've got a converted Optonic somewhere and a fair number of 40 year old floats - Drennan slim sarkanda wagglers, John Dean & Pete Warren stick floats, Ivan Marks wagglers and swingers, Makin Canal Greys and Italian pole floats that I bought whilst on holiday there in the late 70s as the selection available locally was zero. The Drennan and John Dean floats are the most likely to get wet - in fact a couple of the latter are currently on winders ready for use.

Forgot about terminal stuff. All my disgorgers are at least 20 years old, a ruck of pink ones chosen by my then 2 year old daughter but most 40+ years old e.g. a black Scott's tackle one when they were on Bell Hill in Bristol, the brown one i won as part of a prize in a junior match at Bitterwell lake... Rod rests, an old red/ metal bread punch, shot dispenser, feeders, bombs, shot, the wooden float box I won at the Silver Dace juniors.

I even found a packet of size 30 Au Lion D'Or hooks that were part of a job lot of stuff I won from Angling Times when I was part of their Kingfisher Guild. They looked bloody small then, I can still see them but who would bothering if you had to resort to that?
D

Not fished the Trent or any other river for that matter, for yonks, but if I did my first go to reel would be a 508 without doubt.

I had some nice rods in the 70's & 80's, Milbro Enterprise, ABU counterstrike, along with some reels including a Mitchell 410, and I have no idea what happened to them. Don't think I sold them, nowhere to advertise back then, may still be at my mums somewhere, I'll have to go and have a look.

Just two old items I only bought over the last for years..

Abu Cardinall 55 Reel must put some new line on it and try it out, was the original carpers reel I understand. 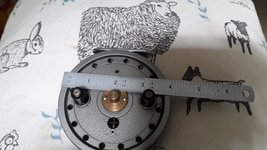 Scribe said:
Just two old items I only bought over the last for years..

Abu Cardinall 55 Reel must put some new line on it and try it out, was the original carpers reel I understand.

Hi i was wondering if someone could put a value on this? found in my grandads old tackle Box,
It's got the case, rod rest adapter and a small 4 bladed fan that i assume is for the internal sensor 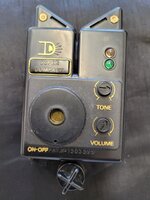 Old tackle that I bought new, and still use,

Match Aerial bought in 1968, ABU 501, bought mid 70s, ABU 44x bought mid 70s,
Winfield 10' 6" leger rod f/g but with a lovely action bought early 70s, Milbro 13' match can't remember model, but again great action bought late 70s, Milbro Enterprise, glass but great for tench on the float, early 70s. Large black Shakespeare box, and Octoplus legs, bought late 80s. Loads of floats including a few of my old favourite cork on goose avons. Forceps, bread punches, a few rod rests all from the 70s/80s. To cap it all, during a clear out of some old boxes, I found a couple of packets of 'Blue Divil' hooks to nylon, that I think went out of production back in the early 70s. They were tied to blue nylon, had an off set point and were the sharpest hooks around back then. After testing I tried them out on the canal last season, and landed some good decent and perch. That's what I call value for money!

Most of my other stuff was bought second hand, except for nets, and a couple of rods.

TrickyRicky said:
Hi i was wondering if someone could put a value on this? found in my grandads old tackle Box,
It's got the case, rod rest adapter and a small 4 bladed fan that i assume is for the internal sensor

I'm still using a pair of special compacts
What you have there is worth £20-£60 according to eBay sales but I think they are still perfectly good alarms.

D
Life In The Old Shakey Box Yet
2

L
Is it still available?
2