I'm off the mark, it's been some 15+ years since I was last bankside but after my recent tackle acquisitions over the past few months I decided today was the day...I even had company, the wife and the woofster.

The pole is still awaiting some elastic so decided I'd go down the waggler route and just see what happened, it was also to give me a chance to get a feel for it all again; was my kit in the right drawers, was my positioning right, what did I remember, the list goes on.

We often walk the woofer down the track so knew it was already quite weedy but unbeknown to the wife I'd scouted out a peg on last night's walk, we still had a ride up and down but opted for s relatively clear peg with a small amount of surface weed.

Setup successful after dropping one too many stotz whilst trying to get them on the line but then came finding the depth. As I cast in the waggler the wind lifted and you could also see a tow on the canal, this played havoc finding depth and couldn't for the life of me remember how to remedy it - one to Google for later. Taking in a couple of Andy May and Jamie Hughes tips around using stotz around the waggler certainly helped. A few adjustments and tangles later and we were fishing...

After a couple of dubious casts we were finally in, full positive bite and there it was...the answer to "why do you just want to sit on a bank all day", it wasn't anything special but it was a fish...I hadn't blanked on my first trip back, I was over the moon!

That said I kept going and came off after about 2 and half hours, bagging 5 skimmers and 2 perch, nothing incredible in size but I was surprised I caught at all to be honest!

So there you have it, one happy chappy, a few adjustments to make to setup and layout of gear (also need to find a Mega Tray Knuckle as broke that before even getting gear in the car), need to tweak seating position slightly but overall, loved being back on the bank and thanks to the wealth of knowledge on this forum it made it so much easier.

So here's to plenty more sessions and write-ups! 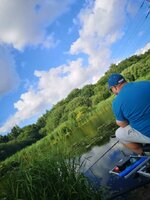 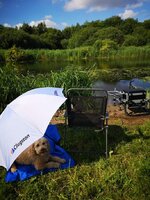 It’s an amazing feeling to be back fishing after a long break, you’ll wonder why you ever gave it up. That’s a lovely looking canal there, bet there’s some nice tench swimming about in all that weed.

. Loving the dog brolly. Well done. And nice to see you’ve thought of your dog. Respect.

Another evening at the club lake