An evening only fish here yesterday. It’s a new venue I’ve only just started fishing (due to the current situation) despite it being only 10 minutes away. It’s a basic campsite set in woodlands and fields with several pools; a main pool with decent carp and some sturgeon, a match pool with smaller carp, a small trout pool and some tiny beginners pools.

The intended pool choice before arrival was the match pool for hopefully guaranteed action and less camper noise. It turned out I was the only one fishing it.

There were fish cruising and taking loose mixers immediately so the main plan of attack was banded mixer with a second float rod dropped into the inviting weedy margin to the side. Both rods produced steadily, the final tally was 16 carp from the surface and 5 carp from the margin, from 3lbish to a pair of 9lbish in the only double hookup.

A return to the main pool yesterday afternoon, starting in the swim where I caught My first sturgeon last week.

It fished completely differently this time. No sign of the sturgeon, and the carp were pretty uncooperative too. A few good bites were missed on the float rod with no contact on the strike before a similar bite produced a 1oz perch. Another 1oz perch and a 3lb stockie carp were the only other takers. The second rod fished on the method to the island was slow too, two bites produced an 8lbish common landed and a stockie that was lost close in.

A move to and wander along the far bank produced another stockie and some crayfish bites on the float, with three small ones landed. A late bite in the margins resulted in a 10lb mirror to at least send me home a bit happier!

A one rod wander around all the pools here yesterday afternoon. I had heard that there were good silvers in the tiny beginners pools, so wanted to try those for the first time. They were tiny too, the two biggest are pictured, the third was even smaller.

Inevitably they only produced carp, with seven from 3lbish to 6.5lb, with a much bigger carp spotted.

A move to the trout pool didn't produce any bites, and then a wander around the main pool and the match pool produced another seven carp of a similar size for a session total of 65lb.

It was very quiet camper wise, with only one fishing across all the pools.

A long afternoon here yesterday. Not a ripple on any of the pools which made fish spotting easy early on in the sunshine before the clouds eventually came. The match pool had plenty of carp hanging below the surface and I had four shallow fairly quickly from several swims. If I had stayed there I would probably have bagged up but I decided to wander around the rest of the pools. The beginners pools were unusually slow, just one carp and three tiny perch. A full circuit of the main pool produced another four carp with the best of the day at 12lbish.

A first cold weather fish on the main pool here yesterday afternoon. I wasn’t sure what to expect as the only silver fish I’ve caught from here so far were ounceish perch, so if the carp didn’t play it was likely to be tough. 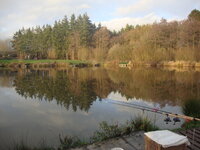 I started on single maggot on the float rod in about 9 feet of water, and surprisingly two early bites produced decent roach with the biggest about 8oz. The next bite had something much bigger on that felt roach like and just as I was dreaming of a monster roach it started to feel small carp like and a 2lbish stockie common came to the net . The perch then turned up big time and the next 30+ fish were all small perch with no variation in size all all. 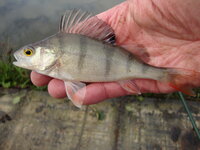 A switch to a bigger bait in the last hour and a half produced two odd sideways bites that both produced a 3.5lb sturgeon and then no further bites as the light was fading. 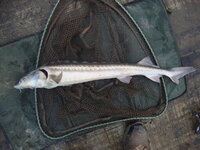 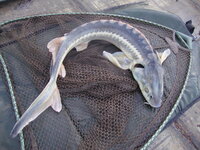 The method feeder rod didn’t produce consistently in one spot but flicking it around produced four stockie carp but that died in the last hour too.

Overall a better result than I expected, so I'll be back there again this winter.