Not a Feeder In Sight

Match 10 of our much altered and delayed season and yet another change to the original calendar – we should have been fishing our Trout Cup at Lockwood Beck Reservoir, however that’s currently shut for maintenance works so that will be fished at the back end of March instead. Back in June we should have held our float-only match – the Tontine Cup – at Grange Farm Pond near Thirsk however they hadn’t yet reopened – fortunately they have now and were happy to accommodate us.

The Tontine Cup is unusual in that not only is it float-only, it’s also decided on points – one point per fish and one point per ounce – so the top weight may not lift the trophy (although in practice often does). It’s one of the oldest trophies that the club still fishes for and has been decided on a points basis for as long as I can remember – at least forty odd years. 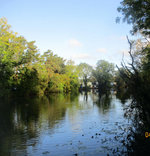 We had a fairly small field of nine booked on, so I was able to spread the pegs out reasonably well – four on the road-side (where the new bailiff has done a grand job of reconstructing some of the more rickety platforms) and five on the peninsula that splits the big pond from the smaller one.

Following the draw I found myself just at the base of the peninsula, with Jim to my left and Tink just out of sight to my right. I could see Kev & Paul opposite but everybody else was out of view. Grange Farm is an old brickyard I understand and still has depths to eight or nine feet, so I’d knocked up a couple of top four rigs the previous week – identical other than one consisted of a bulk and two droppers and the other spread shot for fishing on the drop. I also set up a couple of standard top three rigs – one to fish at six feet deep and one at three – fishing in mid-water here can be very productive – especially in the summer, although considering there’d been an inch of rain the previous day I wasn’t sure if it would be as effective. I also had a couple of waggler rods set-up which I’d switch to if the pole proved unproductive and I couldn’t be arsed holding it any longer. Species in the pond are mainly roach, perch and skimmers plus proper bream, odd tench, a few carp and pike. 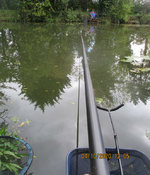 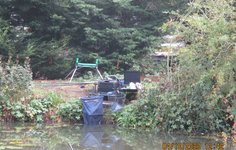 Starting at an easy 10m put me in 9’ of water and I just pinged maggots at the float fairly regularly to see what response I got. I snared a couple of small roach quite quickly but they were very small and in the hope of attracting a few skimmers I potted in a nugget of groundbait with a few casters. Whilst that settled I had a quick look over my shorter line adjacent to the marginal lilies where I had about 6’ depth. With nothing else forthcoming I went back to the longer line and caught more small roach and a couple of micro-perch.

I was catching relatively well with regard to those I could see – Kev had a small skimmer but then Jim caught a couple of net roach – 6oz or so followed by Paul getting a skimmer over a pound. 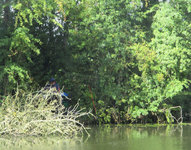 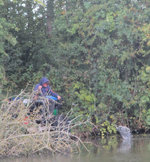 I was going to need a lot of roach to overhaul that and I wasn’t catching very quickly. Liquidised bread with bread-punch on the hook has always worked well on here in the past, so dropping back from my main line I introduced a couple of golfball sized balls before offering a morsel of white, sliced. I caught a bloody vegetarian perch.

Putting some more groundbait out onto my main line I went for a wander to get some action shots and see how those I couldn’t see were fairing. 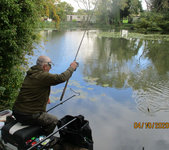 Steve up on the end peg on the roadside was getting plenty of bites on the waggler and although he was missing a few he was catching steadily enough – nothing of any great size though. Barry was struggling – his Stillwater Blue staying stubbornly above the water and only a single fish was gracing his net. Paul had a couple of decent bream and just as I got to his peg he found himself attached to something that was thumping in a most unbreamlike manner. On light elastic and a 22 hook it gave him a couple of hairy moments before he slipped the net under a big tench. Really fat and broad across the back I reckoned it was a good four or five pounds. 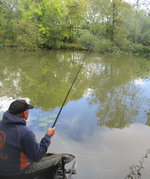 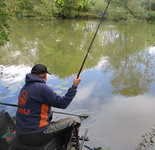 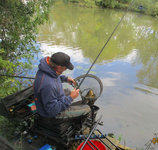 On my side of the pond Steve on the other end peg was catching well and had some ‘proper’ skimmers, although neither Tink nor Frankie had a great deal. 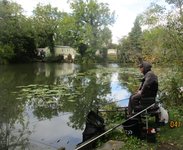 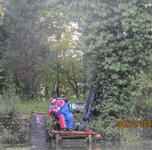 The groundbait I’d introduced earlier hadn’t improved the stamp of fish I was catching but I persevered in the hope that something more substantial might come along. I did find that altering the depth regularly improved my catch-rate – I’d get a couple at full-depth, a couple 6’ deep and then a couple 3’ deep before a micro-perch would signal the roach had disappeared and I’d start again. The bites were really poor, just dipping the bristle a fraction of an inch or holding the float up if on the drop. I gave the waggler a go late on and despite using a fairly thin tipped insert waggler I got lots of smashed maggots without any apparent indication.

At the end I reckoned I had possibly 20 fish for about a pound in total - the only skimmer I did find was decidedly of the junior variety and didn't appear to have any chums. 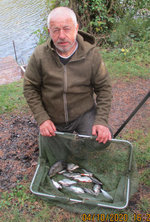 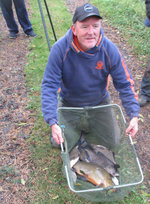 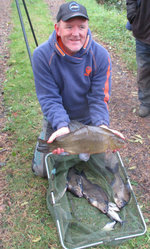 The tench only had one eye and the Dave, the lake owner, had seen it before and reckoned it would weigh 6lb - he wasn't far out as it pulled the scales down to 5lb 15oz - the biggest tench ever caught in one of our club matches as far as I can remember. 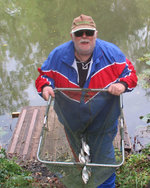 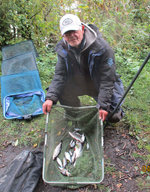 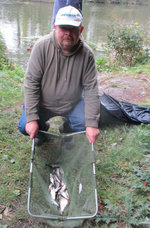 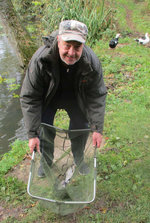 Finally along to Steve on the other end peg and he'd certainly caught the most fish, including some proper bream but fell a good way short - his 32 fish weighed bang on nine pounds and gave him 176 points 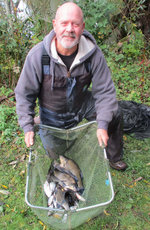 Next match we're fishing Renny Lake - the smaller of the two lakes - on October 18th, followed by the annual pike match which, following our inability to find any pike in Grange Farm last year will be on the Tees at Bowesfield which has been 'plagued' with pike all season - pike which will no doubt vanish when we turn up

Forgot to add this: 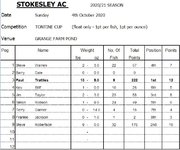 Do you ever fish the country park atbPoolsbrook?

GeeTee said:
Do you ever fish the country park atbPoolsbrook?
Click to expand...

Never heard of it - is it in the north-east?

Simon does the best write ups ever. ?. Loving the pic of the guy on the other bank leaning into what must be the biggest fish in the pond. ???
G

Simon R said:
Never heard of it - is it in the north-east?
Click to expand...

sorry, my mistake. I’ve muddled up Stokesly and Stavely!

I enjoyed reading that! Thanks.