So you probably end up buying the wife a new car and then paying for his to be repaired as I wouldn’t be as quick again to lend him the new one.

Sounds very much like a case of putting it into reverse whilst doing 50mph forward.
D

Will be intresting to hear back from Mick what caused this or part that failed , A few years ago I had an Audi A4 tdi seized solid and the cause was dual mass flywheel failure

its now in the garage, needed to be moved by a flatbed with a lifting arm and slings

estimated cost of repair using a secondhand salvaged gearbox is between £650 and £800, depending on what they find when they get it up on the ramps on monday

unknown whether the clutch is still good, but the managed to get it rolling by removing the half shafts I think
Y

Unless its recently had a new clutch it is usually recommended to have a new one if gearbox is coming out.

Have you took him off the insurance mate?

Dave Spence said:
Have you took him off the insurance mate?
Click to expand...

Nothing to do with me, ( the quandry of semi-stepfathering )

this has caused a fair bit of friction in the chippys household,

him being the only child and the apple of her eye, plus being the father of her grandchildren, still can do little if anything, wrong

his arguement as to it not being his fault for the reckless way he drives, is that, hes saved his mother, stating, can you imagine it happening while Mum was driving the car, it was far better that it happened while he was in it, because it would of happened anyhow" 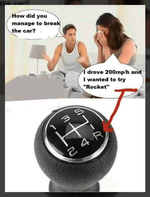 mickthechippy said:
Sometimes doing someone a favour, is a pretty poor choice

Wench, that is her of the flame hair and quick temper, was asked by her son iffin he could borrow her heap of korean car yesterday early evening to attend a hospital appointment

yes she says, being as he is a listed driver on her insurance policy, you may, So she duly hands him the keys to the tiny hyundai

off he goes, up the motorway towards Ashford town in the overtly powerful roller skate

half hour later, she gets a call, has she got breakdown insurance, ?

What, Why, wassapened ? were the questions !!!!

turns out the Emmerson fittipaldi no mechanical sympathy, car breaking herbert has blown the bloody thing up on the M20 slip road

more questions, and answers forthcoming, "I was only changing down, when there was a big bang, loadsa smoke and the car came to a sudden halt" he says, whilst he is standing there surrounded by two plod and a pair of the motorway support dibbles

gave him the number of the green flag service, and they turn up just past 9pm, have real trouble getting it on the lowloader and convey him and the car back here, the problem is, our garage is on a locked and gated industrial estate, which shuts at 7pm till 6pm the next morn, so the car is left elsewhere, close to the estate with the hope that the fixing garage can pick it up the next day, will need a spectacle lift or suchlike,

on the phone to Nigel the garage owner early doors, nice guy, comes out straight away to pick up the keys and investigate how to shift it to the garage, half hour later, rings me back, he cant shift it, cant get it on his recovery truck and has no spectacle option

No probs, leave it with me, so back on the phone to green flag, another nice guy, bitta talkin and explaining the previous nights shenanagins and its arranged that they would liase with nigel at the garage to pick up the key, and get it recovered there

looks like problems solved, though talkin to nigel, it aint gonna be a cheap fix, might well be a scrapper due to costs against value (09 hyundai i10)

spoke to the son and guess what, It aint his fault !

notwithstanding, the bloody car is hers, so every squeak noise etc its ever made has had me booking it in for general service no matter what an its been pretty reliable up to now, less than 60k on the clock too

Get him a Taser, tell him to put it in his trouser pocket and to reach up for things, it won't sort it, but watching him would make you feel better! (shame about the car)!
B

Tell him you have a black box recorder fitted to any other car you lend him, and will interrogate it if any problems. Sounds to me like dropping too many gears slipping off the road. Tear-arse. Or even get a black box fitted

plus as it was due in a month, MOT test another £60 with a couple bits needed

shes off driving it around to check it out,
D

He’s a liability. I wouldn’t let him anywhere near a vehicle of mine. Make him walk. Tell your Mrs if she lets him borrow it again and something goes wrong, you are not paying for it.