So after a good session from my favourite spot on the medley stretch of the Thames on Saturday I decided to book today off work to have another to go. Got to make hay before the floods and frosts and all that. The river was up a couple inches after yesterday’s rain but still in good nick and I ended up having a session spookily similar to Saturdays. They say no two days fishing are the same and I guess today wasn’t as the fish came in peaks and troughs rather than the steady stream of Saturday but the final result was very similar.

Started fishing about 8.20 in a proper downpour which soon cleared up to lovely mild and calm day until packing up about 2.40 after spending the whole session on the stick. In that time I had about 50 roach, about 20 dace, maybe 10 bleak and 5 chublets so probably only a handful of roach and a couple dace less than Saturday which was probably down to the 40 minute shorter session as much as anything. With those few fish short it wouldn’t have amounted to comfortably 15lb plus like Saturday but probably still crept over the 15lb barrier so another good result and therefore enjoyable session. Most the fish came in the first and last third of the session with the middle third quite slow. Pike weren’t a huge problem today with only 3 attacks although one did take me half way across the river due to the increased flow! I also bumped into another maggotdrowner but I’ve had a mind fart as to what his name was on here so apologies if you read this before it inevitably pops back into my head ??

As usual all fish were caught on the 13ft drennan acolyte ultra float rod paired with the drennan 7 series 3000 float reel loaded with 3lb maxima. This was to a 5bb drennan stick to initially a drennan silverfish size 18 to 2.5lb hook to nylon which I changed to a size 18 to 2lb version during the slow spell although I’m not sure whether that was the reason for the sport improving again or not. This was set up at a roughly dead depth in about 5ft of water. Although I tried hemp and bread that didn’t work today so the successful hook bait was single red maggot over loose feed of hemp and red maggot. I did put in a couple of maggot and hemp laced frenzied hemp groundbait balls during the slow spell although again no idea if that’s what improved the sport or not but probably was more likely that than the hooklength change.

My grandad was with me again and had tried to reproduce his all nice roach feeder catch from Saturday but really struggled to hold bottom in the increased flow. Still got maybe 30 fish of mostly roach with a few dace and gudgeon on a mix of double red maggot and 6mm punched bread but it looked hard work. I have just bought him a stepped up feeder rod for such conditions but he only went and left it at home!

All in all another good session (certainly was rather spookily similar to Saturday’s) so I’m pleased to have justified booking the day off to go. Next session will likely be Sunday as Saturday is forecast proper windy. Won’t be on medley though as there’s another big match on like last Sunday, from which I’d imagine will see big weights like last week again, so I will probably go Clifton or Northmoor.

Standard pics of the swim at the start and end of the session and a few roach which show the rough stamp/size range from the afternoon but they were smaller in the morning. 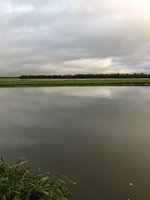 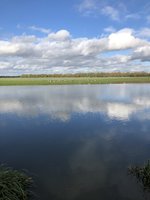 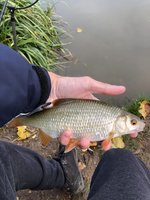 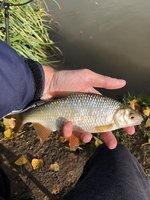 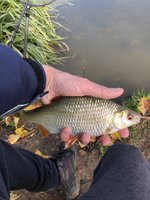 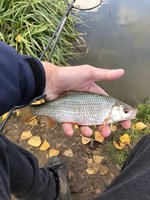 Thanks mate, the Thames has been pretty kind to me this season. That spot alone has brought me half a dozen 10-20lb bags in the last couple months or so and I did about as many similar bags again from a couple spots on another stretch earlier in the season. Very lucky to live by such a productive river ??
D

Well done silverfisher, good to meet you and your grandad

drw said:
Well done silverfisher, good to meet you and your grandad
Click to expand...

Was nice to meet you too ??

You might have brought me luck today as that roach I had when you came by the second time was not long before the start of the resurgence after the lull that started with the pike from when you first came by ?

Bit of a sickener being back at work today as lovely weather again so wouldn’t have minded another go! Still only one day til the weekend I guess.

SF. Do you find that bread works a bit better with some colour in the water on the Thames?

Rick123 said:
SF. Do you find that bread works a bit better with some colour in the water on the Thames?
Click to expand...

Good stamp of Roach there, nice one!

matt said:
Good stamp of Roach there, nice one!
Click to expand...

Thanks mate, I was thankfully able to get a lot of good roach fishing in this season before the frosts and floods ??

Cracking roach there Silverfisher and a great read. Thanks for that.

tipitinmick said:
Cracking roach there Silverfisher and a great read. Thanks for that.
Click to expand...

Was only about 6 weeks ago but those days of good weather, good river conditions and good fishing seem ages ago now that we are well into struggling season ?

Have a good long look at my latest video on fishing the moving bread feeder - see the video section - as this method was developed on the Thames at Oxford and is deadly, and can be used in conditions that are far from conducive for floatfishing. Suspend your ideas on needing 60gram feeders and learn how to use tiny feeders, a big bow, and breadflake on a size 10 and see if you can't get a really big Thames roach - this method has produced Thames 2lbers.

MarkW said:
Have a good long look at my latest video on fishing the moving bread feeder - see the video section - as this method was developed on the Thames at Oxford and is deadly, and can be used in conditions that are far from conducive for floatfishing. Suspend your ideas on needing 60gram feeders and learn how to use tiny feeders, a big bow, and breadflake on a size 10 and see if you can't get a really big Thames roach - this method has produced Thames 2lbers.
Click to expand...

My grandad sort of gave that a go on this session seeing as he couldn’t really hold bottom. Picked up a few roach but not in the number or sizes of the session a few days earlier when he could hold bottom. With a bit of refinement I’m sure we can get it working though.

If you do try the method you need to be ruthless in your approach. Leave the maggots at home, take only liquidised bread for feed and bread on a 10 (not a 16, 14 or 12!) for bait. Fish really small feeders with a BIG bow, don't get too ambitious in casting, experiment with weight of feeder so that it holds and moves, a 12ft quivertip rod with carbon quivertips works best. Be prepared to rove, giving each swim an hour or so and then moving if not catching. I've got it to work well on Medley, the Channel and Folly/Donnington.