I had a good day yesterday at Newbiggin, near Chapeltown in Sheffield.

After a fruitless Friday trying to find a tackle shop open, I wasn’t quite sure whether to go. Then I had a brainwave and remembered that Barnburgh lakes have an on-site bait shop, so a quick call told me they open at 7am. I didn’t fancy fishing there though, matches were on with just a few pegs free for pleasure fishing. I wanted something a bit more natural than an F1 race with people on every peg. So I bought a pint of maggots and some micros and headed off.

First option in mind was Westwood reservoir near Chapeltown. I got over there for 7.30 to find the gate still locked, which scuppered that plan. MDs resident @Warden has since told me of another path to get in, which will help next time I’m there early. Only having until around 2pm, I drove the short trip to Newbiggin instead.

The lake was empty on arrival, and very cold. There’s about 12 pegs along one side of the lake, with about 30 yards to the Reed and tree lined far bank. 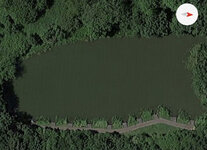 I chose the second to last peg on the right. It’s a nice little venue that I used to fish after work, my office is only across the road from it. I’ve had some decent sized carp in the past and had a lot of success fishing pole right up to the reeds on the right. I don’t have a pole any more so I set up a 2.5g loaded crystal insert waggler, locked with 2bb and four number 8s down the line. 4lb mainline to 2.5lb ten inch hooklength and a B911 F1 size 18.

I spent some time plumbing up and found around 8 foot of water around halfway out. Deeper than I expected, as it’s only 2-3 ft a couple of rod lengths out. 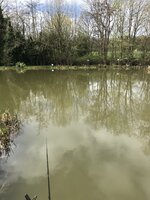 I soon got into a rhythm of firing 8-12 maggots out casting, watching the number 8s settle to the bottom. Bites were instant and I soon had a chunky roach in the net, more roach followed, then the skimmers turned up. I’d upped the feed to try and keep them on the deck. After missing a few bites on the drop. This seemed to work, and I consistently caught within two minutes of the bait settling. By 12.00 I was up to around 20 roach and 25 skimmers, with a single ide of around 2lb. Double red maggot worked best, whites or singles only picked to the smaller fish.

It was bitterly cold but good fun, and nice to fish the waggler at distance. For the last couple of hours I tried the a small method with micros and banded 6mm. Picking out the peg 12 sign on the far bank, I managed to land my feeder a foot from the reeds every time, which was pleasing. This line produced three carp, between 3 and 5lb. Nicely scaled and coloured mirrors. Bringing the day to an estimated 26lb of fish. I could’ve doubled that at Barnburgh, but this was more pleasing to me.

I only took one photo of fish, my hands were covered in slime and numb from the cold! 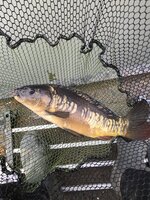 That sounds like a good short session, with the added bonus of having the pond to yourself!

WickerDave said:
That sounds like a good short session, with the added bonus of having the pond to yourself!
Click to expand...

That didn’t last Dave, another four or five turned up a bit later. Most stayed up at the other end near the car park though so it was still pretty peaceful.

Netted begining of last week. very peaceful venue one of 4 very good venues Chapeltown run within a 5 min's drive from each other.

Netted begining of last week. very peaceful venue one of 4 very good venues Chapeltown run within a 5 min's drive from each other.
Click to expand...

That explains the decent stamp of roach yesterday then.
I was speaking to the bailiff who mentioned the netting, he said that the majority of the carp had all packed themselves into a corner to avoid the net.

It’s very good value for a £5 day ticket, I probably should buy the CDAA book as like you say, all four of those waters are decent.

Yes unfortunately we are an angling association have to rent the waters seperately and each one has its own permit (apart from the Nancy Pond) + the size of Newbiggin permits are very hard to get hold of.

Used to catch a lot of crucians close in on there and some tench if you could secure one of the end pegs.

But as with all chapeltown waters, the emphasis just seems to be with carp now.

TT, there’s a new tackle shop on station road in chapeltown, doubles up as pet food supplies and was open yesterday, also Barnsley angling centre on the main road up through hoyland

davepellet said:
TT, there’s a new tackle shop on station road in chapeltown, doubles up as pet food supplies and was open yesterday, also Barnsley angling centre on the main road up through hoyland
Click to expand...

Thanks, I didn’t know that. I used to use the previous tackle shop on station road until they moved premises. Hopefully Paul’s Tackle will be open again in a couple of weeks, that’s only 5 mins from me. 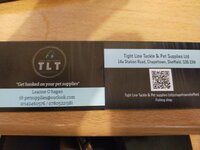