Hi Maggotdrowners, joined today, looking forward to reading anything on small rivers. Recently moved from Birmingham to the North Cotswolds, now enjoying the delights of the Warwickshire Stour in the Shipston to Stratford area. Used to fish rivers such as the Alne, Arrow, Teme, Warwickshire Avon and the Severn. Though the Severn not quite a little river. Favourite method Stick float, but more often any method that gets a bite.
Today I managed a couple of hours on the Avon at Hampton Lucy, the Brook section. Though part of the Avon, in effect it is a small river venue that I first saw yesterday, and fell in love with straight away. It has been probably 5 years since I caught a river Barbel. This place screamed Barbel and big chub. Aquarium like water flowing over gravelly bottoms with patches of streamer weed. When I woke I thought I can't wait to give it a go. My partner who has to drive me every where. (Waiting on the DVLA to renew my licence after a medical condition) didn't take much persuading to go. She is a fishing convert and loves it.... if catching. She has never seen a proper barbel on the bank. We saw one yesterday gliding over the gravel to settle under a overhanging tree. So taking just enough tackle to do the job we arrived at midday. Picking a peg we could both sit in comfortably, a couple of swims down from a weir that starts the section. Big slack on the nearside all the flow on the far bank. Simple straight lead stopped by a swivel a dacron hook length with a 10 hook and 4 elips pellets supeglued to the hair. Handful of mixed size pellets chucked into the far flow on arrival. Then after setup cast down towards a far bank tree. Tap Tap Tap for 15mins. My partner bless her was just nodding when I leapt at the rod, and frightened her awake. Yes my tip had bent round and after a dogged fight a 6lb 6oz Barbel graced the net which was handled beautifully and netted first time of asking by my partner. I was more than happy with the result. This was followed up by a 3lb 8oz Chub which was also great to see. Life is good!! 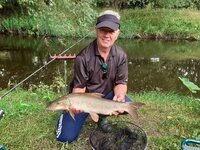 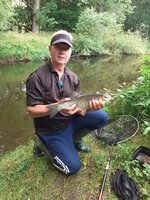 Hi and first off, Welcome to the Forums.
Nice first post and pictures, seems that you enjoyed a lovely session, well done.

Welcome to the forum buddy

. That was a good read and two brilliant photos. Lovely fish, well done.

Welcome on board, and a great report with photos

Hi all, thanks for the welcome. The photos are courtesy of my significant others Samsung phone. She now wants to take up photography. Thankfully she was only joking.

Welcome and thanks for posting such a good report. Lovely looking small river there!

Welcome aboard mate. Looks a lovely spot & a couple of great fish there.
Y

Welcome to the forum! Great report.

Welcome aboard mate... a lovely catch there...

Welcome to Maggotdrowners, mate.
Lovely stretch of river.
Enjoyed the report and photos.

You look remarkably smart for an angler

Welcome to the site mate, nice report and photos, looking forward to reading about your next adventure.

Welcome to the nut house!

Thanks once again, SeanB you made me smile describing me as elegant. my partner generally describes me as "Grubby" after a days fishing.

Welcome and a good read on your session.

Sounds like a great day, respect to you for becoming a site supporter from the off

Thanks Dave, only way to go I thought.

B
Intruder in the swim.