WickerDave said:
Finally a decent catch result this afternoon after our move from Leicestershire to the Shropshire hills just before Christmas.

The final tally was about 60lb of small carp in the 5lb to 1.5lb range and about 9lb of silvers, which were all roach in a range of sizes up to 12oz plus one bigger fish that looks like a hybrid. Most of the carp were on a method feeder with sweetcorn to the island, with the roach and 4 carp on maggot on the waggler.

Can you use keepnet for the silvers

@arnyking, unless they have changed the rules recently you can use keepnets for both silvers and carp.

They have put the day ticket price up to £10 this year.
A

ok thanks i wanted to give it a this winter, but its very slightly further than local but once the restrictions are eased I will be up there

A last chance to fish before the next cold spell, so back here this afternoon. As I was setting up in my favoured island swim a couple of carp rolled in the calm water, so this looked promising! 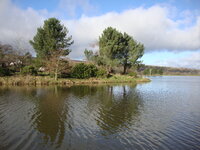 The first cast on the method feeder produced a small carp after 15 minutes, as did the second. The third cast wrapped round almost immediately and what I was expecting to be a smaller carp turned out to be a nice roach of 1lb. 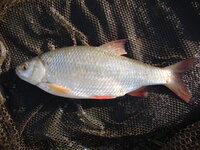 The method feeder rod produced steadily all afternoon with the odd slow spell, mostly on an orange wafter with three on a bunch of maggots and one on sweetcorn. The final tally on this rod was 13 carp to 6.5lb and the single roach. 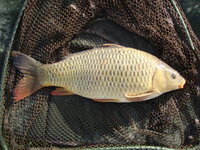 The second rod started as a float rod but the squally breeze soon got up and this was changed to an inline maggot feeder. The roach didn’t show to start with and the first two fish were small carp, eventually followed by a run of 10 decent roach topped by another 1lb fish. 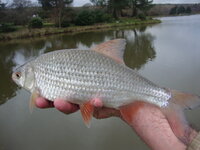 The above pictures make it out to be a calm sunny day, in reality it was dull, breezy and drizzly for much of the time, the final photo about sums it up. 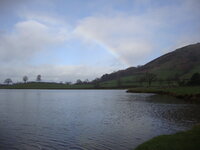 Some lovely roach again there

Great days fishing .Fished there a couple of years ago after reading your write ups will be there soon . Stay near montgomery in the summer ( static caravan site ) but obviously with lockdown can’t go

Every time I see your posts I’m envious of this water you fish..looks idyllic

nice write up and pics as always

Great catch as always Dave. Do you ever blank??

The Landlord said:
Great catch as always Dave. Do you ever blank??
Click to expand...

Here, nearly. My first ever trip there in early Dec 2019 only produced a 2oz roach late on, which was a bit disheartening as before we moved I’d found a YouTube video of bagging up there in a previous Christmas break. The second trip there a month later was the 69lb catch in the first post. Apart from the fifth trip which also only produced a 2oz roach it has been fairly consistent throughout the colder months.

Another afternoon here today, with the variable weather much like the last trip. 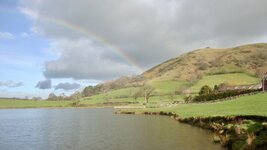 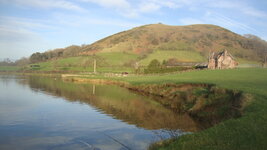 The first cast on the method feeder hooped round after 7 minutes and a 4lbish carp was landed. This looked like it was going to be a good day! But it then went dead. It was the same pattern on the inline feeder rod, a 4lbish carp early on and a couple of roach, and then that went dead too. I moved swim to the calmer water at the opposite side of the island for a few bite less casts, and then moved back to the original swim. This produced a few more fish and the final tally on both rods was 5 carp to 5lbish and 8 roach to 12oz. 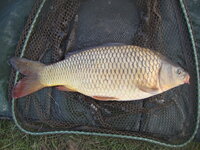 One double hook up with the smallest carp, a poor attempt at making an 8oz roach look bigger. 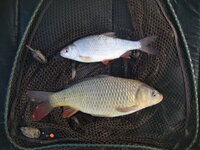 Wished I'd fished myself today as the weather turned out half decent didnt it but was forecast awful, try again tomorrow!

Slow here this afternoon on a mostly frozen pool in dreary weather. The only open water available was along the dam bank, which slowly widened as the day wore on. 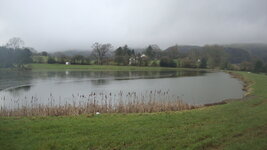 A couple of feeble knocks were the only early action before the first proper bite on the feeder after 75 minutes produced a blank saving 8oz roach. The next bite soon after felt like a roach too, but this was pulling back! It turned out to be a venue personal best of 1lb 8oz . 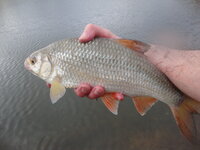 Another half dozen roach followed with nothing over 6oz, with a few missed bites and stolen bait. No sign of any carp at all.

I would rather that roach than any carp. Keep up te good work its mood lifting reading these reports

A return to the usual winter swim yesterday afternoon. 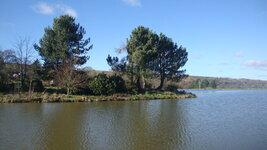 The first cast with a wafter on the method feeder rod hooped round after about a minute and a small mirror of 2.5lb was landed. Was a bumper session on the cards? The second cast sat motionless for about 15 minutes before a 6oz roach was landed. Then it really slowed down, despite changing baits and exploring the island margins. The only takers on that rod for the rest of the afternoon were all on a bunch of maggots, three 2lbish commons and a couple of roach with one of 8oz.

The maggot feeder rod was unusually slow, just a few knocks wherever I casted. I persisted with this for too long based on the big roach it produced last week, but eventually switched it to the waggler for the last hour and a half. This produced a bite a cast, but mostly from tiny roach in the half to one ounce range with a few better ones to 5oz, and one 10oz netter. Probably about 40 roach for 4lbish on the waggler. 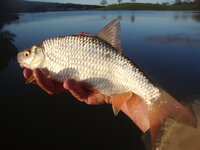 There were some carp crashing out in the open water far away, so maybe I’ll switch swims next time.

The other roach must have been tiny if they only amounted to 4lb with a 10oz and a few 5, 6 and 8 oz amongst them as you’ve got over half that there

The other roach must have been tiny if they only amounted to 4lb with a 10oz and a few 5, 6 and 8 oz amongst them as you’ve got over half that there

The 4lbish total on the waggler didn't include the three better method feeder roach, but yes, they were tiny on the waggler. About 20 were the half ounce fish, I don't think I've had so many of that size in a previous session there as there's normally a good spread of sizes. Still, it was nice to see the float go under regularly after the mostly motionless tips earlier .

WickerDave said:
The 4lbish total on the waggler didn't include the three better method feeder roach, but yes, they were tiny on the waggler. About 20 were the half ounce fish, I don't think I've had so many of that size in a previous session there as there's normally a good spread of sizes. Still, it was nice to see the float go under regularly after the mostly motionless tips earlier .
Click to expand...

Ah I see that makes sense I should have read more closely! Had visions of minnow sized roach for a minute which I’ve never seen before

And yes that is unusual to get that many roach that small. Not uncommon to get lots of sub ounce rudd but I can’t recall ever coming across lots of roach under even a couple ounce let alone under an ounce. Must have been a good spawn last year