New byelaws agreed by the Environment Agency will protect salmon and sea trout in the rivers Dee and Wye in England. 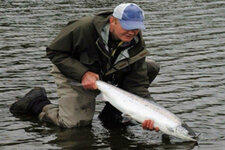 Figures this year show salmon numbers remain low, so every fish returned safely could contribute to improving the spawning population this autumn

The byelaws, some which will be in place until the end of 2029, mirror those introduced earlier this year by Natural Resources Wales (NRW) meaning the fish will be protected throughout the two rivers.

This now means all salmon caught on rod and line on the Dee and Wye must be released alive with minimum injury and delay.
Reducing the taking of salmon is only one part of the Environment Agency and NRW’s larger national programmes to protect salmon stocks. Actions taken by the Environment Agency and its partners that contribute to protecting salmon stocks include removing barriers, improving water quality, implementing better agricultural practices and addressing unsustainable water abstractions.

The Environment Agency and NRW are taking these actions because of the need to protect salmon stocks that have declined to unsustainable population levels in many of our rivers. The decline in the numbers of wild salmon, seen not just in English and Welsh rivers but throughout the North Atlantic, is a major concern and the Environment Agency is determined to protect the future of this important species.

Both the Dee and Wye have continued to see salmon stocks decline even with significant efforts by all interested stakeholders to improve their status. The extent of the decline is such that stocks are now approaching unsustainable population levels. The measures seek to maintain the economic value of salmon rod and line fisheries to the local rural economy while maximising the opportunity for salmon spawning. It is hoped in turn that this will increase the future numbers of returning adult salmon to these rivers.

On the River Dee, sea trout stocks have also declined in recent years and maximum sea trout landing sizes have also been agreed.
The Defra Fisheries Minister, RH Victoria Prentis MP, confirmed the proposed byelaws on 8 June. These byelaws will replicate the ‘Cross-border rivers Dee and Wye in Wales’ byelaws made by NRW and confirmed by Welsh Government which came into force on the 31 January 2020.
In addition, new controls on angling methods such as the use of barbless hooks and restrictions on certain baits will be implemented, in order to improve the survival of released fish so that they can contribute to spawning stocks. 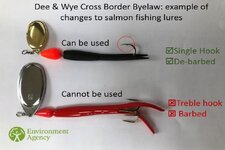 Measures have also been confirmed to help protect sea trout in many rivers in Wales - these will also apply to the Dee and Wye, with all rod-caught sea trout over 60cm to be released alive.

On the River Wye the new measures should be considered alongside the extensive catch controls that have been in place since 2012 and due to expire in 2021. NRW and the Environment Agency will be reviewing these measures and will formally consult on any new regulations in due course.

We’re concerned that the number of returning adult salmon continues to decline despite the current protection measures we have in place across the Dee and Wye. We will work closely with NRW to monitor salmon stocks, with a view to introducing further long term protection byelaws on cross border rivers if required following consultation, in the hope of increasing the numbers of this iconic species.

Every spawning fish matters. Even relatively small numbers of fish are crucial in order to recover stocks in as short a time as possible.

We understand the concerns of fishermen, but only by the use of immediate and robust action, with cooperation from others, can we prevent the collapse of salmon stocks.
Click to expand...

All of our salmon stocks are in serious trouble and have fallen to historically low levels. We believe that the new byelaws, along with a range of other urgent measures such as tackling agricultural pollution, improving water quality, improving habitats and managing potential threats from predators, are vital for the future of salmon and sea trout in Wales.
Click to expand...