Neville Park - oh how I have missed thee, gem of a free water

I’d driven past twice this week after work and seen no one on the water but quite a lot of fish rolling and topping. My lovely wifey then said late last night “why don’t you have a couple of hours fishing in the morning?”

Well not being one to turn up a chance like that the alarm was set and prayers sent to keep the weather mild. 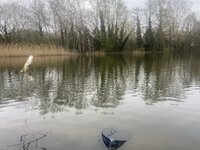 Arrived at 7:30am - car temp read 6 degrees with a light breeze so not unpleasant. Water level has dropped a bit giving 3 fishable pegs on the near bank so I chose to set up in the first one opposite the reedbeds. Plan was method feeder and if that didn’t work then pellet waggler.

Stopwatch set for 15mins and in went the first cast, dropped it on the money around 2yds short of the reeds. Settled down to take enjoy the quiet and watch odd fish flipping out of the water.

Reverie disturbed some 7 minutes later as the rod hopped across the rest head and I lifted into something very intent on burying itself in the reeds. A fun tussle turned it out into open water and a few minutes later the first fish of the session slipped over the rim of my net, a lovely pale common weighing 3lb 3oz which was to be the smallest of the session. 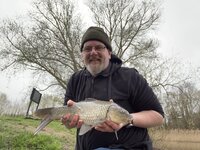 The session just went from strength to strength - the only 2 casts that didn’t get a knock we’re both poor casts that landed way too short of the reeds and sat there all the way to the timer.

Managed to lose 4 - just couldn’t get to the rod in time to turn them out of the sanctuary of the reeds where they spat the hook but did manage to bank a grand total of 12 up to 10lb 4oz. The bites were coming between the 4min and 7min mark and none of them were shy taps, on two occasions I thought I would be wading after the rod as the bites were so fierce.

I love that there is such a variation of colour from pale silver to rich gold and it’s great to see they’ve over wintered so well. 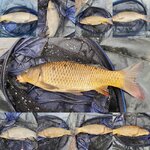 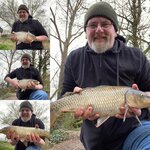 It was also a great first outing test for the 4m Maver Powerlite landing net handle I picked up as part of a joblot on FB - much easier than the 2m aluminium handle I previously used.

Might get to try the pellet waggler Monday for a bit of variety as I will have little ‘un with me hopefully if we don’t get the forecast snow & hail.
S

Nice one, that’s an excellent day’s fishing. I love a nice golden-brown common. You must be chuffed mate.

tincatim said:
Nice one, that’s an excellent day’s fishing. I love a nice golden-brown common. You must be chuffed mate.
Click to expand...

What a difference a week makes - Neville Park, Snodland