Well two down four to go.

What do you know about moorlands farm near Kidderminster.

I have never fished it before and have been told there is a bait limit of 5 pints.1 tin=1 pint of bait.

Can i fish the catmeat?

Any info or tips to be shared amongst all maggot drowners fishing the event.

Golfs a game for people who can't catch fish
A

Hi keith i fished moorlands last week on a match on the bank pool.
You are right about the bait quantities but to be honest it is plenty enough.From what i found out fishing with caster,worm and corn at about 6 to 8 metres seem to be the in thing at the moment but do not forget the margins. You can fish catmeat on the hook only
and you have to buy his pellets at the shop.I got my worms and pellets from there the price is fair and the worms are good quality.

The guy who runs it is a bit of a funny bugger but other than that the place is okay.

We are fishing Moors.

I think it is around 6-9 ft deep in places.Can you catch up in the water or is it best to concentrate on the bottom.1g - 1.5g floats should be ok for the bottom fishing but if you can catch up what size do you recommend?

Golfs a game for people who can't catch fish
A

i fished on island pool last saturday,it fished rubbish.
i saw them weigh in on meadow and the big weights (100lb plus) were on pellet fished shallow.
im no expert on there but from what i have heard fish around 13m with small float(dibber )with no shot on the line 12""deep with around 2 or 3 inches of line from your float to the end of your pole.the fish will probably hook themselfs so no need to strike at what will more than likely be liners anyway.use expander pellet,banded or some of the soft hooker pellets(ringers,juicy pellet)on the hook.
p.s
john talbot who runs the place is a complete t*"t
M

Keith and everybody else i've been trying to get hold of John at Moorlands to comfirm if any rules are different to what i've already sent you but unable to get hold of anyone other than the cafe and they don't know.

Soon as i find out any thing i'll post it.

Last time i fished Moors was last July and it was a toss up between on the deck and shallow as to the main attack.
Best lines were anything between 4mtrs and 11mtrs with the furthest being better shallow.

Best baits were pellet/corn/meat/caster/worm in no real order.

Regards float sizes Keith Moors doe's not seem to get much wind on it and unless we get a heat wave and the aireators are switched on it should not have much tow so you should be okay with light rigs.

likewise been phoning Moorlands to no joy.

There is a small piece in this months Match Fishing which may help.

Kev has fished it a few times in the past but I haven't had a chance to talk to him yet.

Golfs a game for people who can't catch fish
M

The following picture is of the RULES for Moorlands Farm.

ADDITIONS to the above are as follows:
2 keepnets MUST be used-Carp over 1lb in 1 & all other fish in the other.
Only feed pellets bought on site to be used (MAX 1 PINT).
Feed pellets must be DRY not wetted.
No powder coating of meat (liquid is okay).
Catmeat only on hook (no more than 1 piece).
No riddled or liquidised baits.
Maximum bait allowance is 5 pints.
1 standard tin of corn or meat = 1 pint.
No floating pole.
No pole splashing.

All of the above are likley to be checked both before and during the match by fishery staff.

Right thats the rules out of the way now onto the venue it's self.

In Round 4 of the Series on Saturday 10th August we will be on MOORS POOL which has 21 pegs for matches and we have all the pegs.

The following pictures show the Pool.

Picture (1) is from the corner of peg 1 looking down the bank to peg 11 in the middle at the far end.
picture(1) 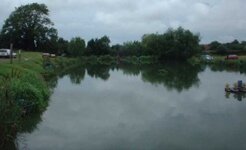 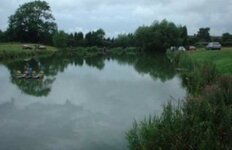 
As luck would have it i just happened to have my gear in the back so i sat down on peg 1 to see what was doing.
I fished from 2pm till 8pm with about 2 hours spent talking to other's fishing the pool.

Rig (1) was a small Loaded Tyson taking 1x10 shot tied direct to .17 line to fish meat in 2ft of water against the near side reeds connected to an 16 lacy.

Started off at 6mtr with a pot of pellets and a few grains of corn and flicked about a dozen pieces of meat in each margin.

First put in on a single piece of corn at 6mtr and the float sailed away but nothing was there and the same thing happened on the next 3 put in's.

Then after moving the dropper shot about 4inches from the hook the next bite was connected with which resulted in a Skimmer about 12oz which was followed by dozen more.

Then i tried the meat which resulted in 2 foul hooked and lost carp before the 3rd was landed which was a ghostie about 5lb.
(no picture though as it never stopped raining till gone 6 so the camera stayed in the car till then).

Tried shallow every so often as the carp were constantley up in the water but could only manage to foul hook them shallow and more often than not the hook pulled on the first run.

Kept switching between corn and pellet on the 6mtr line and would hit maybe 1 in 10 bites of which every other fish would be foul hooked and pull out.

Managed a handfull of carp on the meat from the margins late on but most came from the 6mtr swim.

So hopefully going by the way it fished yesterday we will all catch a few more than we have been catching (fingers crossed).

Great post mate a good reckie.... my god youve booked a venue where there are actualy some fish!!!


im looking forward to moorlands, sounds great but so many missed bites....what do u recon is the reason for that?

So would you recomend fishing on the deck and maybe potting in the feed rather than loose feeding?

Also a lot of skimmers but a nice size

quote:but so many missed bites....what do u recon is the reason for that?
Click to expand...

Firstly the amount of fish that are in the venue (it's the same on all pools) very high stocking levels to give good sport.

Secondly by feeding to much it pulls to many fish into your peg at the same time and alot of the missed bite's are liners.

To try to over come striking the liners i ended up with about an inch of bristle showing and counting to 5 once the bristle disapeared.
This did cut down on the amount of foul hooked fish but had no real effect regards missed bites.

quote:So would you recomend fishing on the deck and maybe potting in the feed rather than loose feeding?
Click to expand...

2 answers for this one Scott personally i'd go with fishing on the deck as although you still miss or foul hook a lot you actually land a bigger percentage of the fish that you hook.

I think the main mistake i made was to pot in to much feed at the start ( pot) as it put to many fish into to small an area at the same time.

quote:
Also a lot of skimmers but a nice size

Talking to others that were on the pool and to some of the open anglers that were fishing the other pools people have been doing 30lbplus of Roach and Skimmers and 50lbplus of Carp.

But be carefull if you intend to fish the maggot as acording to regulars the fish to maggot are normaly of a smaller stamp.

As a foot note all bait's are for sale from the on site tackle shop along with small items of tackle.
If anyone wants to order any bait in advance the number to ring is 01299 250427

Something i forgot to mention regards Moorlands.

After the open yesterday most anglers were moaning about how bad it had fished and people were tipping back 50lb nets without weighing.
It was won with 92lb and 89lb was 4th.

Regards the amount of fish lost the angler who was 4th with 89lb lost 30plus Carp and said that was about 10 more than normal.

Steve as you know i don't keep secrets and there's nothing posted that i had not already told you on the phone.

You should know by now that i've never kept things to myself and don't like the secret element that runs along side most match anglers.

As you know with me my idea of fishing is to be open and honest and to help others as best i can even if those i help then proceed to beat me (which is normal).

Foot-note
For anyone that don't know Steve and me.
We are traveling partners (and good friends) and have been for about 5 years and he has never liked me telling others what i or we find out about a venue and is always moaning at me for it.

But it never stop's me spilling the beans.

He said that they are not allowed as they are not real size 14 (as we all know) and only standard size 14 hooks are allowed.

Hope the above clears up any confusion.

Are you saying you can only use a size 14 or can you use smaller hooks 14 being the largest hook size allowed.I do not want to be tying rigs to a size 20 and finding they are no good.

Golfs a game for people who can't catch fish
M

Keith and i thought it would stop confusion.


Largest hook size allowed is 14 but you can go as small as you like.

It's just the over sized Mustard Hooks that are not allowed.

Seeing Scott got Man of the Match at Clattercote i will be trying out his method of a squatt on a 22 for the skimmers.After all what happens if the carp don't feed.I am surprised you have not thought of a back up plan.When you consider the fish have been told Malc might walk on the them it could put them off ha ha ha.

Golfs a game for people who can't catch fish
K

skimmers what are they then
C

Skimmers are slimy silver fish that will hopefully eat your catmeat!!Leaving the carp to eat the proper baits!!!

Have Corn will Travel Part 9