This was really my start, the first day in a long line of many i hope to take this year. Off to a little commercial water half an hour from home, with pellets, corn, maggots (dead) and a lot of hope. It was cold but I set up in the full sunshine. On plumbing up I found 4' dropping off to around 5'--6' foot around 6 meters out. I cupped in a small amount of 2 m soaked pellets and some corn, enough put not too much.
The fact I bumped the first amount at my feet in shallow water showed me just how much bait it really was. So I switched to half amount (its amazing the spread of two mms and corn in even shallow water.) Set up the Acolyte Pole with a 4x12 strung out shot (5X10) and pulled the float up the little shelf so it just cocked, showing me the tinniest amount of red tip. I fished a 4 ml expander then corn, as soon as I changed to corn, the tip buried and a nice little 6lb mirror pulled the elastic nicely out. About and hour later I changed to a soft pellets again, and had another little mirror about 5lb, but this time in 3/4 foot of water but in the margins beside me. It was getting warm so I thought they must be on the move now? I dropped a nice little amount of groundbait and soft pellets and sat back to enjoy the sun and a nice coffee and chocolate cake, the daughter had made for me.
The water in this little commercial is coloured naturally with all the rain, but I'm convinced the water had coloured up a little more, where the groundbait had been put in. I replaced the float after pulling it down a little, and then pulled it into the bank to settle. I could see the number 10s set one by one then stop, I'd made the tip black with a maker pen now, as the sun was really warm and bright. It shot away with the confirming bow wave that often happens in shallow water. Sadly the fish bent the hook out of shape, and was gone. Operator error, in trying to fish too light, it was a B911 standard on a 6lb bottom, normally it would be a Guru QM1.
The bailiff informed me I was the only one to catch any proper carp, even the guys with a two rod set up and singing alarms had blanked.
Cracking day, I was happy with just two fish. My depression lifted and all was right with the world. On packing up I'm sure a little frost was starting to settle, and I had the heater on full blast all the way home.

Nice session there mate. It’s always good to catch more than those around you, especially when you out-carp the carpers. The classic ‘one that got away’ will keep you going back for more

It will buddy.
To be honest the proper carp anglers tend not to fish these type of places. (no disrespect to anyone meant) But I find it odd to find two guys fishing two rods each with buzzers on such a small water, maybe half and acre. I understand the sitting back and enjoying the surroundings, and the buzzers telling you about a bite. But it's the fact everyone and the world knows about it every time the wind blows, or they recast, it's just takes that sitting back and enjoying the surroundings away from others that like some peace.?

Just as a after thought. When I first started fishing Hallcroft, it was with an Avon rod and 6lb line, flat float in the margins, sitting back and watching the tip go round. 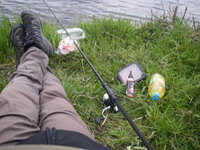 Portland buddy, but its still slow at the moment. I'm going a bit further on Monday?

An end of term report card would read “could do better”