Well today I had what was supposed to be my last Thames Roach session of the summer before the equinox bring us into autumn in the week. However weather wise it seems autumn has come a bit early as since Thursday the peak day time temperatures have dropped below the 20 mark for the first time since at least early June possibly even early May and today it went a step further as the weekend came as the night temperatures dropped well down into single figures. Wasn’t too worried about how that would effect the fishing as even if it would be a chilly start it would get into the upper teens and whilst the river had got a bit low and slow again after being in good nick the last couple weekends it still had a bit of colour. Obviously the cold meant the wind was from the north ie the bad downstream direction for most my stretches so I returned to Franklin’s meadow where I had a decent session the first time I fished it last month as northerlies are upstream there. However after an flat calm first hour the wind got a lot stronger than forecast. It was not strong enough to be a bother had the river been flowing properly but as it wasn’t flowing much at all it actually sent the float upstream at times! So that combined with be being a bit restricted by being a float rod down as my new butt section required after Sundays mishap hadn’t turned up yet meant that I got myself in a bit of a mude tactically to the point I often had to abandon my usual roach approach and just fish for bites. So ended up a pretty tough session certainly the hardest since the roach season began at the start of July. Was weird being cold again for the first time in 3 or 4 months as well!

Picked the swim just before the one I fished last time as looked a bit deeper than the previous swim (which it was) and started fishing just after 8.30 on waggler and maggot and thanks probably to the cold night managed a couple dace and a perch before the bleak woke up so I then switched to hemp. That started off ok with a half decent pace nice roach and dace but by about 10 then wind was picking up a lot making feeding and casting accuracy, presentation, striking bites and even seeing the float a challenge so the catch rate fell through the floor. The cold probably didn’t help as it meant the bites took a while to come giving more time for the wind to mess up the line but it wouldn’t have been an issue if it wasn’t so windy or even if the river had been flowing more. If I’d had my other float rod with me I’d have messed around with fishing different lines and depths and no doubt the kept the fishing coming but as I didn’t have that option I decided to take advantage of there being a bit of depth and flow close in and fish whip and maggot when it was gusting for whatever came along, fish the hemp and waggler for roach whenever it dropped a bit then even chuck a feeder when it was really blowing big time. In hindsight I should have just battled on with the hemp on waggler as feeder was rubbish and it still a bit too bleaky to really put sustained runs of proper fish together on the whip so ended up being the toughest session I’d had since the rubbish part of the season in June.

Packed up a little after 3.30 with only three dozen roach plus at least a dozen dace, probably a couple dozen bleak, half a dozen perch and a single gudgeon so way short of the roach tally’s I’ve been getting since the start of July even if similar on numbers of other fish. As I say in hindsight I should have persisted with the hemp as whilst by fishing with one rod in such conditions I’d probably never have got the 60 odd to 90 odd roach I’ve been getting on the other similar length sessions this season I’d probably have caught half as many again as I did catch which would have made it a bit more respectable result so regret not doing that instead of messing about so much. Genuinely reckon I could have near doubled what I had if I’d had a second float rod as could have put another line in between the waggler line I did fish and the whip line plus could have played around with different presentations across the two rods but can’t fish with a rod that’s currently indisposed! Still I’ve had worse sessions and it’s a lovely spot a quite pleasant out after a cold start so not a bad day really. On the upside the stamp of fish wasn’t bad so I’d still have got into double figures weight wise probably by about a pound so at least it kept that run going of almost certainly doing so every time out on full length sessions this season.

Tackle wise with the 13ft drennan acolyte ultra float rod out of action (did think I’d have had the new butt for this session but it’s still not been delivered to the shop apparently) so the only float rod for the day and probably just about the most the most successful outfit of the day was the 14ft drennan acolyte ultra paired with a 2500 shimano sahara RD reel loaded with 3lb maxima. This was to a 2g drennan loaded crystal insert waggler with the usual strung out shot to a size 18 to 2lb drennan silverfish hook to nylon set up to just off bottom in about 5ft of water. Next most successful was the 4.5m drennan acolyte tele whip with a pre tried SF river rig which if I recall was a 0.8g SF3 float on 2.5lb mainline with a bulk and 3 droppers to a 1.7lb hooklength with a size 20 hook of some descriptive. This was set up slightly over depth for stability in about 4ft of water. Feeder set up only caught a handful of fish but was the 11ft drennan acolyte ultra feeder rod paired with a 4000 cadence CS7 FD reel loaded with 5lb hyper sensor to a 20g kamasan black cap feeder to a size 14 to 4lb drennan wide gap hook to nylon. Hookbait wise most fish on waggler were on hemp save for a half a dozen or so on single red maggot then everything on whip was single red maggot (tried hemp but didn’t work that close) and feeder either double red maggot or corn. Groundbait for both balling in (initial few balls then a top up in the waggler line then regular nuggets on the whip line) and the feeder was a pretty even mix of dynamite frenzied hemp match black and roach super black stuffed with hemp and maggots.

My grandad was with me as usual and fished the feeder alternating between maggot, corn and pellet on the hook. As has been the case with all his summer feeder fishing it wasn’t great but he did better on the feeder than I did with probably 40 odd fish made up of a mix of roach, dace, perch, chublet, bleak and skimmers for probably about 7lb.

All in all not the best session but not the worst either so all in all I suppose an ok session. Bit of a shame to end the summer on the river on a bit of a low bit but aside from a typical difficult start in June it’s been a really good summer for Thames Roach since july started. Well certainly numbers wise even if the stamps been down a bit on a normal year. Before todays struggle I had across 11 full length (7 hour ish) sessions without doing the exact maths averaged about 70 roach a session contributing I’d say anywhere from about 12lb to 15lb to overall bags of I’d say about 13lb to 18lb. Shame to have not got a session where I’d have been sure I’d have had 20lb but the stamp just hasn’t been there for it this season for someone of my limited ability to catch enough to do that sort of weight but it’s still consistently produced good bags. Then so far as shorter sessions go I had 3 rubbish ones in June but the 3 since then have had a similar catch rate to the full length ones so been a good Thames roach summer all round. Have had some nice dace and silver bream amongst them as well and nice to get my first few Thames perch of the season today as well. That I hadn’t caught any perch before today is almost a marker of how good a roach season it’s been as just haven’t had to deviate from the plan A seed approach often at all.

Next session now will hopefully be Monday. It would obviously be a river session in an ideal world but as we’ve got a day off for if I do feel a bit obliged to watch the morning part of the queens proceedings as that seems to be the main bit. So after that duty I’ll probably just pop down the canal for a few hours in the afternoon as it involves a much shorter drive and walk than the river and involves setting up less tackle so is more suited to a short afternoon session. Not been on the canal since late March if I recall nor have many others people as far as I can tell from the lack of reports so not a clue how it’s fishing. But hoping it’ll be quiet boat wise so far as summer goes given both the weather is no longer very summery and no doubt some people will watch the full 7 hours or thereabouts of the queens proceedings. Is a half chance I may nip down the river tomorrow but got a few things on so not likely. That’ll mean my next river session will be back end of October due to a couple busy weekends then a holiday which is a weird thought as aside from during winter floods I’ve not had a break from the river that long during a season for a good few years now. Could be quite different fishing by then will depend what the weathers done and doing at that time I guess!

Pic of the swim when it was idyllic at the start and later to show how much the wind got up plus a couple roach, a dace and a perch. 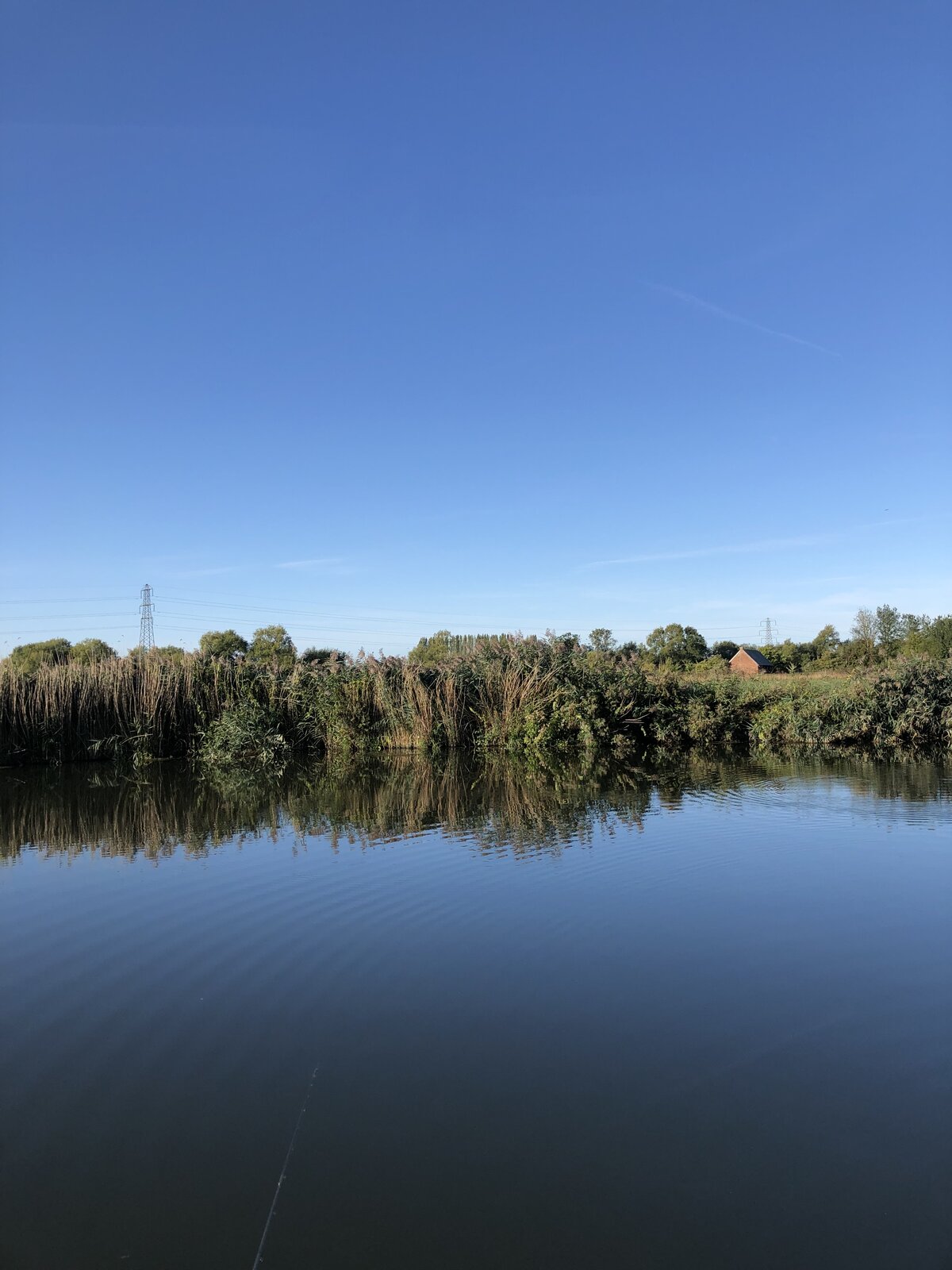 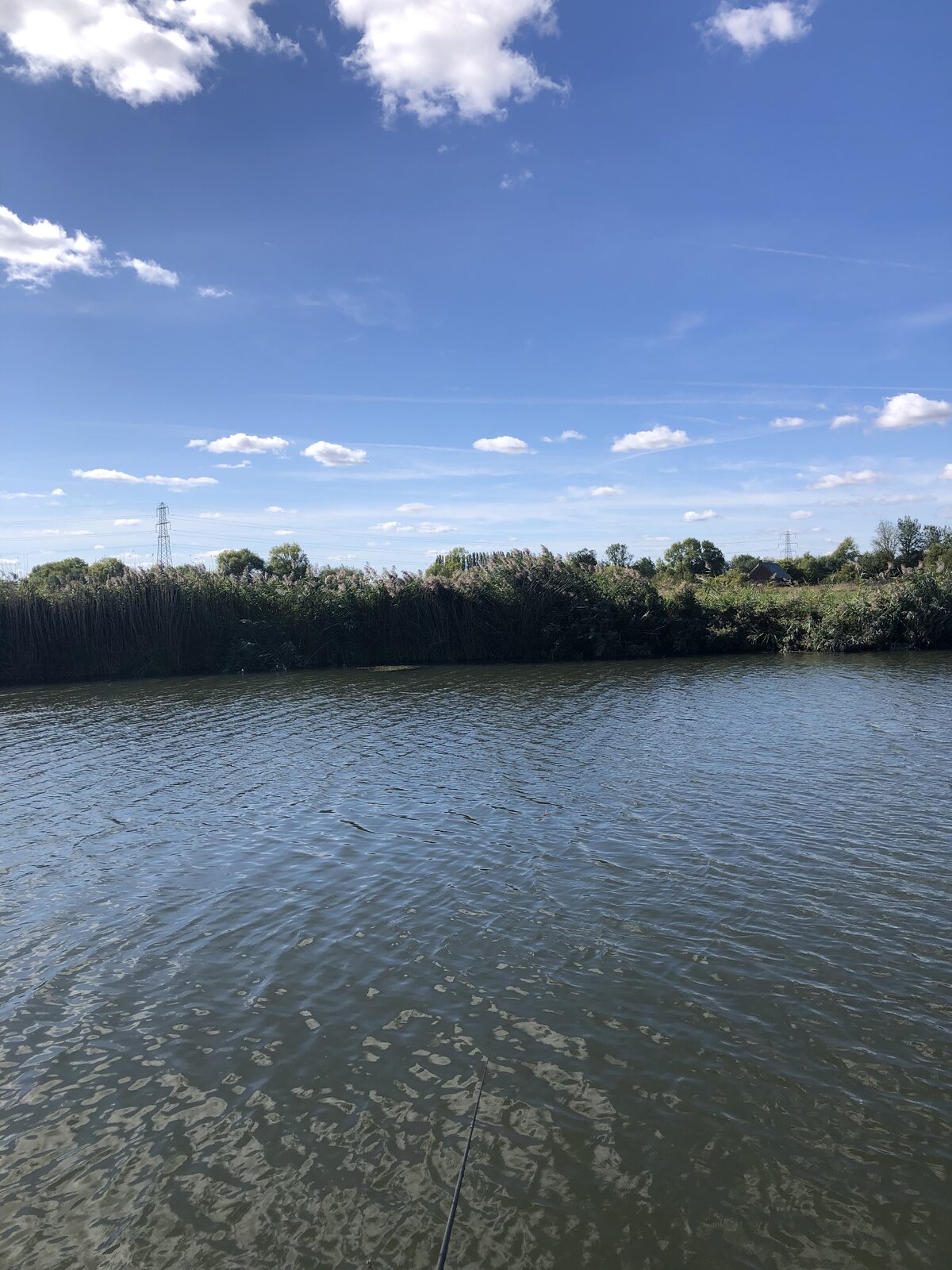 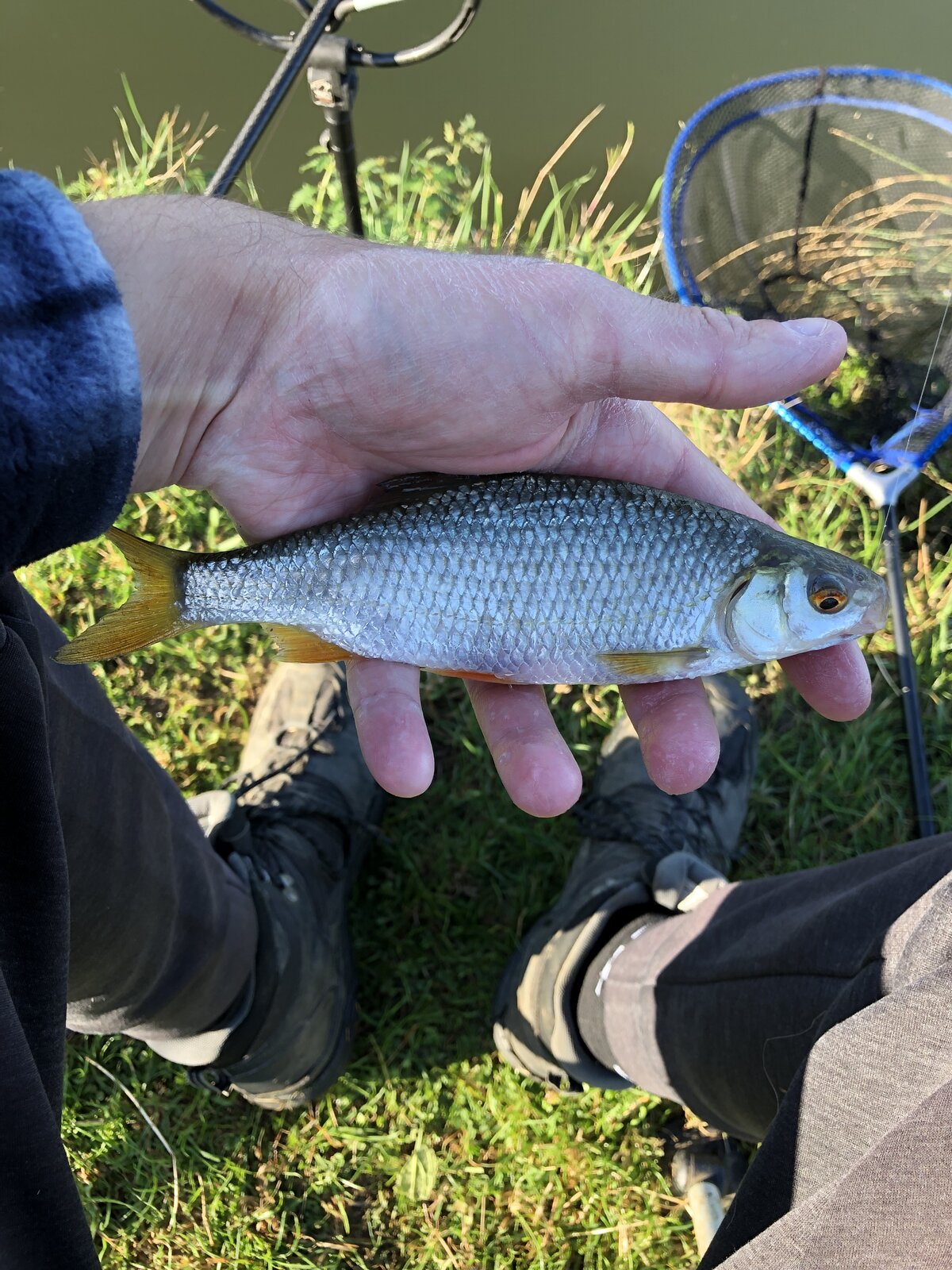 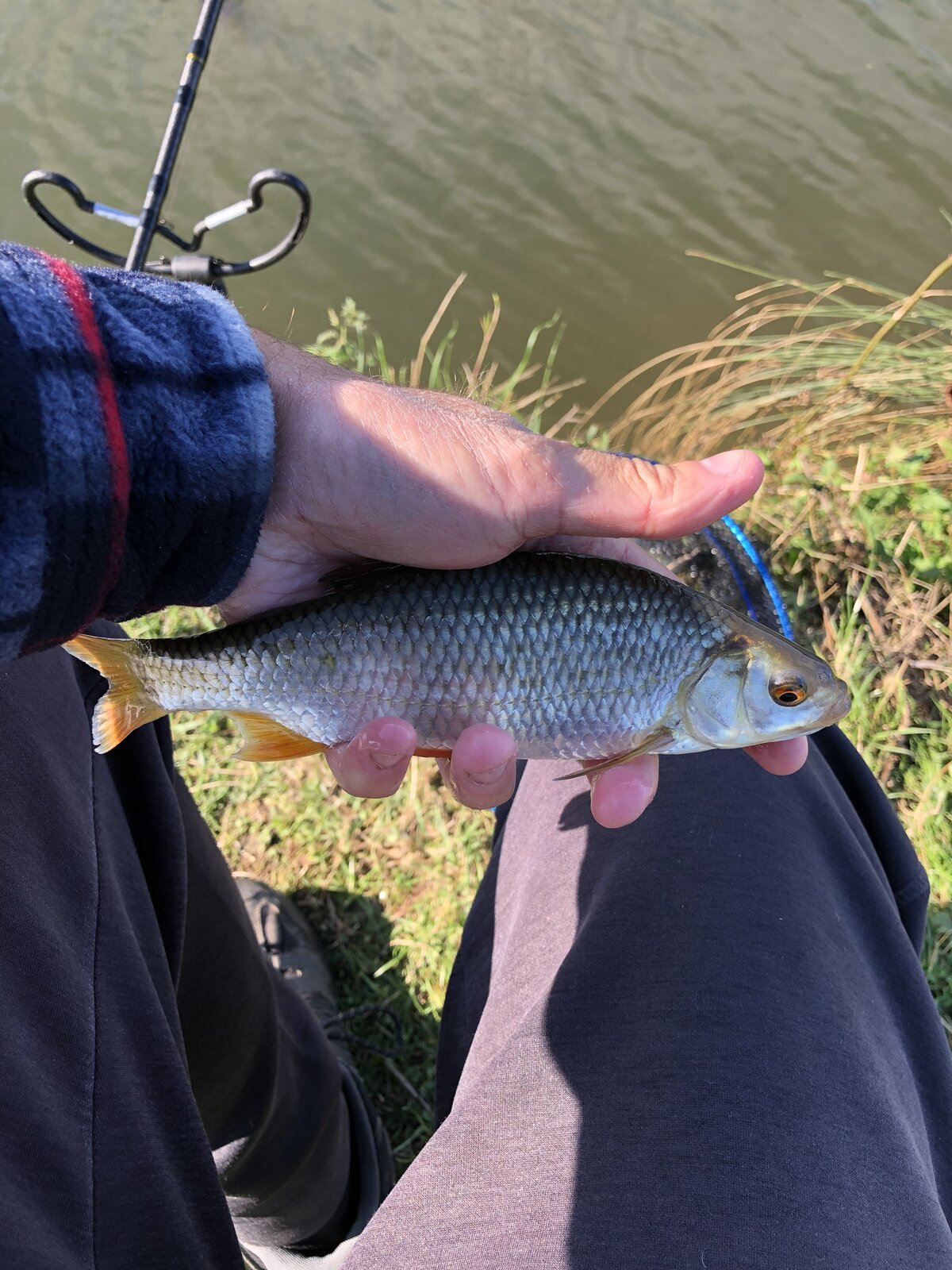 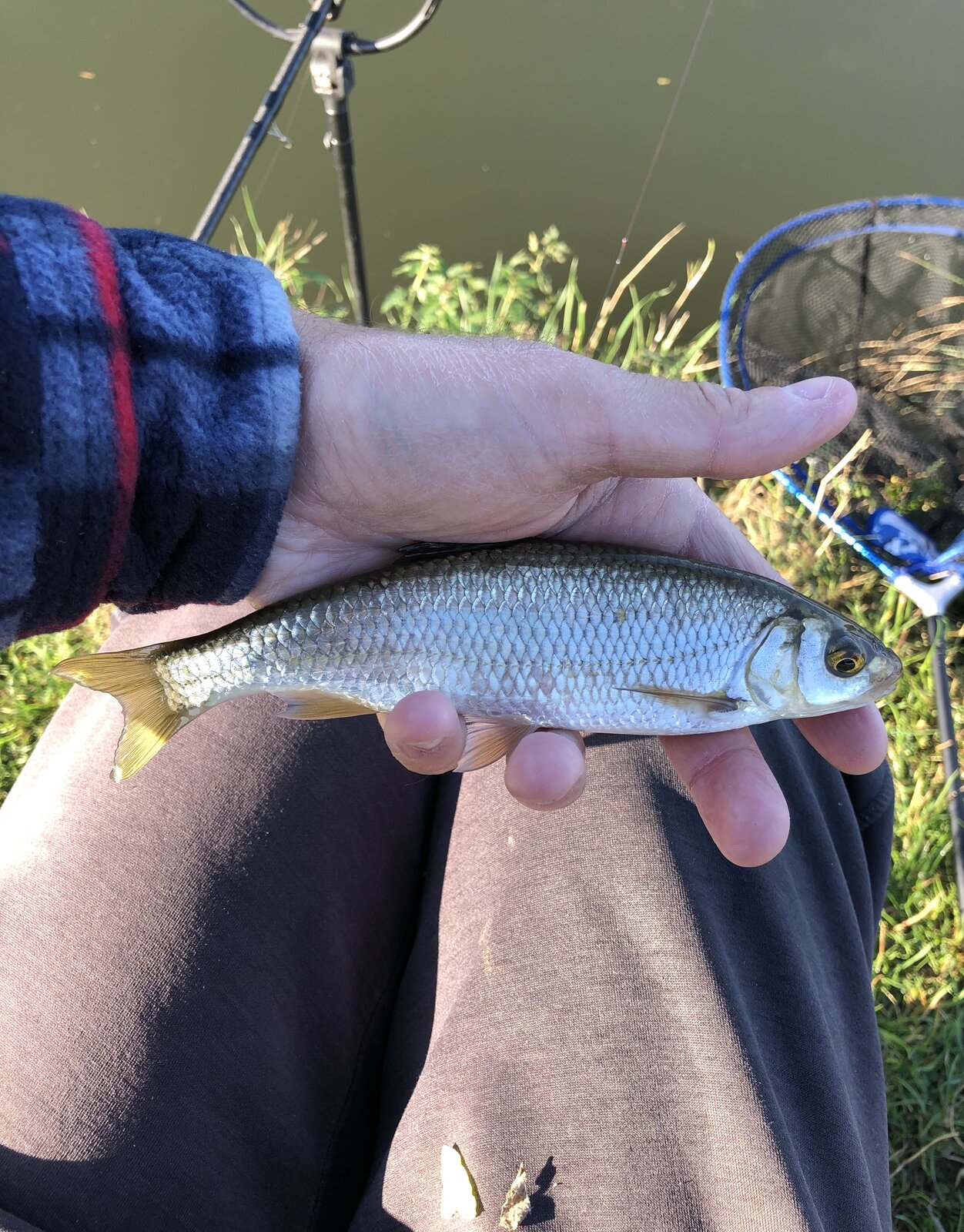 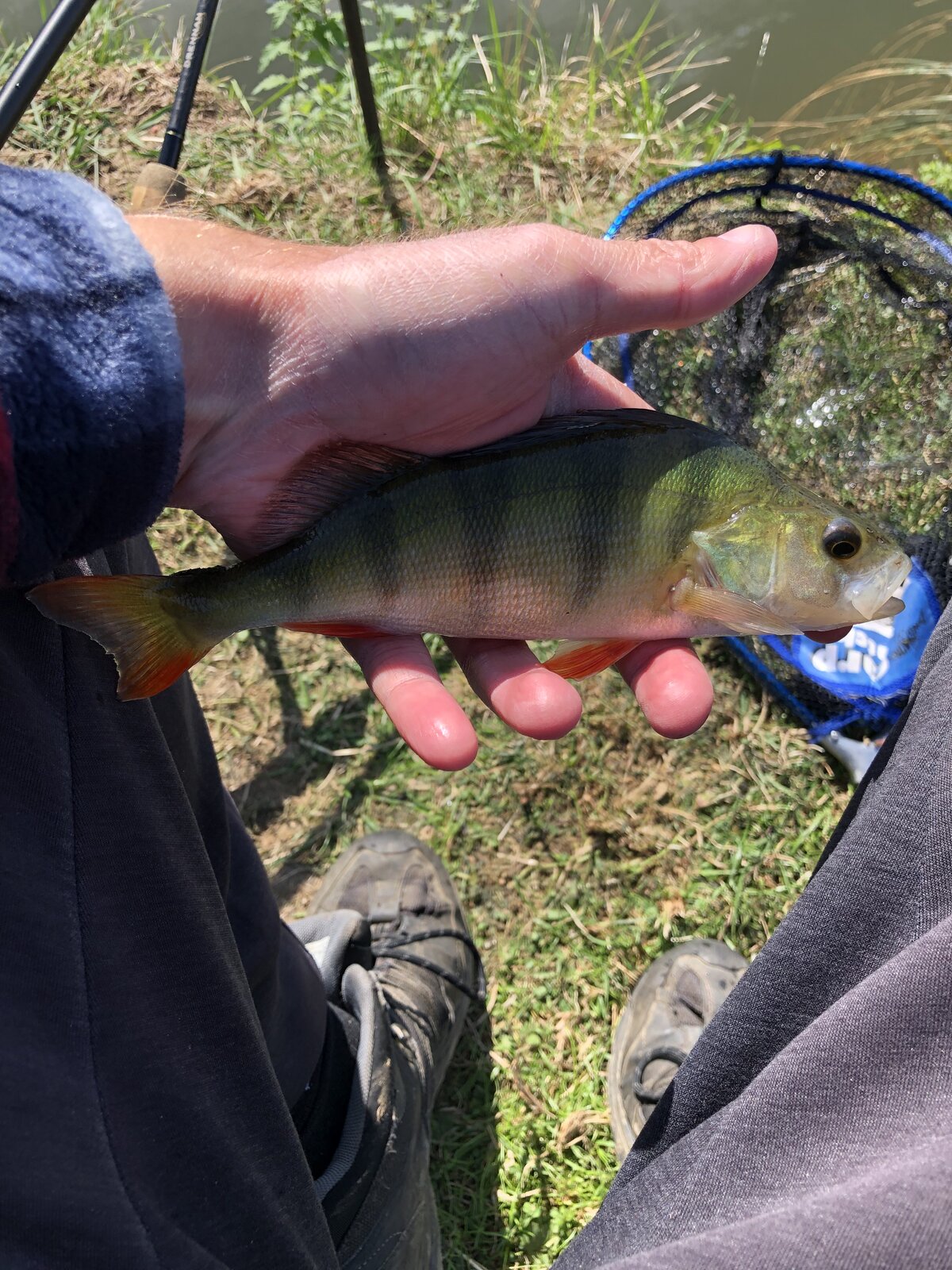