I’ve had this a few months now and thought I’d write a review. I’ve had plenty of boxes over the years but I cannot believe I need to spend over £400 on a box! I saw a guy recently on a fully kitted out new Octbox (not having a go at Octbox) which probably cost £700+ fishing and struggling to control a £300 pole, think that equation is the wrong way round in terms of fish caught at the end of the day.

My box before the H30 was a Matrix F25. That was a great box similar to the H30 in design and nice and compact which suited my vehicle. The F25 served me well but I always felt everything was a bit close at hand and it could be more stable if it was wider. When I changed vehicle a wider box was possible and I started looking around. Weight is an issue so the H frame style boxes were always likely to be my purchase. I looked at the Prestons Inception and while I thought it was a very good box the deep tray which could not be moved put me off.

I bought the H30 for under £300 from my excellent small shop (Lobbys tackle in Stonehouse). He’d had it on the shelf a while (they came out in 2018) and there was some dust on it, bought the standard box with a deep and shallow drawer. I had intended to use the shallow drawer for winders but the fixed dividers ruled that out so I bought an additional winder tray (and fitted with Boxtrays winder holders). I do now like having a shallow tray for bits and bobs. I have also bought another deep drawer (I was going to get a deep tray but getting a drawer is better). I bought a £3 circular spirit level off eBay and stuck it on the frame at the back in the middle, this has worked brilliantly. Now a real benefit of the extra trays means that the Preston Inception shuttle brackets (with a tiny modification) perfectly hold the box on my shuttle.

My only other modification is that I had 2x25mm leg extenders for the matrix. I have put these on the left hand side and my Matrix extending tray attaches front and back to these (on a Preston tray support arm). I like my tray high up, I’m 6ft tall but find most boxes as sold mean the tray is too low (even seen this with top anglers). The other benefit is my tray now has 3 anchoring points available on the outside of the tray and I tend to put my Matrix bait brolly in the middle one (using the 22mm insert that comes with the brolly arm). I hope the photo makes this clearer although the bait brolly isn’t in the photo.

good points about the box:
- it’s very stable and I notice how the larger footprint helps over the F25
- its got 30mm legs, so no need to buy new brackets. I think for the vast majority of anglers 36mm legs are unnecessary.
- the leg extension knobs are very secure and easy to apply, no slipping to date
- the main frame knobs are great and can be used in 180 degrees of position to manage space
- the seat is firm, jurys out on it but so far I’ve not noticed a numb bum
- being that bit bigger than the f25 I leave some brackets attached during transportation rather than carrying separately
- the footplate is a good size, there are 2sprung holders but I don’t really use them, just slide in and out
- the clips on the trays are as good as I’ve used, positive and secure.
- it comes with a cover which I’ll never use.
- I think it looks good!

areas for improvement
- could have had spirit level fitted (wasn’t difficult to sort)
- a shallow side drawer without fixed dividers would be good.

Is it light as it’s name suggests? No non angler would pick it up and say it’s light! It’s heavier than the F25, but you’d expect that being bigger. I realise I haven’t helped myself with extra drawers although the second deep drawer only has hook boxes and my glasses in. I don’t know what it weighs, the strap is excellent however I hardly use it, just lifting off the shuttle at the peg. Assume the Z30 and Z36 type boxes are heavier, definitely not for me. I don’t think any modern style box is light especially when we fill it except perhaps Matchbox (which doesn’t have a sliding footplate).

As you can probably tell I’m very happy with it 9/10 from me. I’ve tried to attach some photos after I’d washed it down, one photo does look like there is some scratching on the footplate which there isn’t, it’s just the light and water.

The H30 is a great box and I have been very happy with mine for past 2 years. I love the fact you can clip different units on/off or change the base unit. I have picked up several different drawers so I have a "general" shallow drawer which I take every time, so a quick few hours after work is covered, a commercial deep drawer (method / pellet wagglers etc), a shallow one for rivers one and a pair of winder trays (which can accommodate 2x Preston winder trays each)

Just means I don't carry everything to every peg - brilliant!
S

Bought mine earlier this year for absolute bargain, a fella bought it on a Tuesday and sold it to me the next Saturday for £150. Have since bought a new seat from just perfect seats, really comfy. I bought the winder tray and 19cm winders. Also bought 6 x 620mm legs which has helped having my side tray at a perfect height. Needed these due to the depth of the new seat and winder tray. I previously had the S36 but it was far to heavy. MAP 30 Lite suits my needs perfectly
S

Here’s a photo of the new seat 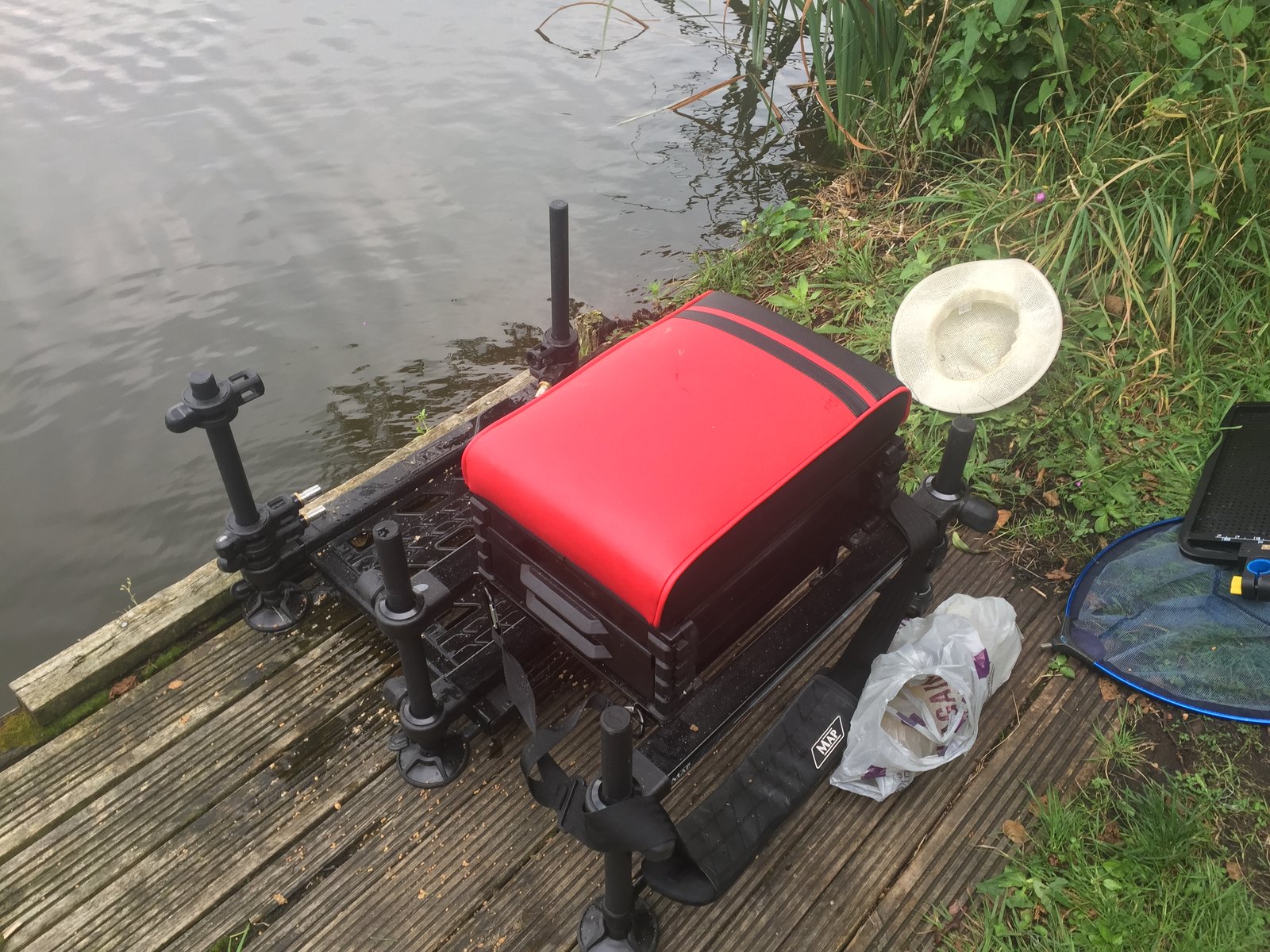 I've got the big brother of the lite the H30 Comp
Identical other than it has a large base unit which holds a couple of float tubes, a selection of kinder size pots, a box of pole rigs > top3, bait droppers and spare scales.
Love the box but the seat is a little too firm for my tastes - how much did that natty red number cost - and do they do 'em in any other colours?

Hi Simon(s)
Great reviews and I am overall happy with my H30 Comp. One niggle I have is that once the footplate is pushed back in to travel, it tends to hang down at an angle under the box. Do you have the same issue?
S

Not noticed that on my MAP 30 lite

If it hangs down at all it isn't any lower than the feet, otherwise I'd notice when loading the car - I'll have to have a look.

great review. Any chance you can send me a picture of the preston shuttle adapter after you modified thanks

First of all you need to know that my h30 box has 2 deep drawers, 1 shallow and a winder tray. This is part of the reason it sits so well on the inception arms. I also had to shave a bit out of the gap in the inception arms. It’s about 20cm from the bottom of the arms to the frame sat in the arm. Hopefully the photos show everything.

I like how you have the top kit roost setup on the HL30. Is that a roost kit or separate arm / roost that you have put together ?

It’s an old arm I had with the matrix roost attached using a short bank stick. The other end hangs free, I don’t put a leg in it and have filled the roost without problem. It keeps the kits and rods out of the way but I can still reach them from my seat. I have a browning free standing black magic s line roost to use in conjunction to keep things safe and off the ground plus secure even in strong winds.

I don't see the benefit of buying a "lite" box and putting a large number of drawers....
If lite is what you want, take out the drawers...

Take your point, but it’s still going to be lighter with extra drawers than one with a fixed frame.
L

Thanks Paul for your help

Wife has bought me another shallow tray and winders for Christmas.So I’ll have 2 winder trays, both with the blue 19cm 28 winders in each tray. With the 6 x 620 legs Just perfect seat and shallow and deep draw,plus the MAP QRS and Nu fish side tray, Preston kit safe, Matrix brolly arm Matrix Bump bar and MAP feeder arm, I’ve got everything I want when I’m out fishing.
Finally the MAP X4 trolley to transport it with my holdalls and rollers plus Drennan stink bag.
Flipping heck I’m a tackle tart

How well does it sit on a map trolley