The Environment Agency has apprehended a man in Sunderland and seized an illegal net following a report of illegal fishing. 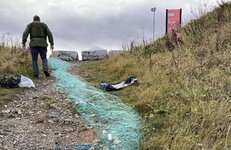 The illegal fishing net seized by the Environment Agency

On Wednesday 7 October Fisheries Enforcement Officers responded to a report of an illegal gill net set on the beach at Ryhope, Sunderland.
The net measured 25 metres long by 2 metres deep, and was seized along with dead fish. The man, aged in his 40s, was stopped and questioned as he left the beach. He has been released while the investigation continues.
Officers have been carrying out active patrols on land and water – including joint boat patrols with Northumbria Police - in Sunderland as part of an investigation into the use of illegal nets.
Unlicensed nets such as the one seized are capable of taking significant numbers of fish and can have a damaging impact on future fish stocks.
In July, two large illegal fishing nets were recovered from the River Wear in Sunderland, and another in Washington.

The North Sea coast is an important feeding ground and migratory route for both salmon and sea trout and the Wear is a key river for them. The use of illegal nets have a serious impact on these fish returning to rivers to spawn.

Unattended and unlicensed gill nets are not only capable of killing significant number of fish indiscriminately, they will also kill any other wildlife that are unfortunate enough to get entangled in them.

This incident again highlights how vital it is for people to provide information to us and demonstrates that we will take action. We are using intelligence to actively patrol our rivers and coasts and responding to reports of illegal fishing.
Click to expand...

Fisheries is very carefully managed to protect the future of the industry and ensure fish can get to their breeding grounds to spawn.
Those who operate unlicensed nets risk prosecution, with unlimited fines and possible prison sentences available to the courts, and Environment Agency officers can seize equipment and vehicles.

Information about illegal fishing can be reported to the Environment Agency’s 24-hour incident hotline on 0800 80 70 60.
Environment Agency officers out on patrol are wearing the appropriate protective equipment and adhering to social distancing measures.