Last Sunday was the 3rd round of my club winter league, staged at Lawn farm as the original River Cam venue was deemed to be unsuitable due to the weather (or something else, having never fished a river before I had decided to sit this one out, however when it was moved to Lawn Farm I decided to fish it as I’d had a decent result of 3rd place on the same lake in round 1 a couple of weeks ago) 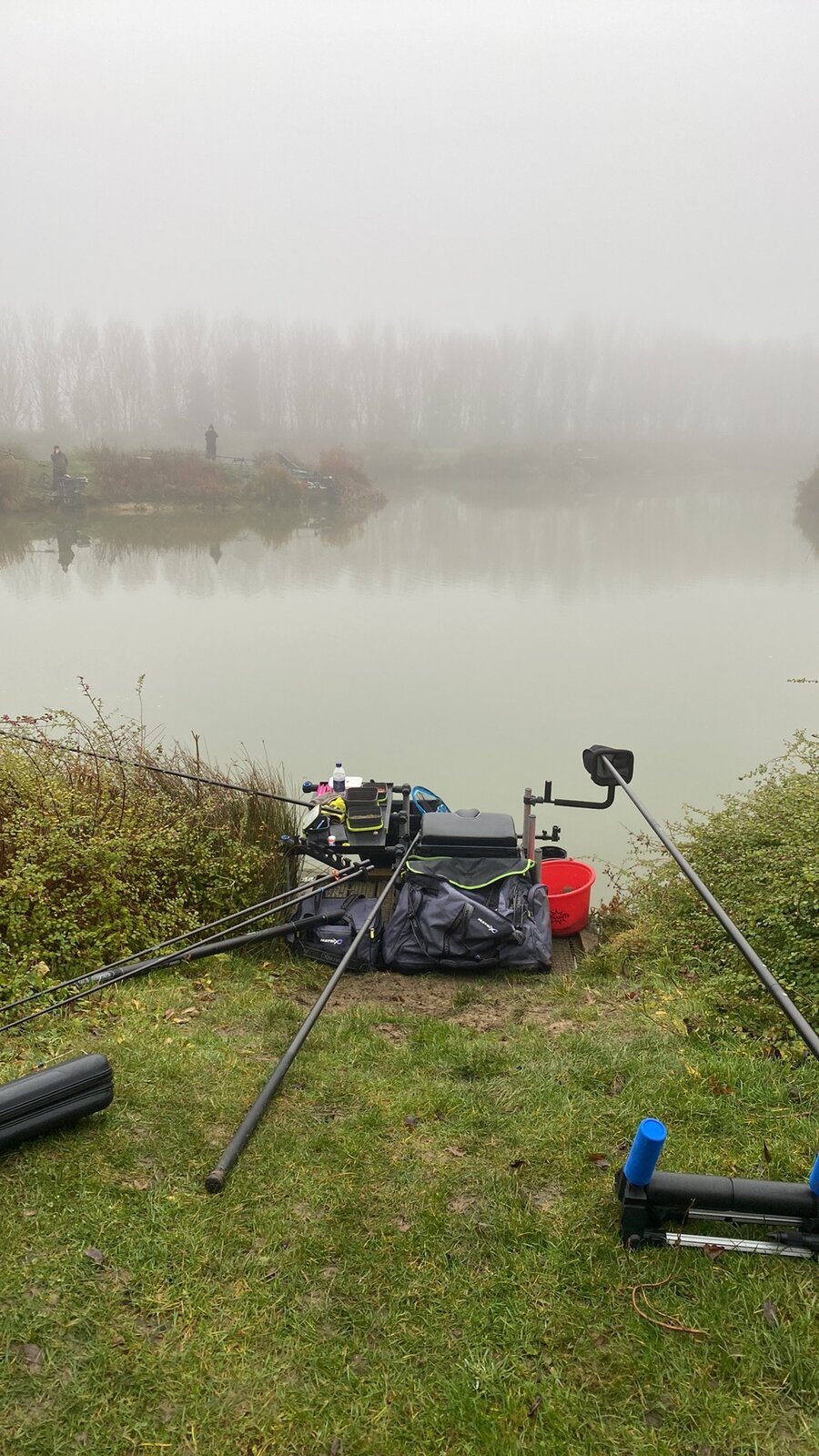 Slightly, but not markedly, less muddy than Alders Farm (MD Fur and Feather the day before) which bore a striking resemblance to the clips I’ve seen of the Somme, I took my time setting up, particularly with my Groundbait, which was a mix of Sonubaits F1 dark and Sonubaits Sweet Skimmer, with some casters mixed in. The plan was to fish caster on the hook, with maggot and expander as a change bait if required. It’s a mix that worked for me on this lake last time I fished it, with 14lb of skimmers and roach for 3rd place.

At the all in I fed the two long lines with 2 balls of Groundbait and caster, thankfully for the first match in about a month there was no wind, the lake was like a millpond.

Also a first for me, when I laid the rig in it was shotted perfectly, just a pimple showing. Not that I had long to admire my handy work, as within 15 seconds it plunged under and the Orange Slik was streaming out as a 1lb skimmer was snared.

At this point I realised that the 8-9ft depth I was fishing at would need a slightly different netting approach to the normal 4-6ft ponds I fish. With a fully extended 3.6m landing net handle coupled with a top 3 and a rigorous stretching regime, I established a workable process, and the first hour saw a series of skimmers, roach and a small Chubb go in the keepnet.

I spent the next couple of hours switching between the long lines, catching decent sized skimmers regularly, whilst the angler on my left was catching tiny roach and perch, and the guy to my right had hooked nothing but carp which didn’t count.

With an hour to go, I was feeling confident as the fish were still coming, of the anglers I could see I knew I was comfortably ahead of them all other than the bloke on peg 27, which is the renowned lake flyer peg. He also happened to be the match secretary and comfortably the best angler in the club, having won the winter league for the last 3 years and the first 2 matches this year.

Anyway, I kept switching the lines and feeding balls of Groundbait/caster, and the fish kept coming, including a monster skimmer/bream which I lost at the net and wasted 15 minutes untangling my rig ( since learned that 0.13 line for mainline is probably a little light and prone to tangles).

Back out and tried fishing a yard past the 13m lines, which snared me a few more fish in the last hour, and before I knew it the whistle was blown and the match was over.

I knew I had had a good day, but when the superstar on the flyer asked me if I had more than 20lb I started to think I might be in with a shout of a frame. I’m terrible at estimating weights, especially small fish, so my guesstimate of 18-20lb would definitely put me somewhere close.

I would be last but 3 to weigh in so had plenty of time to pack my gear away, get it in the car, and get back to my peg in time to weigh in. As I walked back the weigh in was at the next peg, so by the time it got to me I knew that the flyer had 20lb 13oz, with 18lb 2oz in second place.

When I lifted my net from the water there was a few whistles and comments from the attending crowd, along the lines of ‘ooh this could be close’, and so it turned out. The scales ( weighed twice to be certain) registered at 20lb 11oz, just 2oz behind the leader.

And so it finished, the remaining anglers didn’t trouble the frame, so I ended up 2nd, and 3oz short of a first match win. 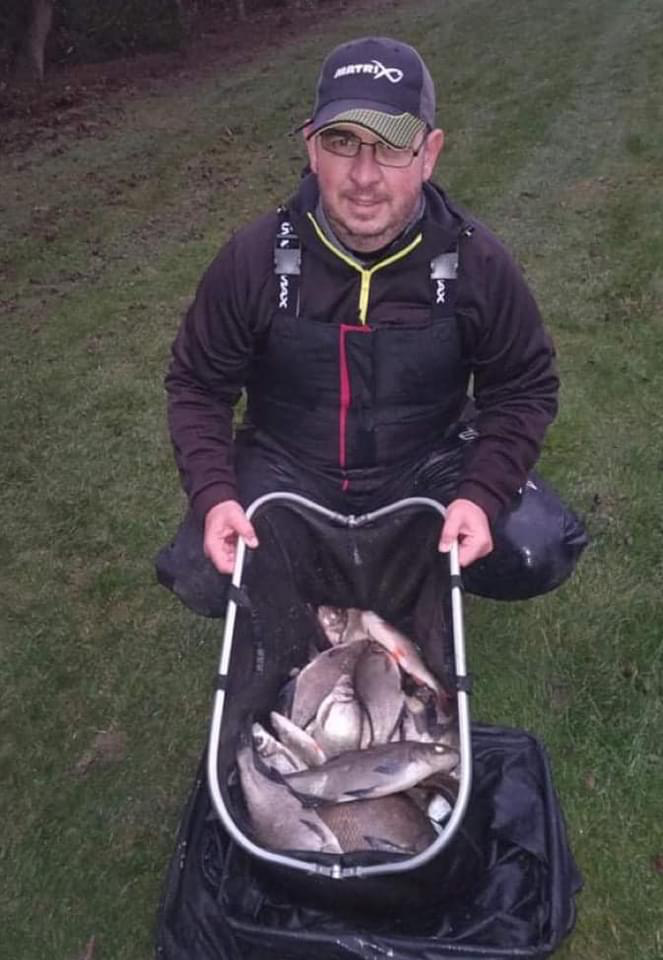 On a positive note I’m sitting 3rd in the winter league with a 2nd , a 3rd and an 8th (which will hopefully be one of my two droppers), and looking forward to the next round on January 9th

Top angling that Stewie.
Great result. Won't be long by the sounds of things before you're the man everyone will want to beat.

Lol, I knew it wouldn’t take you long to pick up on that! Do you have a keyword search facility that sends you a ping every time the terms ‘Stewie’ and ‘tangle’ come up in a post??

Suffice to say I took the advice of ‘going lighter in winter’ a tad too literally. Rigs now all retied on 0.15 line (hangs head in shame). As you allude to, every day is a school day……

Stewie74 said:
Lol, I knew it wouldn’t take you long to pick up on that! Do you have a keyword search facility that sends you a ping every time the terms ‘Stewie’ and ‘tangle’ come up in a post??.......
Click to expand...

Easy Tiger, just pulling your leg, you know I enjoy your consistent but friendly ribbing. And to be fair it’s fully justified whilst I continue to make novice cock-ups

Happy Christmas to you and yours

Really well done Stewie, so close as well mate , really unlucky not to get your first win ..good luck for the rest of the series, and have a great Christmas mate, Gazza

chefster said:
Really well done Stewie, so close as well mate , really unlucky not to get your first win ..good luck for the rest of the series, and have a great Christmas mate, Gazza
Click to expand...

You too Gaz, happy Christmas to you and yours

The cynic in me can't help but wonder whether the 2nd weighing wasn't to allow a bit more water to drain making you weight that bit lighter.

The cynic in me can't help but wonder whether the 2nd weighing wasn't to allow a bit more water to drain making you weight that bit lighter.
Click to expand...

To be fair Pete the two weighs were both the same, so no issues with the result. Just frustrating to come so close and only get beaten by a very good angler drawn on the lake flyer

That individual match win is just around the corner!
Y

That individual match win is just around the corner!
Click to expand...

It’s coming mate, probably won’t be a match where you’re fishing though #legend