So with the weekend here I was back out after the Thames roach today and chose medley as the venue having not fished it in couple months. Weather wise conditions were good being very calm, mild and mostly cloudy but I found the river as low as I’ve ever seen it this time of year and probably as low as I’ve seen it full stop in a good 4-5 years. It had so little flow that with the slightest upstream zephyr it didn’t even move was like a Stillwater! Going off my pictures from my last session there in august it was down a good 6 inches compared to then and looking at those from the same time last year it was down probably 18 inches! Mad how much it’s dropped in a week as it was in pretty good nick at sandford this time last week but had dropped about 3 inches there on Thursday and must have gone more since to be so low today. As such I was expecting it to be tough and it certainly was at times but it worked out in the end.

Had a bit of a late start just before 9 as sheltered in the car rain early doors. Started on stick and maggot and it started ok with a reasonable number of small dace, gudgeon and the odd small roach in the first hour. By 10 it was getting a bit bleaky so when I had a reasonable perch I thought that might be the sign of the better fishing awakening so I went onto hemp and waggler. After a dace virtually straight away that produced nothing which was really weird as I’ve usually got hemp working well within half an hour over the last couple years let alone within an hour. To make things worse the dace and gudgeon switched off as well so the next few hours were mostly tiny bleak and chublet on maggot with hemp just not working. By about 1 I’d probably only had a little over a couple pounds of small fish with a fair chunk of that coming from the perch so was seriously considering an early departure. About 1.15 I randomly had a decent roach so I thought I’d have one last look on hemp having not done so since about 12. Just like that the swim came alive with good stamp roach most requiring a net along with a couple dace and save for a couple lulls I caught pretty well up until packing up just before 4. Wish I’d tried hemp again half an hour earlier tbh although no idea why they switched on as conditions didn’t change so I can only think that it reached the point where even in the non existent flow they had to feed eventually. Ended up with about 30 roach, about 10 dace, about 20 bleak, 5 gudgeon, 5 chublet and 1 perch which was pretty underwhelming by normal standards but given where I was at around 1 it seemed pretty good. Wouldn’t have been a double figure bag but given the stamp of the afternoons roach it probably would have missed it by ounces rather than pounds which was a result given I was staring down the barrel of just a few pounds at one point. There’s a match on it tomorrow and I spent most the day thinking 10lb would walk it which is ridiculously low for this time of year but if someone can get todays roach going earlier then that certainly won’t be the case.

My grandad was with me again and did his usual lazy feeder fishing which unsurprisingly was awful in such conditions. A couple reasonable perch would have just about got his total over a pound once his a few gudgeon and bleak were added. Also met @Paul_T today who started fishing about an hour after us missing out on the early dace before having a very similar day to me with hours of bleak and chublet followed by a good spell of roach. He was still going by the time we packed up so whilst I’m not sure exactly what pace he was catching at compared to me I’d imagined he ended up with a pretty decent bag.

All in all a bit of a weird session that was probably the worst I’ve ever had this time of the year most of the way through until that run of good roach made it respectable. We don’t half need some rain now but looks like quite a bit is forecast through the week so hopefully the fishing should be back to where it was a week ago with double figure bags easily doable by next weekend’s session. That said I’ve got quite a bit of bait left having not fed much through the quite part of today’s session so I might have a few hours somewhere tomorrow morning to use it up as looks another nice day weather wise.

Pics of the swim, the single perch and a few roach. 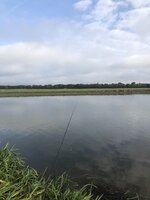 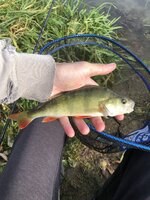 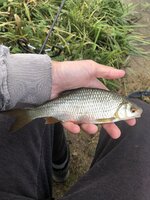 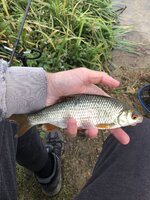 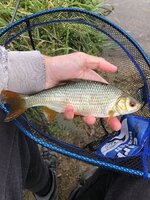 ) who got absolutely nailed by a men’s 8 skiff given they were obviously facing the wrong way and he had no wind to move. First boat on boat crash I’ve seen as far as I recall

Is it just me but, do roach look thier best in autumn, plump and ready for winter and the autumn light just sets them off beautifully?

PJ Rothwell said:
Is it just me but, do roach look thier best in autumn, plump and ready for winter and the autumn light just sets them off beautifully?
Click to expand...

I don’t know tbh mate they look much the same as in summer to me! They lose a bit of colour in the winter when the water goes brown that’s for sure.
P

Maybe the eyes are a deeper red, mine not the roachs'

PJ Rothwell said:
Maybe the eyes are a deeper red, mine not the roachs'
Click to expand...

@Silverfisher was nice to meet you and your Grandad on Saturday.

I had a very similar day to you, although the roach fishing improved later when the boats subsided and the sun dropped behind the trees. It was amazing that the roach wouldn't take a maggot but would have a grain of hemp most runs through. Big thanks to your Grandad for sorting me out some tares as I caught a lot of fish on them later in the day!

Mad isn’t it. Was some good roach weights off the bottom section that we were on which I was expecting but would never have guessed bream would show in those conditions!