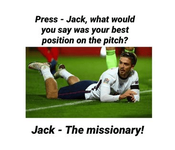 Too many changes each game for me. Get the trying out of players thing, but when it comes to it, we need our standard go to set up, but for all of the games we have now to find this out, this aspect seems to have worsened.

Yeah too many changes, the team seemed stronger against Ireland than Belgium which didn't make sense, still think we need to concentrate on defence as a 0-0 in that game wouldn't have been a disaster, countries like Italy and Germany have won many a world cup on the basis of nicking a 1-0

Also try dropping Kane for some games, I know that sounds weird but France won two world cups, one with no striker and another with a guy who couldn't get in his club side for much of the year. We could have run Croatia ragged with Vardy up top in that semi as Kane was visibly tired, a big call but thems what wins things, like when Ramsey dropped Greaves

I know Gareth likes to browse on here (mainly for the northern match scene) and I know he's gonna take all this info onboard given the amount of football teams we've managed, it's in the bag, World cup glory he we come ?