Joke of the day.

With all the Monkey Pox going around .
Will the Arctic Monkeys be banned from playing this year's Reading Festival ,? 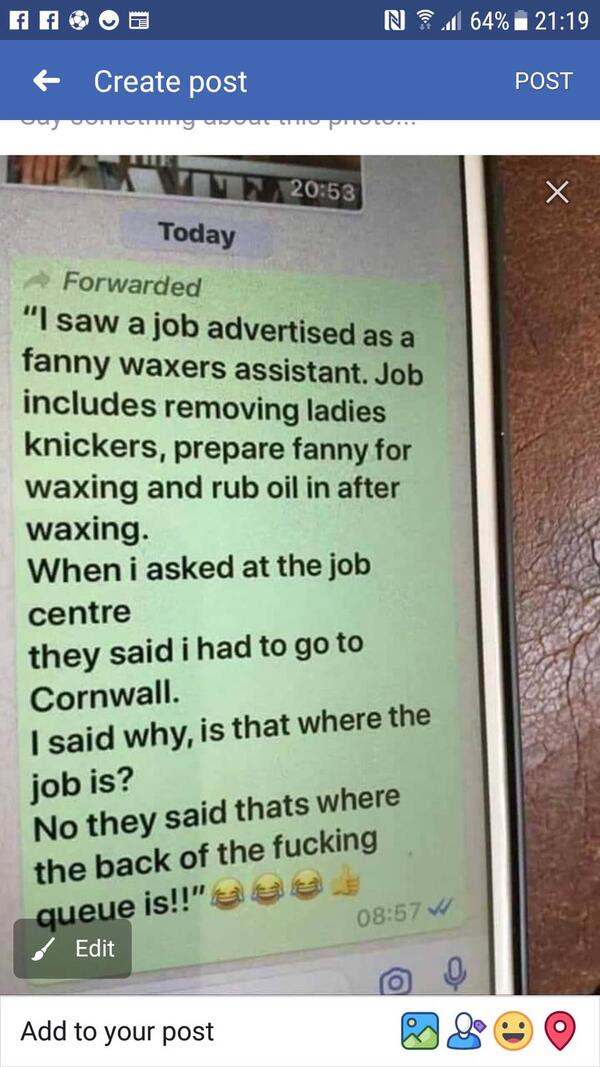 Two men had an unlucky day visiting the sperm bank in London.
Charlie missed the tube and Harry came on the bus.

My flight from Gibraltar to Glasgow has been cancelled,
Now I'm stuck between a rock and a hard place

Dogbert said:
Two men had an unlucky day visiting the sperm bank in London.
Charlie missed the tube and Harry came on the bus.
Click to expand...

When I went there was a nympho on reception, I later found out that she had been sacked for drinking on the job he

Two golfers are about to play 18 holes when one of them says he's going to the pro shop to buy some golf balls, and asks his friend if he needs any balls.

His friend says, "No thanks, I have a ball."

The golfer says, "You only have ONE ball?? You're going to lose that, and then what will you do?"

"What do you mean you can't lose it? What if you hit it in a water hazard?"

"This ball floats, so you can't lose it!" his friend says.

"Then what if you hit it in some deep rough, and you can't find it?"

"The ball has a little strobe light that will start flashing, so you can't lose it!"

"Well what if you hit it way out in the woods and you don't even know where to look for it?" the golfer asks.

"The ball has a little horn inside it, and it will start beeping," his friend says. "So you can't lose it!"

"Wow, that's amazing!" the golfer says. "Where did you get that ball?"

"I found it," his friend says.

Someone keeps sending me bouquets with the flowers all cut off,
I think I'm being stalked

A guy calls a company and orders their 5-day, 5lbs weight loss program.
The next day, there's a knock on the door and there stands before him a voluptuous, athletic, 19 year old babe dressed in nothing but a pair of Nike running shoes and a sign around her neck..
She introduces herself as a representative of the weight loss company. The sign reads, "If you can catch me, you can have me."
Without a second thought, he takes off after her. A few miles later puffing and puffing, he finally gives up. The same girl shows up for the next four days and the same thing happens. On the fifth day, he weighs himself and is delighted to find he has lost 5lbs as promised.

He calls the company and orders their 5-day/10lbs program. The next day there's a knock at the door and there stands the most stunning, beautiful, sexy woman he has ever seen in his life. She is wearing nothing but Reebok running shoes and a sign around her neck that reads, "If you catch me you can have me".
Well, he's out the door after her like a shot. This girl is in excellent shape and he does his best, but no such luck. So for the next four days, the same routine happens with him gradually getting in better and better shape.
Much to his delight on the fifth day when he weighs himself, he discovers that he has lost another 10lbs as promised. He decides to go for broke and calls the company to order the 7-day/25 lbs program.

"Are you sure?" asks the representative on the phone. "This is our most rigorous program." "Absolutely," he replies, "I haven't felt this good in years."
The next day there's a knock at the door; and when he opens it he finds a huge muscular guy standing there wearing nothing but pink running shoes and a sign around his neck that reads, "If I catch you, you are mine."
He lost 33 lbs that week.

One day an Irishman who had been stranded on a deserted island for over 10 years, saw a speck on the horizon. He thought to himself, "It's certainly not a ship." And, as the speck got closer and closer, he began to rule out the possibilities of a small boat or even a raft..

Suddenly there emerged from the surf a wet-suited black clad figure. Putting aside the scuba gear , there stood a drop-dead gorgeous blonde! The glamorous blonde strode up to the stunned Irishman and said to him, "Tell me, how long has it been since you've had a cigarette?"
"Ten years," replied the amazed Irishman. With that, she reached over and unzipped a waterproofed pocket on the left sleeve of her wet suit, and pulled out a fresh pack of cigarettes. He takes one, lights it, and takes a long drag. "Faith and begorra,"said the man, "that is so good I'd almost forgotten how great a smoke can be!"

"And how long has it been since you've had a drop of good Irish whiskey" asked the blonde.
Trembling, the castaway replied, "Ten years." Hearing that, the blonde reaches over to her right sleeve unzips a pocket there and removes a flask and hands it to him. He opened the flask and took a long drink. "Tis de nectar of de gods!" stated the Irishman. "Tis truly fantastic!!!"

At this point the gorgeous blonde started to slowly unzip the long front of her wet suit, right down the middle. She looked at the trembling man and asked, "And how long has it been since you played around?"
With tears in his eyes, the Irishman fell to his knees and sobbed;,
"Sweet Jesus! Don't tell me you've got golf clubs in there too!"

HER: "My friend says that any guy who calls his girlfriend 'Babe' either can't remember her real name,
or he's scared he might use his other girlfriend's name. You call me 'Babe' all the time!"

HIM: "Of course I know your name. Sharon. You name will always be written across my heart.
And I love you totally and completely. There are not, and never will be any other women
in my life.

So your friend is completely wrong.

I call you 'Babe' because you look like Oliver Hardy ! "

It was 1964 and Paddy was sitting in his local pub in Kerry when a fine looking Italian woman walks in.
He offered her a drink and over the course of the night he charmed her with funny Irish stories and songs.
She’d never had a night like it before and decided to invite him back to her room.
They had a passionate affair all that summer.

One night, she confided in him that she was pregnant. Not wanting to ruin his reputation or his marriage, he gave her a large sum of money and told her to go back to Italy to secretly have the child.
He said that if she stayed in Italy to raise the child, he would also provide child support until the child turned 18.
She agreed, but asked how he would know when the baby was born.
To keep it discrete, he told her to simply mail him a post card, and write 'Spaghetti' on the back. He would then arrange for the child support payments to begin.

One day, about 9 months later, he came home to his confused wife. "Honey!" She said. "You received a very strange post card today."
"Oh, just give it to me and I'll explain it later." He said.
The wife obeyed and watched as her husband read the card, turned white, and fainted.

Two gay cowboys, one said “yup”. The other replied “yep”

Then there was the homosexual cowboy who rode into town and shot up the sheriff.
That same cowboy a week earlier had arrived wearing a brown paper suit.
He got arrested for rustling.

I just thought I'd throw a picture of luscious lady friend and me on holiday. 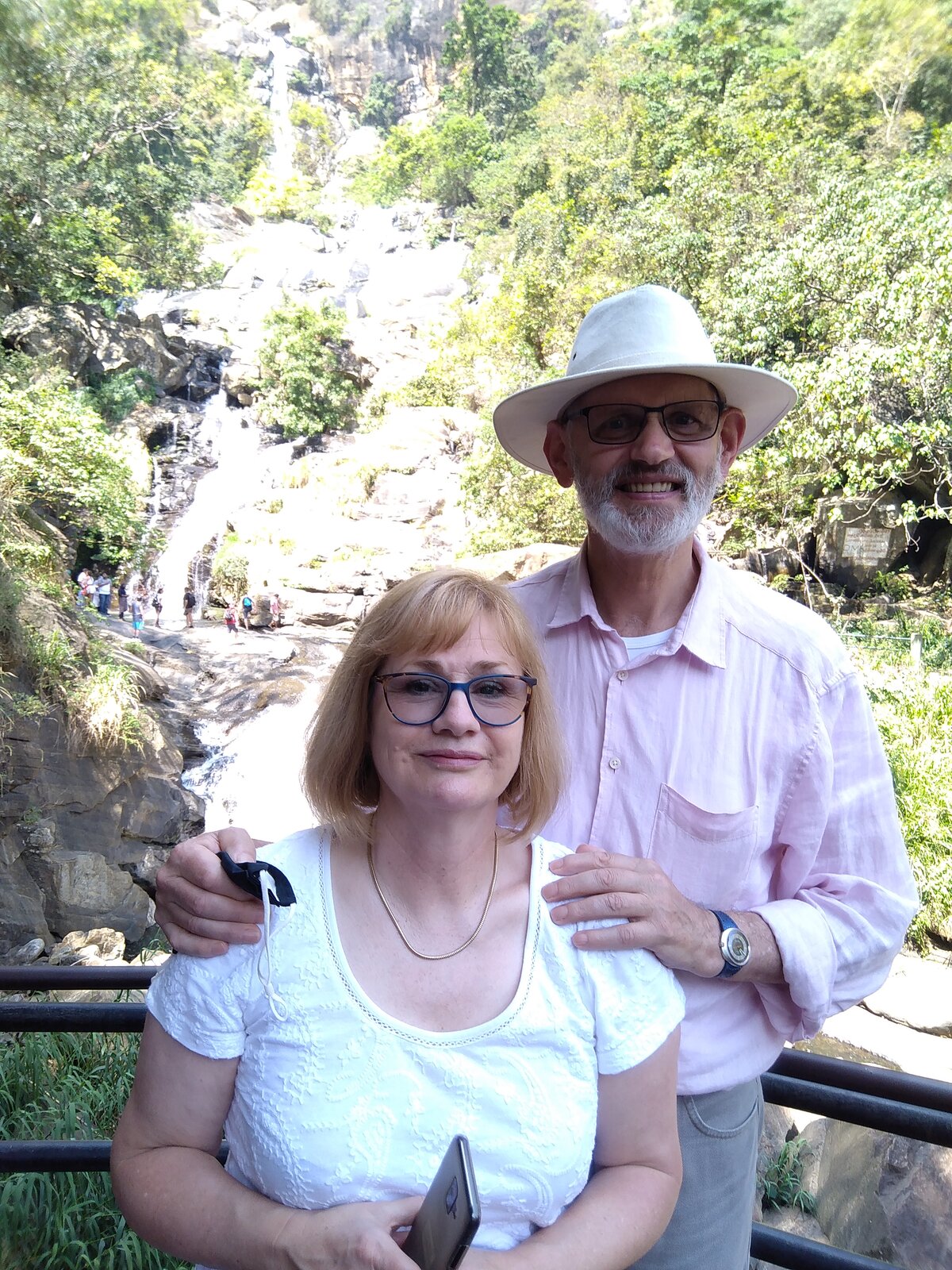 An American touring Spain stopped at a local restaurant following a day
of sightseeing. While sipping his sangria, he noticed a sizzling,
scrumptious looking platter being served at the next table. Not only did
it look good, the smell was wonderful. He asked the waiter, "What is that
you just served?"
The waiter replied, " Ah senor, you have excellent taste! Those are bulls
testicles from the bull fight this morning. A delicacy!"
The American, though momentarily daunted, said, "What the hell, I'm on
vacation! Bring me an order!"
The waiter replied, "I am so sorry senor. There is only one serving per
day because there is only one bull fight each morning. If you come early
tomorrow and place your order, we will be sure to save you this delicacy!"
The next day, the American returned, placed his order, and then that
evening he was served the one and only special delicacy of the day.
After a few bites, and inspecting the contents of his platter, he called
to the waiter and said, "These are delicious, but they are much, much
smaller than the ones I saw you serve yesterday!"
The waiter shrugged his shoulders and replied, "Si senor. Sometimes the bull wins!"

“Beat me, whip me” screamed the masochist.

My mate's girlfriend just texted him: "thespacebuttononmyphoneisbrokecanugivemeanalternative?"....
He wants to know what 'ternative' means...

Just arrived home to find a pretty woman grouting the bathroom wall & singin 'its a heartache,nothing but a fools game' I thought to myself, shes a Bonnie Tiler

Just joined an online Arsonists dating Site , you get new matches every day

Anniversary of the D Day Landings

One for the film watchers