Ken the Pacman said:
Could not resist sorry

Personally I think some Japanese women are amongst the most beautiful in the world.
(Well on the videos I’ve seen, anyway

Zerkalo said:
Thoughts about Japan? Ever been there? I've always wanted to go but never had the chance.

For a while you could have called me a Japanophile. There was a time when they seemed very futuristic, leading in technology and culutural stuff. But that seems to have faded now?

A lot of people, my parents generation and older, might still see them as a brutal nation for things they did during WW2 especially.

But from an orientalist perspective they still seem like a pretty impressive country no?

I wanted to visit Japan to look at the koi ,the fantastic gardens and countryside . The Japanese are a very proud people ,the culture us amazing and technology absolutely brilliant. Cleanliness is unbelievable looking at many videos and talking to people who have been.

I too would like to visit Japan. In particular I want to attend a proper Sumo Basho. Many years ago I was lucky enough to get tickets for the demonstration Basho at the Royal Albert Hall. But to be able to watch one in Tokyo is probably the last thing on my "to do" list and I accept it may never happen.

To understand how the Japanese fought in WW2 would require a lot of reading and understanding of their culture and devotion to the Emperor. All part of what makes them the people they are. The way they have embraced a peaceful existence since is also testament to the culture.

Is there any one of us that drives along a road looking at the litter lined verges and does not wish we lived in a land where the culture meant that the majority see such littering as abhorrent? And more to the point, would do something about it.
C

Blaming the Japanese for atrocities carried out in WWII is not entirely fair. The brutality that took place in Burma and other regions was carried out by Korean soldiers.

Some good points made, yes our roadside verges say a lot about us

I do not watch reality TV I did one day however catch the end of a previous program about crime. Three young men being led off
to the cells, all three had one thing in common, they were all laughing. I suspect in Japan they would be hanging their heads in shame.

Doesn't Japan have a big criminal underworld though, Yakuzas and so on?

I wouldn`t know but I doubt if organised crime recognises borders.

I should rewatch Black Rain with Michael Douglas, where I get most of my insight from.

One of the highest suicide rates in the World. If they think they’ve dishonoured their family then they end it.

Seen a film Suicide Squad which wasn't bad. And they have Seppuku, a method of knifing themselves. You can learn a lot from films haha!

Here's ten films that have given me a bit of an insight. I used to watch a lot more old Japanese films. Kurosawa, Mizoguchi etc even saw some Ozu films at the cinema, but they're a bit dreary, kind of housewife dramas but critically acclaimed.

The Last Samurai with Tom Cruise was pretty good. Historically pretty accurate too.

There is a lot of cobblers talked about films, remember they are for entertainment not for being taken too seriously.

I have my film critic hat on now so listen up.

The best film of all time is `Shaun the sheep the movie`. It makes me laugh, even though I have watched it no end of times there
are still little cameos that I have missed.

Another great film is `The franchise affair`. A beginning, a middle, an end with a good story but above all the wonderful Dulcie
Gray. Worth watching simply for this most beautiful of women.

Like many on here I enjoy my history but something above all makes me uneasy and that is the sheer cruelty of the human race.
Wether say the Germans ploughing through the east or the people of the east taking revenge I would like to think my humanity
overcomes all, would it though? Who knows until we are in a position to play God.

I'd agree films are for entertainment. I was always from that perspective on film forums compared the Humanists who thought watching World Cinema taught us something about the Human Condition whereas I got more into Hollywood films.

The thing about a lot of Japanese films, a lot of them set in Feudal Japan with Samurais scuttling about, not really my thing anymore, a lot of them were based on Shakespeare.

I suppose all that shows is that the Japanese learned from the west including getting a political constitution. Seems it was just the right mix of things and a warrior spirit that makes them what they are. But really I think half of what appeals to me is just the oriental Neon Lights of Tokyo.


I am pretty quick to forgive too though, and generally expect the same when it comes to all the bad things British people did years ago. I like Germany and Russia too for instance, but older people might be the same age to be walking the same streets as communists or people they fought against. Generally I think most people are good and just easily led into doing bad things.

Japan is Britain holding a mirror to itself in an alternative universe... both island nations of similar size, just that we abandoned the feudal system a couple of hundred years before they did, and our culture took completely different routes.

From what I know, the Japanese are more intrigued by the quirky British than they are by the majority of the other western countries. There's a desire to understand and appreciate, which I think is a feeling that is generally reciprocated.

Great post and I'd agree with that. Things like Harry Potter are big in Asia in general I think. But then I think why don't we have loads of Japanese living here and I think for the most part the Japanese are similar in that they like their own culture, call others Gaijin, and would prefer to keep a romantic distance, whereas the Chinese are big time foreign investors.

Always fancied Japan. Very little petty crime there apparently (yes I know you have the Yakuza mobsters) but I remember reading that if you left your wallet or handbag on a park bench, it would still be there the next day. 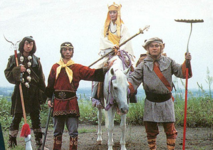 Anyone remember The Water Margin?