Excruciating cramp woke me at 6.30am. I was expecting rain but looked out of the window & it was a lovely morning so decided to have a few hours on the bankside. Loaded the car & headed for our Roadside Pond. As I pulled up, I had a change of mind & decided on the Carp Pond instead. One of our most difficult waters & despite the name, throws up more Tench than Carp. Empty car park & had the pond to myself all morning.
As with a lot of our ponds, small rudd are a plague so I decided against fishing expanders which they shred in no time & fished corn on the hook. Fishless for an hour but I'd been feeding my right & left margins all the while and moved to my left. There's some beasts in there so I loaded up with 14-16 solid elastic & was immediately rewarded with a nice chunky mirror around 4lbs. Ten minutes later, I felt the pleasant thump of a decent tench. Moved to the right margin & had a lengthy scrap with another mirror, No scales on me but I reckon about 8lbs. Not very long but it's girth was massive.
Really enjoyable morning in beautiful surroundings & the company of a couple of dragonflies. 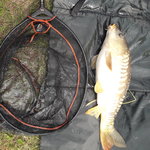 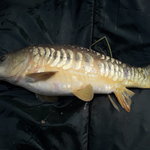 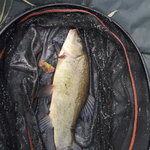 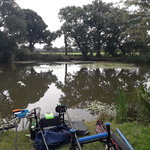 That looks a nice lake.

Pickard1 said:
That looks a nice lake.
Click to expand...

It's a lovely lake mate. Very difficult though & nobody will ever "bag up". Only the second time I've fished it but apparently people do better in the evenings.
Also had a couple of hand sized Rudd.
T

The Landlord said:
It's a lovely lake mate. Very difficult though & nobody will ever "bag up". Only the second time I've fished it but apparently people do better in the evenings.
Also had a couple of hand sized Rudd.
Click to expand...

Cracking session mate. Not fished the Carp yet, lovely looking water what hook bait did you use. I had a cracking little session on clover early morning last week using Swimstim green paste. Some right lumps!

Swim Jim said:
Cracking session mate. Not fished the Carp yet, lovely looking water what hook bait did you use. I had a cracking little session on clover early morning last week using Swimstim green paste. Some right lumps!
Click to expand...

Corn Jim. Keep meaning to give paste a bash on there but I didn't take any with me. I had a short spell on expander but the rudd shred it off your hook. Fed up of bringing in a bare hook. 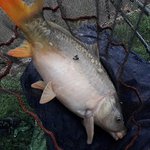 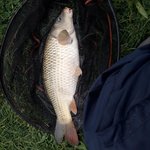 Had another session today for 3 hours on our biggest lake, the Clover. Hit a decent carp after a few minutes but the hook pulled & then managed to land a chunky mirror of around 4lb. Another hook pull as I was netting a nice tench and then I had a couple of decent crucians. Tried paste in the margins & a behemoth dragged me into the lilies, smashing my float. Managed to get everything back including the hook though. One last go on paste saw a decent scrap from this nice common. Made a bit of a horlicks with my Green Betaine paste though, it was too soft & couldn't get it to stay on the hook long enough. I mixed a bit of Supercrush Fibre into it which stiffened it a bit in the end.

Back on the Clover for four hours this afternoon. Fished the same peg as last time & was rewarded with a lump of a mirror after 20 minutes on expander. Hit another immediately as I went back in but the hook pulled. Didn't have to wait long for another as I caught the twin of the first fish. Nothing for two hours then but I had been feeding the margin & brought out the paste I had frozen after my last session. A few missed bites but then landed two more lumps which gave a good account of themselves. Added a few roach, a nice Crucian but my biggest achievement was landing a gudgeon on paste & size 20 Drennan Red Bungee elastic 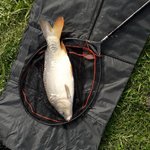 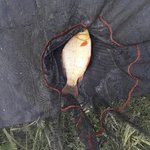 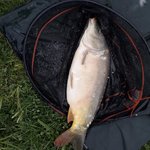