Joint patrols have been carried out on waterways in Northamptonshire to crackdown on anglers fishing illegally during the close season or without a licence.

On Sunday 2 May 2021, officers from Northamptonshire Police, the Environment Agency and members of the Angling Trust’s Voluntary Bailiff Service were joined by the Trust’s National Enforcement Support Manager Nino Brancato and Building Bridges Manager Janusz Kansik to patrol as part of Operation Clampdown 9 – a partnership initiative designed to specifically target anglers that flout the rules and ignore the fishing close season on rivers.

Operation Clampdown runs from 15 March – 15 June (inclusive) and is now well established in the angling calendar – this is the ninth year the close season crackdown has been organised. 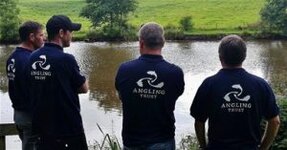 The joint patrol was organised by Paul Thomas, the Trust’s Regional Enforcement Support Manager for the East of England, in response to information shared by local anglers and intelligence formally reported by VBS members detailing fisheries issues in and around Northampton town centre. It included wildlife crime officers from Northamptonshire Police, the EA’s local Fisheries Enforcement Officer and members of the VBS.

During a socially distanced briefing carried out by Paul Thomas, a number of local waters were identified as being worthy of attention on the day and plans were drawn up to visit these waters in rotation. 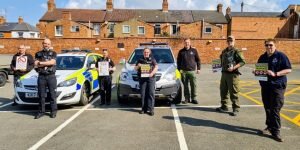 During the early part of the day a number of illegal instruments and crayfish traps baited with chicken pieces were recovered from the river Nene in the town centre, along with one person being issued with an EA Offence Report Form for fishing the river during the closed season. 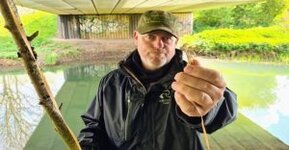 Later in the day, visits were made to various still waters in and around Northampton town centre where anglers were spoken to with very few requiring formal interaction with the Police or the EA. What was very apparent was just how happy the lawful anglers and members of the public using the waterways on the Bank Holiday weekend were to see wildlife crime officers and enforcement officers from the EA out with the AT volunteers with all committed to looking after their waters. 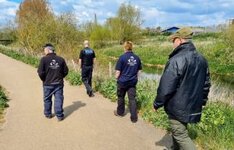 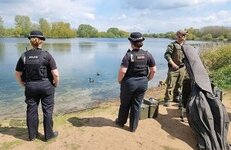 Paul Thomas said: “You really cannot put a price on just how reassuring these days of action are, to both the local anglers that play by the rules and the rural communities that angling is often associated with.”

He added: “Further similar joint patrols involving our valued volunteer bailiffs, the wildlife crime officers from Northamptonshire Police and the EA Fisheries Enforcement Officer for the area are already planned so that those people that choose to break the law and fish illegally should always be looking over their shoulder as they just might end up with a criminal record if caught.”

Similar Operation Clampdown patrols have already been carried out in other areas of the East of England with further patrols already organised for the coming weeks. To be sure of not being caught out don’t forget there’s only one place you need to buy your Environment Agency licence – www.gov.uk

The Angling Trust’s Fisheries Enforcement Support Service, VBS and Building Bridges work in partnership with the Environment Agency as part of the National Angling Strategic Services contract, and are funded from fishing licence income.