It's been driving me mad trying to remember the name of this film. It's a black and white job and essentially has a monster/creature in it that is a creation of a scientists 'id'.
No, it's not Forbidden Planet!
All I can remember is at the end of the film the creature is bearing down on a house where the cast are assembled, they've tried to kill it with various electrical wires fastened to telegraph poles and in the end the scientist sacrifices himself to it.

If anyone can help me identify it there's an extra satsuma in your xmas stocking possibly.

Rita Sue and Bob too

Love Forbidden Planet . I recognise the film from what you say about attaching wires to kill it. First thought was The Day The Earth Stood Still but it does not match the plot you describe.

It's good but it's not right!

I just knew he would know you know....

Is it “fiend without a face” by any chance ??

Forbidden planet is an amazing film - absolutely love it

Love how almost everything makes a noise in it. A sound designers dream.
M

OldTaff said:
Is it “fiend without a face” by any chance ??
Click to expand...

Not sure on that one 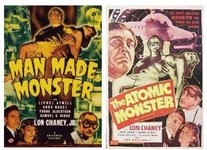 What type of fish is this please?
2

Another week at Waterside