I went to Birch House Lakes again this morning. All the lakes were frozen over with about an inch of ice. Not easily deterred however I dug the weed rake out of the van (like a heavy rake head on a piece of rope) and set about breaking the ice. The first three throws bounced straight off so I resorted to absolutely hurling it at the ice. I did eventually clear a small area in front of me and just to my right about ten feet down my margin. I then scooped as much of the broken ice out with my landing net and succeeded in pulling out the crayfish trap in my swim. The whole process took a good half hour.

I mixed up a small bowl of Sensas Black Magic and threw a single ball in (actually I threw two balls because the first missed the water as you can see in the photo ). I then set up and fished a small 20g cage feeder with a 12” hooklength and a size 18 QM1. I put three red maggots on the hook. Within an hour the water had frozen over again so I broke the thin layer with my landing net and fished it all out again. It didn’t freeze again after that as the sun had come out by this point. 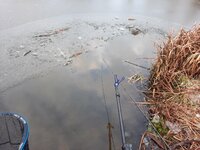 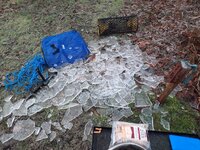 I fished the same basic method for three hours as I believed that under the extreme circumstances it was the best, if not the only method. I tried switching to a single maggot and two maggots but I was getting loads of twitches and some serious pulls with three on so I settled back on that. It was a bit infuriating because I kept getting takes but couldn’t hook anything well enough to reel it in. They just kept nicking my maggots off the hook. I’d arrived at 7.30 and it was now ten to eleven and I decided the lure of the warm van was getting a bit too strong to resist. I decided I would pack up at eleven. Then I had a small twitch on the tip followed by small but regular smaller twitches. I reeled in and discovered I had a massive (2oz) perch on. As evidence I hadn’t blanked I unhooked and photographed it. It may have been very small but it was very welcome . 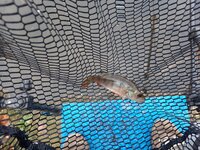 The bailiff told me I was the only person mad enough to be out fishing. There was no one else fishing on any of the nine lakes. I’m really glad I went though. I thoroughly enjoyed myself and I’ll be out again next week breaking the ice . 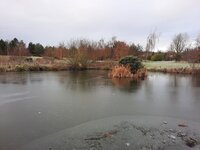 Well done for getting out. Why feeder instead of a small sensitive float rig in such a limited area though?

WickerDave said:
Well done for getting out. Why feeder instead of a small sensitive float rig in such a limited area though?
Click to expand...

It was just easier because there were bits of ice floating around and it kept refreezing.

Took a couple of newbies out today to Clay lane, Mobberley. -3 degrees at 8 o'clock this morning and the whole lake was frozen over..............except 2 spots. Having had the foresight to phone the owner yesterday to get him to put the aerators on last night kept these 2 areas clear. coach!!

i can remember a few years ago we had a really bad winter and Birch house lakes were frozen solid
i think the owner had been breaking the ice ,the was a big block of ice on lake one 14 inches high
,ive got a photo some where of it with my mate standing on ice near it