Never fished with a pole

Never fished in the sea, but want to have a go from either a boat or the beach, eaten plenty of things I’ve shot but nothing I’ve ever caught.

never fished in a thunderstorm
L

Never caught 100 lbs of fish in an MD match yet (or anywhere else for that matter) but it's not for want of trying.
T

Len Wade said:
Never caught 100 lbs of fish in an MD match yet (or anywhere else for that matter) but it's not for want of trying.
Click to expand...

I've posted this before, but this was my only time fly fishing (yes I was allowed a go). 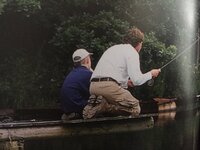 Zerkalo said:
I've posted this before, but this was my only time fly fishing (yes I was allowed a go).

I have never tried fly fishing.
Although I have once used a fly rod with dog biscuit to catch carp off the top.
D

Never yet caught a record fish in England.

Did once land a tench above the then Scottish record…..

Never used a badminton net in stream to catch a sea trout. Take a photo and return unharmed

Ps many moons ago so kids to get a photo

bryan white said:
I have a set of 4 whips, even have the floats for them
So far never caught a fish using one
Suppose actually taking them for there first visit to the bank might help..on my to do list
Click to expand...

If you are still a member of Farnham try Wyke pond with some maggots should be able to catch a few Rudd not big but plenty of them, take some soft pellets to try and sort out the better ones.
P

Never fished a commercial, caught a bream, or used a pellet or boilie!

tincatim said:
Seeing a few posts about centrepins this morning, made me realise that I’ve never used a centrepin. And despite fishing rivers for years I’ve also never caught a trout! And I’ve never caught a single fish on expander.

I have, get many more bites than when trying a bit of phishing!

Barbelcatcher said:
Never want to sit behind a pair of buzzers
Click to expand...

Sit to the side then

I always drop them as very slippery.

I'll get me coat

Reading through the list of people's "nevers" I realise that I have done an awful lot in my fishing life.

Sea fished from shore and boat (including after barracuda in Florida)
Fly fished, though not on a river
Used a centrepin
Caught all manner of species including zander, pike, grass carp, bitterling (Decoy lakes), pumpkinseed fish, catfish (small), sturgeon (sterlet?), trout, flounder from a trout stream (my first fish) but not caught salmon or sea trout though I did once have a sea trout chase a worm I was retrieving.
I have fished in England, Scotland and Ireland as well as Belgium (won a match there) and France
Fished most coarse methods except lure for pike & perch and "carp" fishing behind multiple rods
Beaten a world champion (Joe Roberts)

So I guess there isn't much left for me to try.
A

G
Never fished a pole before.