So back to the club lakes again and after a drive around I settled on peg 37 on the second lake (red X in the picture below) at around 11am.

Today I decided that the pole would be staying in the holdall and I would have a session on the method feeder for a change. Of course that could well change if it didn't produce as I still had it there with me in the rod holdall. Setting up only took a matter of minutes as the rod was already set up, it was just a matter of soaking some micro's and a bit of groundbait and opening a tub of 6mm pellets that would be banded onto a size 14 QM1 on a 4 inch hooklength with a free running 36gm Guru method feeder to finish off the set up. The plan being to fish off to the left hand side of one of the three floating islands in the lake (area marked in yellow in the photo). 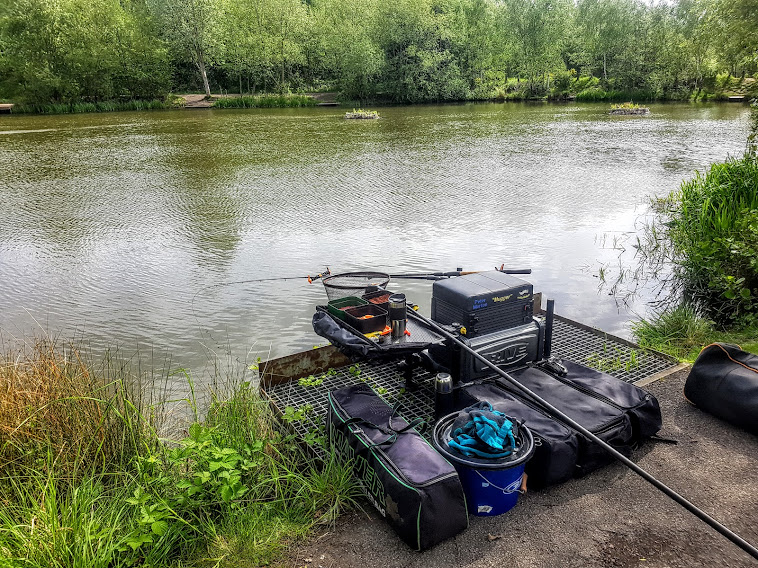 Now as I was about to make my first cast @Geoff P arrived, he'd heard I was coming down and had popped over with his camera for a catch up.
Good job he did as it happened as on my second cast the tip wrapped round not long after the feeder settled, Initially the fish came towards me relatively easily as steady pressure told but about halfway in the resistance became a bit more spirited. Obviously a Carp, I finally got a glimpse of it and realised that it was a decent fish.
The only nervous moment came as I went to net it and realised it was a bit bigger than my landing net No problem though as it went in head first and a little shuffle of the net saw it's tail slide in. Lifting it out I realised it was a properly plump Linear Mirror. No scales with me today but both Geoff and I put it somewhere between 15-17lbs and luckily Geoff had his camera to hand to capture the moment. With the fish safely returned and the baited feeder cast back out Pete the Bailiff ( @ukzero1 ) appeared. He'd been out shopping with his good lady this morning and had now escaped and suitably equipped with a comfy camping chair had come down for a couple of hours of chat and relaxation having baited a few spots in preparation for this evening's pest control duties.

In all honesty I was more than happy enough to get off the mark on this lake with that Carp, so anything that followed would be a bonus, and follow they did, not in the shape of another Carp but a regular succession of Skimmers with a few better Bream around the 3-4lb mark mixed in. Geoff had to leave at that point to collect a prescription leaving Pete and I to continue our chat with Pete trying to persuade me to break out the pole for a crack at the nice looking left hand margin with an overhanging tree, He didn't succeed though, that could wait for another day.
Regular bites started to slow down a bit as the sun started to break through the cloud cover but the swim still kept producing a regular run of fish including a few plump little Hybrids among the Skimmers and better Bream. 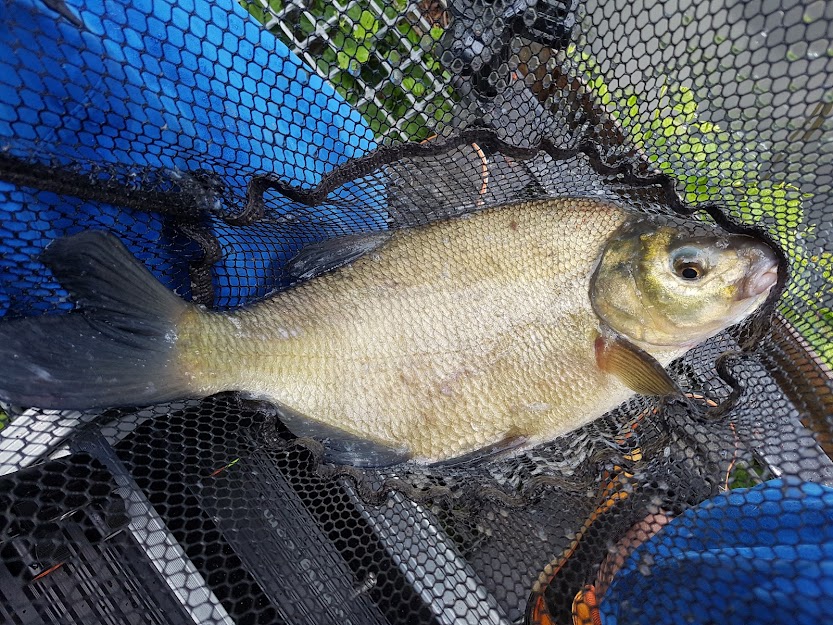 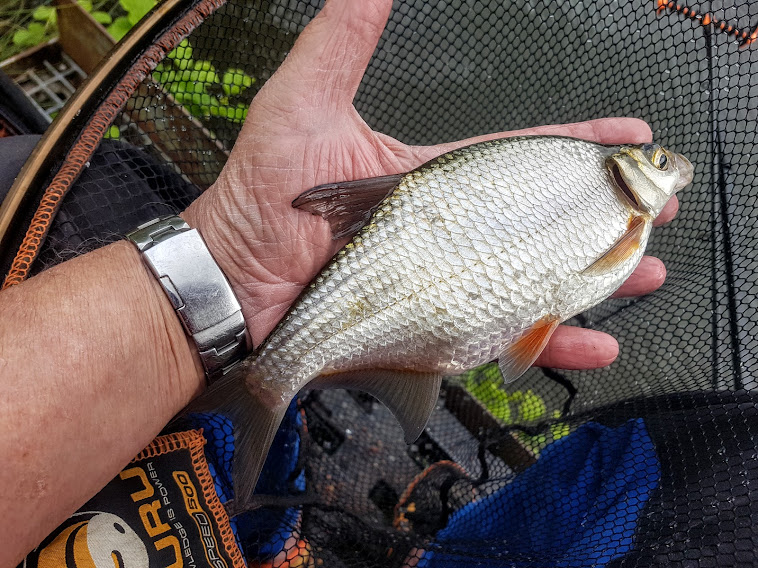 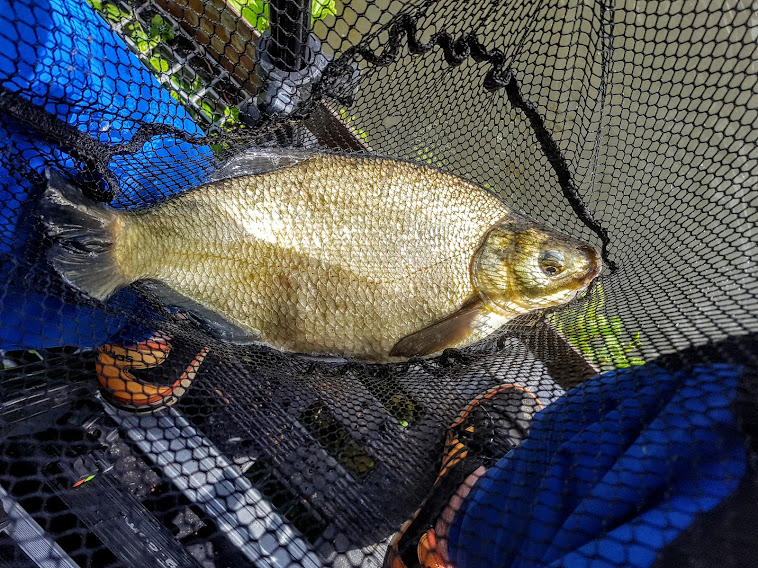 A little after 3pm Pete bade me farewell and left me to it. He had to get home for his meds and it was his turn to cook tea before he ventured out on his pest control duties later.

The bites kept coming but with a good 10-15 minutes between them. It seemed that the Skimmers and Hybrids had moved off to pastures new however as each bite was resulting in a decent sized Bream, so they were worth waiting for. 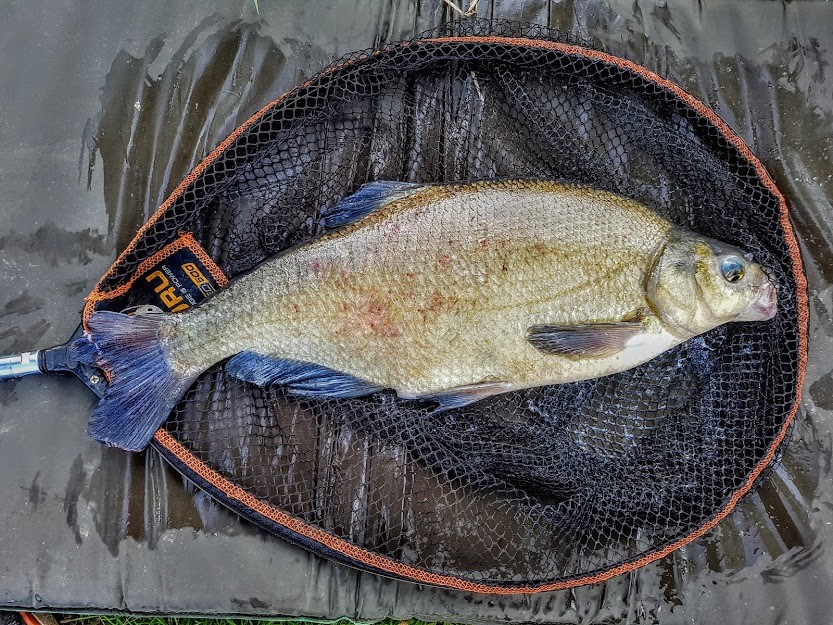 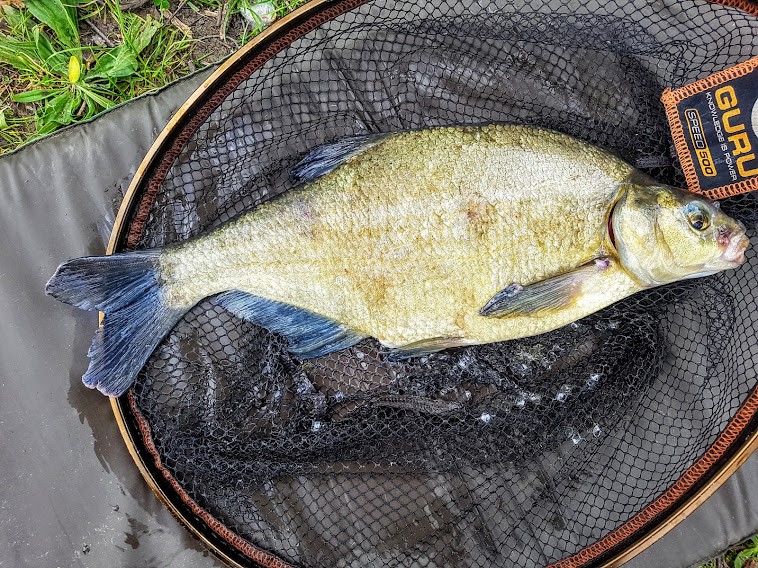 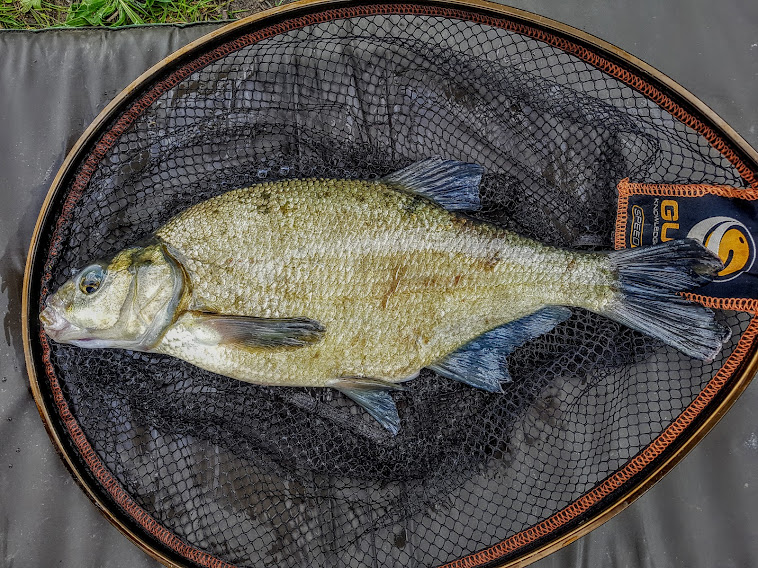 By around 6.30pm I had used up the last of the micro's and groundbait and after one last Bream I decided to call it a day. The final tally was 1 Carp and 47 assorted Skimmers, Hybrids and Bream. Another enjoyable session and with plenty of swims still to explore I'm really looking forward to further sessions down here.
Watch this space for reports on those sessions.

Excellent Peter, that Carp was a belter

Great write up and photos, thanks very much for sharing Peter. It looks like a really pleasant venue to fish and have a chat to folks. Nice one.

Nice to see you catching buddy but I must admit to being a bit nonplussed. Why did you have to join the club and, I assume, pay for the privilege, when your mate is bailiff? Has @ukzero1 never heard of ‘looking after’ fellow MD’rs

Dave Spence said:
Nice to see you catching buddy but I must admit to being a bit nonplussed. Why did you have to join the club and, I assume, pay for the privilege, when your mate is bailiff? Has @ukzero1 never heard of ‘looking after’ fellow MD’rs

Erm excuse me Mr. I did put him onto the fish to save him the humiliation of blanking. Even told him which peg.

ukzero1 said:
Erm excuse me Mr. I did put him onto the fish to save him the humiliation of blanking. Even told him which peg.
Click to expand...

Did you charge him for the coaching session?

Dave Spence said:
Did you charge him for the coaching session?

Ooh, I didn't think of that. Another missed opportunity

ukzero1 said:
Ooh, I didn't think of that. Another missed opportunity

You are now in the poor, confused, pensioners club mate

Cheers Stu,
I'm only just starting to scratch the potential of the lakes at the moment, it's going to take a while to even start to get to grips with them and explore their potential but with the club having a diverse stocking policy it's fun not knowing just what's on the end when the float slides away or the tip wraps round and that's a big part of the appeal for me.

Well well after a day spent in the garden mowing the lawns and doing a bit of weeding, it's just started to gently rain here but the forecast for tomorrow looks decent (19°C, sunny intervals and a gentle breeze) so I think a bit of R&R in the form of another session down the lakes is called for.
It's a hard job but someone has to do it.

This morning was quite dull and overcast (Had the forecast lied?) Not to worry a spot of breakfast and a couple of cups of coffee and another check of the forecast promised some sun for the afternoon, so time for another coffee and a quick browse of the forums before loading the kit into the car and setting off to the lakes.
Now the plan today had been to have a go from peg 34 as Pete had told me that it was a favorite of Tommy Pickering's back in the day but on arrival there were a few on including somebody on 34. Peg 37 which I had fished last Friday however was free, a nice comfy peg so I decided to give it another go. 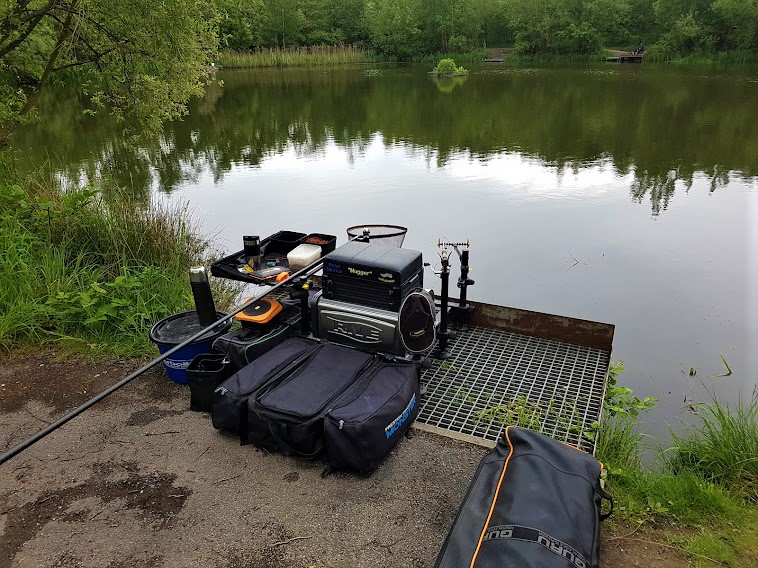 Like the previous time I set up the method feeder but unlike last Friday today I also set up the pole with the intention of giving it a go down the left hand margin later in the day.
Bait wise today was going to be pellet all the way as I hadn't bothered to get any maggots from the tackle shop. Micro's with a bit of groundbait on the method and 4mm's and 6mm's to be fed into the margin at top 2+3 and fished banded on the hook for both feeder and pole.

So just after Noon it was out with the method to the left of the floating island as per Friday. The first 4 casts produced nothing but tremors on the tip, nothing making off with the bait. The fifth was a charm with the tip wrapping right round. At first I thought that I'd missed it but as I retrieved the feeder I noticed a flash of silver behind it which proved to be a feisty little Skimmer. Off the mark, happy days This was soon followed by one a bit larger, bronze in colour with its head covered in spawning tubercles By this point I had already started trickling a few pellets in down the margin line to prime it for later on, but for now it was a case of continuing on the method. The sun was starting to poke through the fast clearing clouds and it was obvious a sunny afternoon was on the way.

So were more Bream and a good number too with an average size of around the 3 - 4lbs mark with only the occasional smaller skimmer braking the pattern. 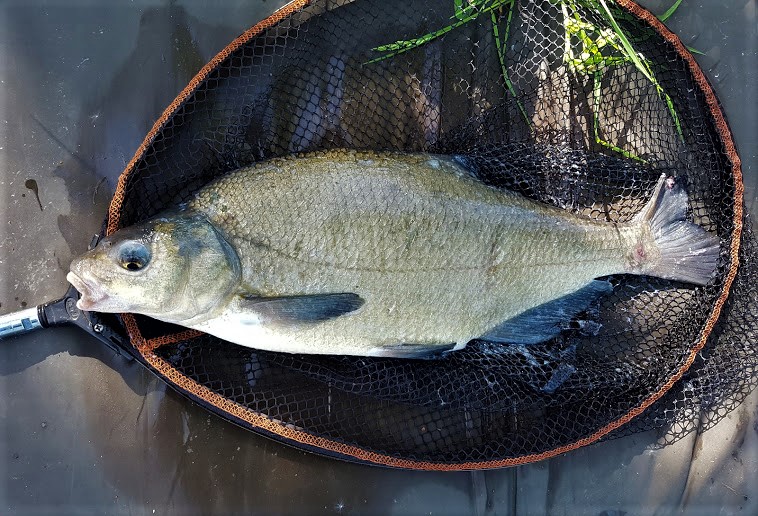 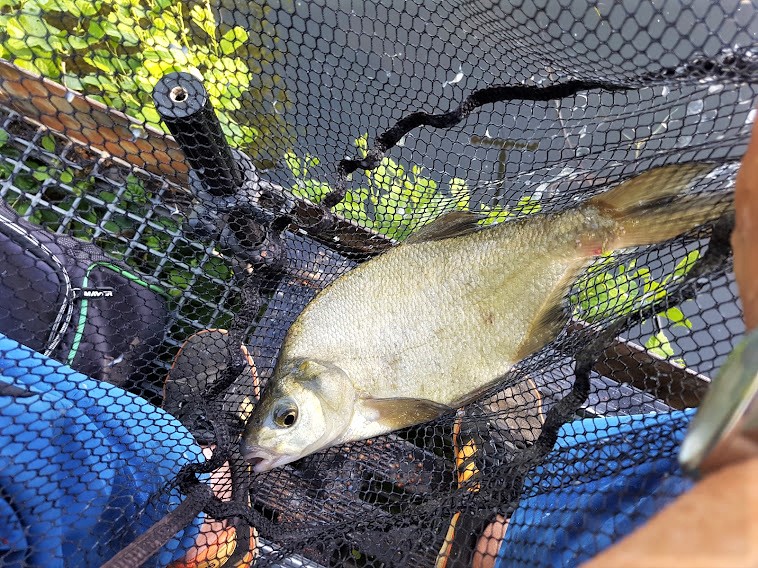 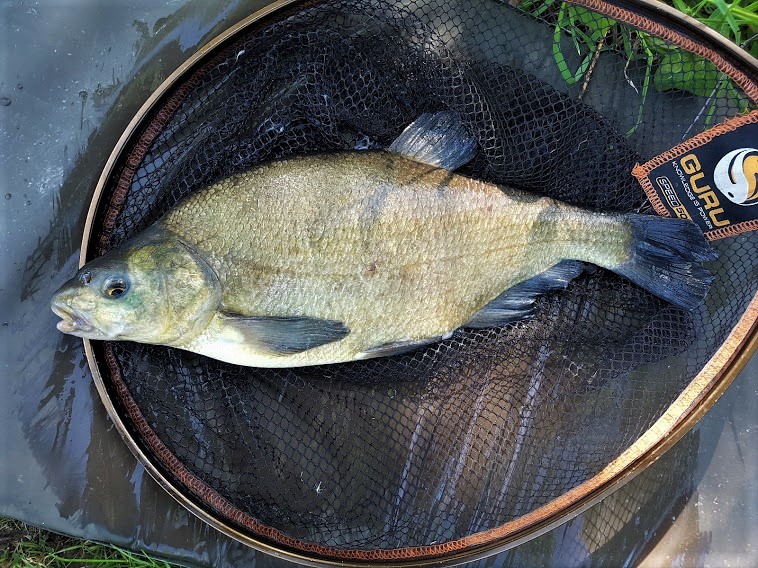 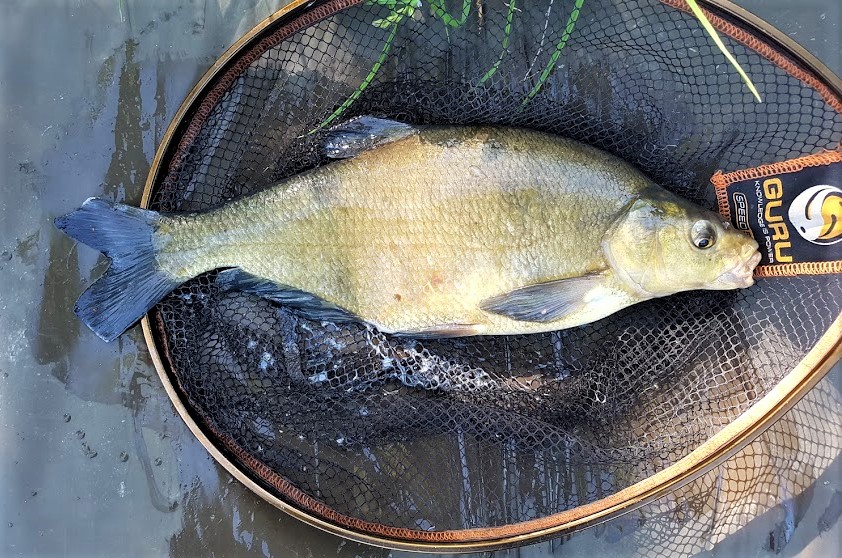 By 5pm the figure on my clicker sat at 37 and I was more than happy with that, so time for a look down the margin.

Well the action down the margin was instant and hectic but not in a way that I was expecting. Fishing a 6mm pellet. I had set up in a similar fashion to my first visit expecting Carp to show up at some point so the top kit was rigged with NG Ultra Core Elastic, 14-16, along with a 0.3 NG XT Cane Tip Lake float on 0.17 to a 0.15 hooklength with a 14 banded Kaizen at the business end. The float was burying within 5 seconds of laying the rig in but instead of the hoped for Carp it was Roach after Roach. 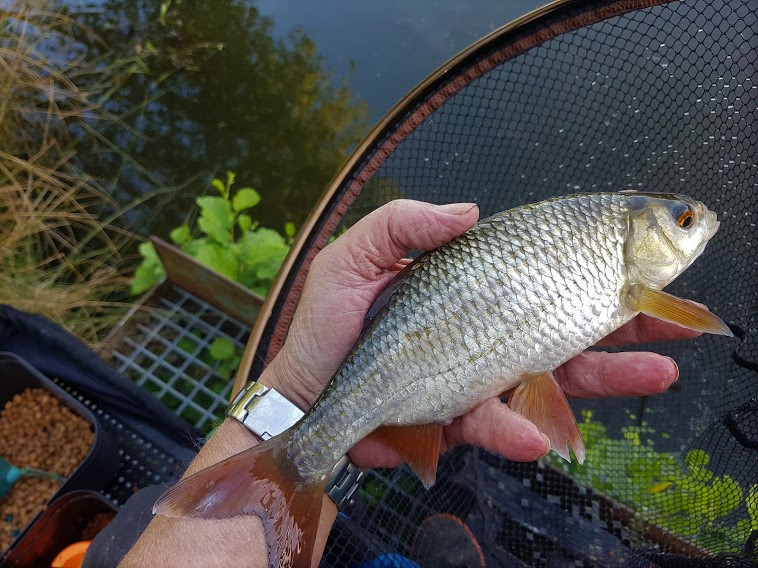 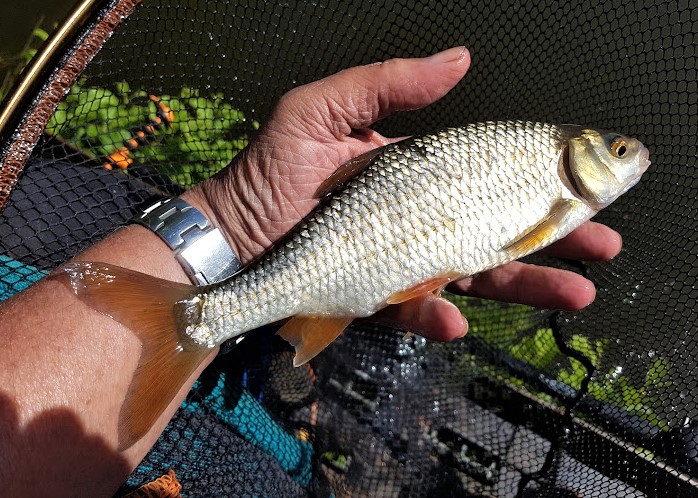 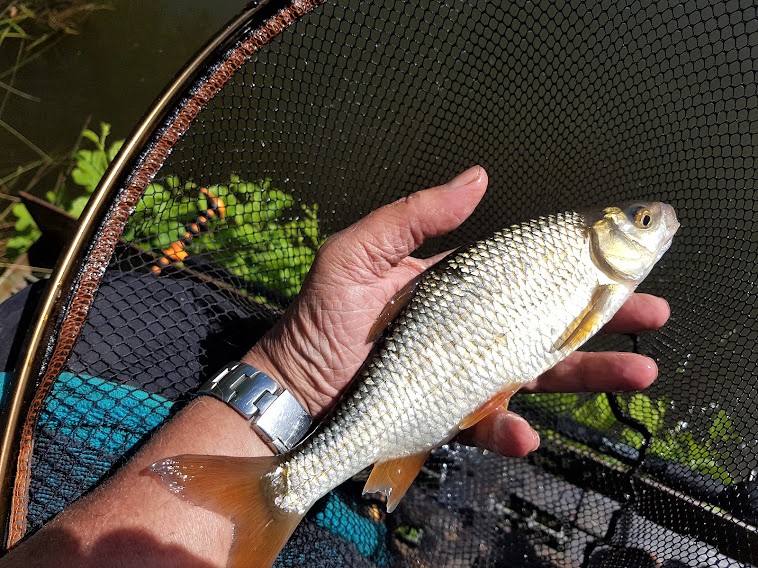 Not quite the way I had imagined ending the session, but with sport like that to finish the day I packed up feeling more than happy with the way things had gone.
What will my next visit bring? watch this space.

Too much weather but the fishies didn’t care
2

You're in the way- bugger off and go fishing or something.