How old are these rods?

This is my first post here, and I am hoping that you can help me out.

Earlier this year I was given some fishing tackle by a relative who's father had sadly passed away suddenly.

I have been trying to find out about two of the rods I have been given without much luck.

The rods in question are :-

I would like to know when these were released, and with the Daiwa rod what line rating (if applicable) and what the quiver tip rating is, also would i be able to use a newer tip in the rod?
Many thanks in advance

The Shakespeare could be a few years old or recent ,there are various models of the sigma, I would say yours is a 14' version.
The Daiwa should have a name on the butt ie Powermesh as an example, Again they did various twin tip rods, If has a union jack on the butt it's a uk made rod.

I had a carbon Shakespeare 13ft waggler rod I bought I believe in 1990, but there have been many sigmas over the years, photo of graphics may help.
S

I will get some better pictures at the weekend, just have these pictures of the rod bags, don't know if it will help? 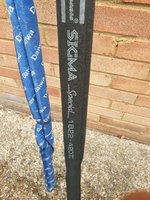 Shakespeare had (may still have) an annoying habit of recycling serial numbers - as well as names.
In coarse rods the first Sigma range debuted in the late 70s - mainly glass fibre rods with a couple of cheaper carbon rods in the 80s - and the legendary Sigma Wand tip rod.
Then it vanished only to reappear attached to an entirely new range of carbon rods six or seven years later - with the Supra suffix added to some.
There was a new range of Sigma rods released in 2012 - demonstrated by Mr Robbins on this video

The range was added to in subsequent years - the red graphics around the butt section should enable you to identify if you've got one from this approximate date.

I've got a whole bunch of Shakespeare catalogues from 1978 to 1998 (with some significant gaps) but I can't find a Sigma rod with that serial number - the only time that number appears is in 1998 attached to the 'Onset Match' - so you can say with some degree of certainty that your rod does not date from the late 90s.

Hi
Is it marked “Clubman” or “Denis White”? If so the Daiwa Twin Tip is a quiver/swing tip rod, it would be awkward to use as a float rod because of the action.

There should be a label on the Daiwa bag where it opens, that will have the model number on it, assuming it's the original bag, Or look for thbame and model number on the butt ,
S

I have taken some photos of the two rods, hopefully it will help to identify how old they are.

the quiver tip on the Daiwa rod is a push in, its a very fine tip but doesn't have a rating written on it, the other top section (float fishing?) Has a treaded eye on the top ring 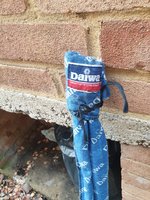 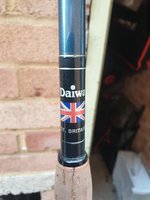 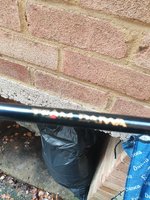 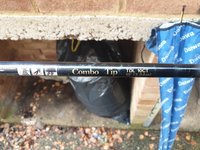 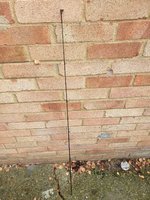 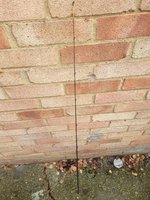 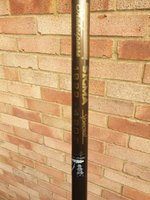 The Daiwa bag is the one they had in the early 90's, but they may have used it later, and it may not be the correct bag for the rod.

The quiver tip is interchangeable with current drennan and daiwa tips (not acolyte). Likely to be 3/4 or 1oz

There may be extra spare tips in the but, see if butt cap screws off

The other tip is for legering too, you can screw in a swing tip or use with bobbins

Can the other top be used for float fishing? Or will the action be too soft?