I remember a good Barnsley angler putting about 70 whopper dropper size balls in a noted swim on the Erne in one of Cliff Smarts finals all the rest like my mate three pegs away fed 3 to 5 balls as normal or nothing.
First cast with bait on the Barnsley guy had a hybrid about a pound and all the spectators were mumbling about him being about to empty it but that was his only fish in the first three hours.
Meanwhile my mate had a Bream after 40 minutes then another and so on to weigh a big 30 kilo weight and win the final earning a few quid and a nice bit of local cut glass but we had bet heavily on him with Dennis Salmon who gave him great odds as he had never heard of him and walked away with a couple of grand between us
It does not always pay to fill it in but we often go pre baiting before festivals because lots of the sections have not been fished much for months before the matches start up and it does help settle them in an area as the fish wander around. Now its mostly Hybrids for the bigger weights as the Bream have thinned out and have not been reproducing as there are mostly female fish with very few males.
Stocking of pond bred fish has helped and there are a lot more skimmers showing around Enniskillen so it may come back a bit in the future if the nets don't get them.
One of the reasons continental style matches have a pre match 10 minute baiting period is that it is usually bloodworm fishing and once the match starts you can only squeeze your balls one handed (oooer) and you are not allowed to disturb your neighbours peg with ripples.

Simon R said:
One large bucket missing from this picture - just over 500 balls in total - spread across four pegs on the River Erne 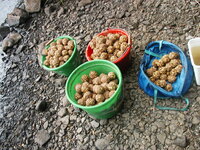 Took an hour to do six pegs

but did you empty the place the following day?

emmaemma said:
but did you empty the place the following day?
Click to expand...

Some did
Details are on here https://www.maggotdrowning.com/forums/threads/ireland-2005.28154/

Yeah I'm forgetting, we used to go the same time every year. The fish used to tighten up for spawning around Enniskillen, at the beginning of May time. Maybe in July Aug etc, they would have spread out into the vast Erne system. Then ground baiting for a day or three, might have worked. This thread has brought back some marvellous memories with fellow anglers from all over the UK, a lot of them no where near water.

Following on from the 'cows lick' thread

How many baits do you take with you?
2 3