How Father Christmas gets round all the kids in one night, [According to Science]

According to the United Nations Children’s Fund (UNICEF), there are 2,106 million children under age 18 in the world. If we assume that each household has in average 2.5 children, Santa would have to make 842 million stops on Christmas Eve, traveling 221 million miles. Given the different time zones, Santa has 36 hours to deliver gifts, therefore his average speed would be approximately 650 miles per second. It is less than the speed of light (therefore, it’s, theoretically, doable but still quite hard for a chubby old man). Larry Silverberg, a professor of mechanical and aerospace engineering at North Carolina State University, suggests that Santa uses relativity clouds to get the work done. Relativity clouds, based on relative physics, allow Santa to stretch time like a rubber band which gives him months to deliver gifts, while only a few minutes pass for the rest of us.

My three grandsons are of an age where santa is still believed, all good fun.

I do like a good children`s xmas program. My favourite is `stick man`, watched it no end of times, marvellous.

Time dilation theory... the closer you get to the speed of light the more time slows down

Just looked that up, yes that is definitely how santa does it.

Who is this "Santa" of whom you speak? Do you mean Father Christmas? Anyway, it doesn't matter how he does it, all of us believers, just know he does. 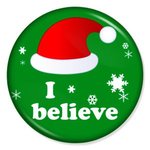