How are your waters fishing at the moment?

The buggers stink my van out I know that. 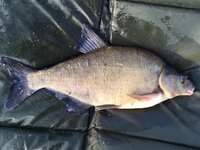 Weaver at Winsford very poor at moment bream are showing themselves but not feeding plenty of small silvers there but again hard work putting a few together. Up to yesterday had no rain for weeks hence river low clear little flow so not exactly great conditions to catch a few. Hopefully the rain and extra flow will have a positive effect .

Yep. very patchy here in Lincolnshire. Fished a venue yesterday that I only fish occasionally, local angler is convince there is a major problem with 2 out of 3 lakes. Loads of fish moving but not interested in feeding

Pole fished on the GUC last week and was catching slow but steady, some nice skimmers, roach and a bonus tench which really tested the no.6 elastic.

Whilst I’m doing OK there was an animated conversation on Saturday in my local tackle shop with regard to numerous club waters in the Maidstone and Tunbridge areas and how badly they were fishing this year.

It was a mix of river, general (match) lakes and specimen waters as well as commies under discussion - all turning out really low weights compared to previous years and blaming some of it on weather but a lot on the hammering the waters had during lockdowns by novice anglers demonstrating poor to appalling fish handling skills.

The weather has kept numbers on my local puddle way down in comparison to last year - yesterday there were only 3 anglers on the water at lunchtime but it had been shellacking it down all morning so not unexpected.
M

Been fishing my local pond for short spells. Tonight 7.30-9 I had 12 tench, 2 bream, 2 crucians and 15 decent roach. However, bite are touchy and it is a case of hitting every knock. Usually the float is buried

Me and my lad said:
Been fishing my local pond for short spells. Tonight 7.30-9 I had 12 tench, 2 bream, 2 crucians and 15 decent roach. However, bite are touchy and it is a case of hitting every knock. Usually the float is buried
Click to expand...

An hour and half ? That’s brilliant. You’d have to fish for three weeks around here to get close to anything like that. Well done MAML.

I don’t know if anyone’s found the same but my local reservoirs are solid with bottom laying weed. So much so that I can’t fish a live bait. It has to be dead reds or corn. If I move the bait it’s guaranteed to be buried. It’s the first time in many years I’ve had this problem and the fishing seems to be suffering because of it. We’ve always had margin weed, the stuff that grows up to the surface, but never this bottom, rotting, hairy stuff.
However, I did manage to get 12 or 13 slabs last week for about 50-60lb so things are looking up. But it’s been hard for most people since we were allowed back on the banks. The Carp lads are experiencing the same.
Oh well. Time to experiment with popped up baits

Due to lockdown last year I concentrated on a club stillwater that is only about 10 minutes drive from home and did quite well with some good mixed bags of Carp, F1's, Tench and Bream often maybe 50-60lb of fish in a 4/5 hour session. Move on a year and I have fished the same water, in about 8 sessions in the last 2 months I have had 1 carp, 3 F1's no tench or bream over about 1lb, I am using similar tactics and can't seem to buy a bite no matter what I have tried. The last couple of sessions I ended up on the whip catching Roach and Rudd, ok it was one a chuck but the average size was only a couple of ounces with the odd 6 ounce fish for interest. Other people are not seeming to catch larger fish in numbers either, the Carp boys are picking the odd fish up but also the fishery doesn't seem as busy as last year. One thing I have noticed though is if you fish a bait nailed to the deck you will end up with a bootlace eel, I probably caught one of these all last year, this year I have had a couple of dozen plus one proper eel of about 2lbs. The fish are there as you can either see them on the top or you see the lily beds knocking, I will keep persevering but I think my next session may be somewhere else for a change.
V

My club lakes became a shadow of when I joined three years ago, didn't bother renewing.

Silverfisher said:
In the last couple months the Stillwaters have been good, too early to say on the rivers was certainly rubbish to start with but I have heard a few good reports in the last couple days. Canals have been up and down.
Click to expand...

Certainly been an uptick in the Thames over the last few days after not much coming out first couple weeks. Was chub and bream coming out from day one but there's now been quite a few comfortable double figure roach bags over the weekend even heard of a barbel coming out today. Shaping up to be a good weekend provided there's not too much rain next couple days.

F
How quickly do fish learn ?

The Blue Shark: The Wanderer of The Deep Blue

Save Our Fishing – your help is needed now!