The day started at 7am and the weather looked as good as i could hope for with it being humid and overcast.I found i had the pond to myself when i arrived so i was spoiled for choice, i followed the wind which led me to the right hand side of the pond, the shallow side with good cover off some overhanging trees. 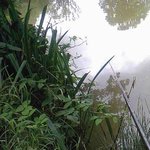 The pictures are all done on my mobile so are not the best but i got a few.
My bait for the day was cubes of meat as the big roach in this pond love it and the carp wont say no to it either. My feed was a shedload of hempseed pre boiled at home. A good handfull after every put in kept the bites coming, and i took some quality fish in the first hour. Tactics where simple pole rig with a bulk shot and bait on the bottom, i fished with just my top section, tight up to an overhanging bush.

The carp wernt huge but fought well and i was confident of getting one of the pond's larger carp before the day was over. However it was the roach which proved to be reliable again for me with some good fish between the 12oz and 1lb mark

The session was going just as planned..and then i heard it. The thunder, and when i peeked behind me i did not want to see what was there looming above me, and christ did it start to rain, thunder and fork lightening, and i was all on my lonesum to [][][]

I sat the storm out under the brolly for half an hour or so and then carried on fishing once the rain had subdued a little.
The roach and good fighting carp kept coming

I shortly after also got snapped by 2 of the carp that i was hoping for, i managed to get a look at one of them for a moment before it made a dive for a over-hanging bramble bush and i'd hazard a guess at around the 10lb mark, but you win some you lose some i suppose !

The next rumble came from my stomache and not thunder and at 5 oclock i decided to head home for shephards pie []
and on the "last cast" came my best prize of the session a pristine roach of around 1lb 5oz i would say. i Know the roach certainly go a lot bigger in the pond, but i was happy to see the fella !

All in all a brilliant day out [8D], a shame to see none of the big carp id hoped for but better to have hooked and lost than not to have hooked at all. The storm was also quite fun to watch aswell.
I'll be back again for the carp and hopefully a bigger roach and will kepp you posted on how i get on [8D]

Great report and not bad pics too! I thought about going on there today but the weather put me off, I think i'll try next week.
A

i'm going back to Heskin on either monday or tuesday next week Alan for a crack at those bigger carp i talked about, may see you there []

how is pool 2 on heskin, not been since it all been re-done..used to get some nice carp out of there plenty of skimmers also
R

how is pool 2 on heskin, not been since it all been re-done..used to get some nice carp out of there plenty of skimmers also
Click to expand...

Nice report Andy, cracking water that. How did you get on in your match on number 3?
B

cheers for info roach, is lakeisde any good only fished that once before..not been up that area for a while.thanks again for info
A

Tuesday it would be if i went there, what bait bans are there? any more info?
L

Barbless hooks only
Maximum hook size 12
No bite alarms
No braid (hooklengths or main line)
Keepnets in matches only
No floating baits
No PVA products
No method feeders
No bloodworm, jokers or boilies
No bread feed
No dog or cat meat
No trout pellets
Loose feed only
Groundbait in small feeder or small cup only
Luncheon meat as hook bait only

Nice catches! And good report, thanks for sharing!
J01