Have Corn will Travel Part 9

It seems like only yesterday we were lining up in a civilised order to pay our pools at Puddledock Snake lake for the first match of the Marsh AC season. That was the back end of June and now in mid October the season finale is upon us. Marsh's last match of the season is a rearranged match from March.

As per normal Mick dips his hand into the bag for the short walks and draws peg 2 (flyer). I go in and peg 15. far end of the lake. I had the Reverend Tony Roberts on end peg and more importantly the fallen fish holding tree. We could see the fish queuing to go in and out of it. It was that solid. Chris T to my left with Josh another peg down, Terry and Jim making up the section. Tony before the off Simon enjoying getting back on the bank After plumbing around the peg, I decided on a couple of lines. Top two plus two and 2+1 at slight angles where I had around 2ft 6inof water. I also set up a margin/shallow rig to fish in 12 inches of water to my right. I would be able to see the fish in the shallow water if they came in. I would be feeding 4mm Alders Farm pellets and fishing either a 6mm hard pellet or a grain of corn over the top.
I went for a walk before the start of the match, others had put a bit of thought into their approaches, feeder rods with both cages and methods on view, others priming long lines others with shallow rigs and float rods. Such is the diverse nature of Arrans and the fact we only fish it once a year. But which would prevail.

At the all in I started off at 5m with 6mm hard pellet and fed a small handful of 4mm sinkers. Float dips and a bite, missed it and the next 3 bites. On the fift bite I connect and a carp around 3lb comes to the net. Tony had gone off like a train with some shallow slapping fish. Over the next hour it seemed he would have one every couple of minutes. Chris and Josh were both off the mark with Chris starting off on the pole before trying the bomb and bread. Josh catching on expanders over 4mm feed pellets. I felt way off the pace and mentally shot. I did not want to be there and felt as if I was just going through the motions. A chance chat with Tony who had got up for yet another boiled egg, about floats of all things helped. I sat back down and felt the fish would switch on at some point. I decided to keep my silvers instead of throwing them back( wise move). Vic had called and said things were bleak up his end of the lake and very few carp were being caught except for Mick who was plodding away. 
I started working the float a lot more, lifting and dropping a couple of inches each time, fishing shorter/longer to the sides, all stuff I would normally do and slowly I would nick odd carp and they looked bigger than Chris T's. Both Tony and Josh were way in front of me and I had no chance of catching them up unless the fish came into the shallow water late on. By rotating 5m, 4m and margin and a slapping rig I was getting plenty of bites from roach and rudd but little in the way of carp. With 90 minutes left things changed in the peg. The bites stopped, no roach, no rudd, no carp. I made the decision to put 3 big handfuls in to kick start the peg. Nothing to lose.

After 10 minutes the float dipped at 4m and a carp, followed by another carp. I was now sat on 10 carp for estimated 30lb. I had nothing all day on corn, everything coming to 6mm hard pellet. In hindsight I think I made a couple of mistakes during the match, not setting up and fishing a longer pole line, which would have allowed me to prime a shorter line better. A few more carp followed. Finishing on 13 carp.

Tony and Josh were way out in front, but it would be close between my pellet fish and Chris's bomb and bread fish. As it happens, me saving my odd roach put 2lb on the scales to add to my 46-08 of carp. Chris's 46-00 falling just short. Josh on his way to second place It would be tight between Chris and I

It fished very hard throughout our match, or it was just winter fishing. Tony fished a blinder, catching those resident fish, shallow to start before going deeper to catch them on the deck. Josh chopped and changed from hybrid, to long pole to short pole and an excellent second place. Mick took third spot and an MK Nugget off me with 61-00. 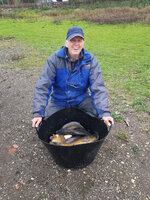 Tony with part of his match winning 112lb Jim with 13lb of roach and rudd
Overall

Vic and Gino shared the middle section prize with 21-00

Well done to all who have managed to stay safe and able to continue their fishing throughout these troubled times. Another season over but a new one to look forward to, hopefully a few new venues to try out next year.
On a personal note I will be splitting time between the southern matches with Marsh and a lot more matches in the West Midlands with the Yam Yams.
Unfortunately, a Yam Yam, Mark Fox with be returning home to West Bromwich and not fishing the Marsh matches again. Its been a pleasure to know you Mark and hopefully will catch up soon.
Finally to Dave and Tony for putting up with all the rubbish a committee has to put up with. You both do a great job, keeping everything simple and trying to achieve a balance.

Have Corn will Travel Part 8

Have Corn will Travel Part 7