Just remember no more than 100lb per keepnet.
Click to expand...

Unfortunately and despite my best efforts I don't think I'll be able to make it this year, too many family commitments. [:C]

I've sent Mick a tenner towards the Tardis (does anyone know how he is?) but if you need any more dosh for unused day tickets etc. please let me know.

You all have a good time now, I will be thinking of you.

Sorry to hear that Doug, Mick did say that you had given him a deposit and as it's been a while so I was looking forward to seeing the A-Team battle bus again!
I have spoken to Roger Bellamy tonight and the portaloo will be the same price as last year (100) and the fishing is 30 for the weekend regardless of how long. He also said that he has had some guys over there streaming the grass as it has gotten a bit overgrown and that if we need any more cut to let him know and he will send someone round .... so be prepared!

30 fishing *and* camping for the whole long weekend plus a tenner or 15 each for the tardis. It don't get much better than that.

So will the cost of the tardis be split equally or pay per poo?

So will the cost of the tardis be split equally or pay per poo?
Click to expand...

OK my van is packed already, im leaving from school tomorrow picking up a friend staying overnight and then getting some last minute Meat and Ice Thursday morning and then off to Harty. Yippee

OK my van is packed already, im leaving from school tomorrow picking up a friend staying overnight and then getting some last minute Meat and Ice Thursday morning and then off to Harty. Yippee
Click to expand...

Meat and Ice - I hope those aren't euphemisms

im on an earlier shift this week ...if not too knackered by en dof fri night shift ill be coming down early sat morning hopefully in time for one of you early risers to get kettle on
B

So what's happening - who's fell in, whose got a headache?

My lips are sealed.

For the next few hours anyway.

Wait till I plug the phone in, then things might change a bit.

So a few highlights

A few souls were up and about as I arrived at 8am on Friday morning and no-one was admitting to catching much.

I set-up camp, had some sausages, and had a pleasant few hours on the pole. No joy on the 13m line for bream (as per the last two years). All was going well until an unexpected Godber arrived.

The afternoon was spent trying a few things and helping out some muppet (not one of ours) who had decided to go off-roading in his Ford Focus.

The evenings entertainment was a pleasant enough drink and chat although Jessebob, for reasons best known to him, had set up down in the jungle. I dont remember much of that evening (I think the second bottle of wine may have been off). Although Hamish was complaining about a bite on his leg. He said it was a horsefly, but I suspect is was Muskie.

We were joined by Arky at 0330 Saturday morning, apparently. I never heard a thing, but Banksy and Godber were not so lucky.

By dawn Muskie was laid low with a Migraine (or was it blood poisoning?) and we set down for the match.

I cant remember much about it, but Godber was sure hed won it with his estimated 35lb of bream. The weigh in said otherwise.

The evening was spent dodging showers with a barbeque, drinking in moderation and feeding raw hamburgers to the local eel population.


Godber rediscovered his passion for chilli vodka, some dodgy bloke turned up in an all-in-one-come-romper-come-camo-suit that left nothing to the imagination. Maybe it was a fashion statement, but I suspect it was more of a cry for help. And Arky was left somewhat traumatised after the most bizarre impromptu lap dance youve ever seem. 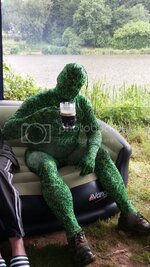 And I got this weird out of focus photo. All I can say is that however bad this looks; the reality was ten times worse. 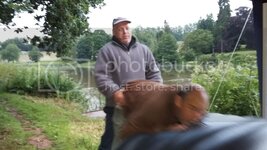 Early Sunday morning I left. Goodness knows what state things are in by now.
Last edited: Jun 26, 2016
B

Well I had a good time in the company of good friends again. Pity the numbers are dwindling.
J

Ummm, I decided that having talked about it for the last God-knows-how-many years, I would set up camp in the jungle (it looked a little more sheltered down there anyway).
I spent most of Friday afternoon setting up camp and fishing kit, (no fishing for me that day) and I spent the best part of Friday night and probably some of Saturday morning at Camp Jessebobs avoiding Spanky's chilli vodka and drowning our sorrows with Maltese Mick.
Match day Saturday was fairly uneventful for me (and a lot more sober due to the absence of Sidewinder Dave), plus I had to make my own breakfast!
Well done though to Spanky who retained the Memorial Trophy with a fine net of quality roach and hard luck Godber for pulling out a cracking net of bream and roach which looked to have won the match easily but the bream were hollow and weighed a lot less than they looked .... In a month's time it would have gone 30+ easily.
Saturday evening was back at Camp Jessebobs for the annual Barbecue and storm-dodging evening. It went well especially for Hartleton newbie Amanda (partner of the Camo gimp) who was little worse for wear.
We raised a glass to absent Soap-dodgers: Cleggy, Sean and Breamy and I retired early leaving Mick and Arky to minesweep the table.
Sunday was a day of serious fishing for me, in amongst catching some cracking roach and decent bream I managed to lose 2 carp on the silvers kit from the margins, one of which I got close to landing but it did me in the weeds by my feet and left me with a nice pole float impaled in my finger.
I was determined to prove to myself and the rest of the world that you don't always need broom handles and 100yd casts to catch carp so I spent a good few hours in the evening (and pouring rain) with heavy gear on the pole to try and land something sizeable but it weren't to be so I packed my fishing gear away and put back what was probably the biggest net of silvers I've caught in twenty years, I had a job to lift the net out!
I spent Sunday evening with just the leftover alcohol from Saturday night for company ... I never knew how nice that Hobgoblin stuff is but the Brothers Toffee-Apple is a bit of an acquired taste and reminds me of what they give you at the dentist to swill your mouth out with. I gave the red wine a miss!
Monday morning and time for me to go, and typically the sun was shining so I celebrated on the way home with fish and chips and a pint in the beer garden of the King's Head on the A40 just outside Gloucester. The girl who served me probably thought I was a tramp who had found a tenner!
So that's it for another year amongst old friends, not sure what will happen next year but I shall post something on the Fish-in section where people can throw a few ideas around.

Another memorable long weekend at Hartleton, in great company.
It's lovely that the whole meet is so informal, fish when you want to fish, sleep when you want to sleep, be sociable or unsociable as you fancy, and nobody minds.

I loved the way people kept popping by to see me every morning, but perhaps that was because they were en routeI to the unflushable portaloo next to my peg.

The green "Beast of Hartleton" and his inflatable unstable sofa had me in stitches, well done Trev! And thanks to Steve for bringing that gazebo, Saturday night in the rain would have been very different without it.

But after three nights in a tent which was 6" shorter than me, the luxury of stretching out in a king size bed in the hotel... I had a solid 10 hours of wonderful dreamless sleep.

Unfortunately due to work commitments i could only get down early hours sat morning and had to leave sun afternoon but as usual well worth the trip ...Lovely place is hartleton and one of the highlights of the year for me ..

The usual banter ,alcohol and good friends oh and a bit of fishing what more do you want []


One unfortunate consequence is that im going to need years of expensive therapy after seeing trevs bits bouncing around in his gimp suit[:0][:0][:0]
M

I'm hopeful of being able to join you all again next year, I've had a bit of a sabbatical whilst becoming a dad, but I reckon I have a few fishing weekends in the bank for next year.