Back home after a great weekend as usual, roll on next year!
J

I wonder if anyone's found the little surprise I left behind yet
Click to expand...

Ummm, it was a bit difficult to miss!!
Godber is now the proud owner of the axed pig head!!!!

I wonder if anyone's found the little surprise I left behind yet
Click to expand...

Ummm, it was a bit difficult to miss!!
Godber is now the proud owner of the axed pig head!!!!
Click to expand...

I had visions of someone stumbling across it in a semi-drunken stupor...
J

That's another year done.
Great company as always, the fishing wasn't memorable at least not until the last hours of the last evening when it all came good.
But the Hartleton experience can't be beaten and I'm sure I will be back next year.
Lovely to see Sean's family stop by (Trev missed them by about 15 minutes) and well done Spanky for winning the memorial match with a great net of small fish.

dammit, I wish I had stayed longer. Hartleton certainly does have a certain draw to it, every year is different and throws up the odd surprise every now and then. Where else can you get an eclectic mix of anglers all getting along and learning different stuff. A hemp and Tare angler learning how to use a marker float and spod rod and a Carp angler chucking fluff with some weight forward line and a bit of slick wrist action. See you all next year guys.

Just realised that this was my 7th Hartleton, still got photos from my first in 2009. Photos with a fair few tench in them.

Again, wouldn't have missed it for the world, there's just something about the place and the people there.

Well done to Spanky for his runaway victory in the match.
Venit, vidit, vicit, exit!

And thanks to Grannyspomber for introducing me to the new experience of feeling for different bottoms. Opened my eyes, that one. And for the three tench chod rigs you tied up for me, plus the goose quill float created on the bank, AND for the Spomb!
Pity the wind spoiled it for the fly fishing, but at least we saw something have a go at that buzzer.

Strange how the fish did not respond as they usually do, my average bag this year was about half what it was last year. Maybe that consistent wind had pushed the fish right up to the shallow end,maybe they were still spawning, maybe there was more fishing pressure these days, maybe ...

And every night, we told each other that it's not all about catching fish. Good job, eh?
As I promise myself every year, next year I'm going to be more mobile.
Roll on 2016!

And thanks to Grannyspomber for introducing me to the new experience of feeling for different bottoms.
Click to expand...

I think that's enough to scare off most potential attendees...

errrmm I happen to be a very good bottom feeler.

So a few photos from me.

I arrived at about 8am on the Friday. Priority was to find a peg towards the deeper end of the lake pitch the tent, and get some breakfast on.

Friday's weather was fantastic. So I leisurely put some gear together while breakfast got going. 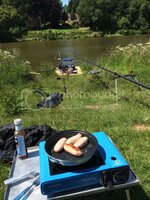 I fished a couple of short sessions on the Friday (more details on my blog when I get a chance) and just enjoyed the lake. 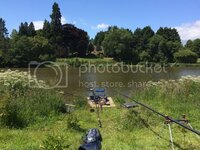 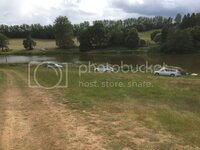 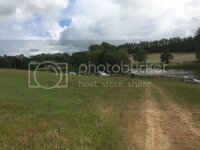 And the results of a hard fought match on the Saturday: 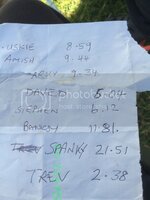 Sorry I missed out on the annual get-together lads and lassies, had to go straight home after the Lindholme festival and sort out a few issues with the builders working on the house.

I didn't have anybody's phone numbers or I would have called.

Sounds like a good time was had by all, as usual: maybe we can get to meet up in September if Granny sorts the dates out?

Oh, by the by: do I owe anyone any money for anything? I know I chipped in for the thunder-box. []

Cats (and carp) in France