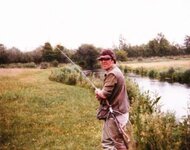 Graham Mole died peacefully at home with his family around him on February 27th this year, he was 84.

Graham was an enthusiastic supporter and valued member of the Angling Trust and one of its ‘Ambassadors’. He was more lately well-known as the Trout & Salmon magazine’s contributor providing its monthly column, ‘Wessex Waters’ with river reports and regional updates.

Professionally, Graham was a journalist. As well as being a freelance writer he worked in television for many years and, more lately, lectured on media studies at Winchester University.

As an author he gave the world four books, his ‘fishing’ book carried the quirky title: “A Multitude of Fins”. Published in 2014 this title sums up the somewhat, self-deprecating style of the book, written I don’t doubt, with a wry smile on his face and a determination to tell-it as it is. Within its pages Graham’s passion for fly-fishing and his love of the natural environment emerges strongly.

Being the good journalist that he was he always had an ‘eye’ for a story and should it involve any authority, the teeth and claws to take them to task too.

My friendship with him spans many more years back to 1975 when he joined the little syndicate that we had fishing the Itchen below Winchester. During those years, Graham was still a comparative novice to the craft of fly-fishing for trout. Fortunately, that reach of the river was still delivering superb fly hatches and held a head of large, if very educated brownies. However, he was keen and very anxious to learn the necessary river craft that ensured successful dry-fly fishing on that length. By the time our three-year lease was up Graham had passed his initiation period and become a pretty competent fly-fisher.

Subsequently, Graham then joined us upriver, above Winchester, at Abbotts Barton where the more testing fishing really honed his abilities in terms of presentation and fly identification. He became a highly valued member of the Abbotts Barton Club, always ready to lend a hand with any work-party or join in with any social gathering. It was during this period he developed a deep affection for the water meadows and the streams that silently drained these wet places, so rich in plants and other wildlife.

Graham and I went to fish in northern Spain in 1995 as the guests of the Spanish Tourist Board. It was here that we found some of the most ‘overfished’ stretches of any river that we had ever encountered but could not fault the hospitality and generosity of our hosts. Graham was a great fishing companion and although this trip failed to produce any hugely successful fishing, we most certainly enjoyed many a bottle of some very fine Rioja and a memorable ‘bundle’ of laughs.

Graham was a dear chum and incredibly special fishing companion. He is survived by his dear wife Annie, son Joe, daughter Helen and granddaughters Alex and Olivia. He will be greatly missed and fondly remembered.