Gracious me... that was bonkers!

I am still trying to get my head around the session I had today. The following is one part "Where I fished today", one part "Catch Report" and one part "Tackle Review" (kind of). Mods, please forgive me for the boundary crossing nature of this post (how very Gen-Z of me!)

If you've seen any of my previous posts here then you may already know that I am besotted with float fishing with a centrepin. I will choose trotting with a pin over every other form of fishing usually. One obstacle to that up here in the wilds of York is that some of my local rivers have very deep swims, and a fifteen foot rod is often too short to manage it and sometimes hopeless inadequate. I had been considering purchasing an 8m whip so that I could (kind of) trot deeper swims if needs be, but I couldn't quite bring myself to it. So I was delighted when I was able to get a close look at @Sam Vimes 17' Acolyte, and even happier when @JayBee offered to sell me his. Problem solved; I can now trot deeper swims and use my pins to do it.

Today was the day to christen the Acolyte, and I decided on a trip to the Ouse at Overton for a gentle trotting session in the hope of some roach and dace. Here is a pic of my swim for the day... 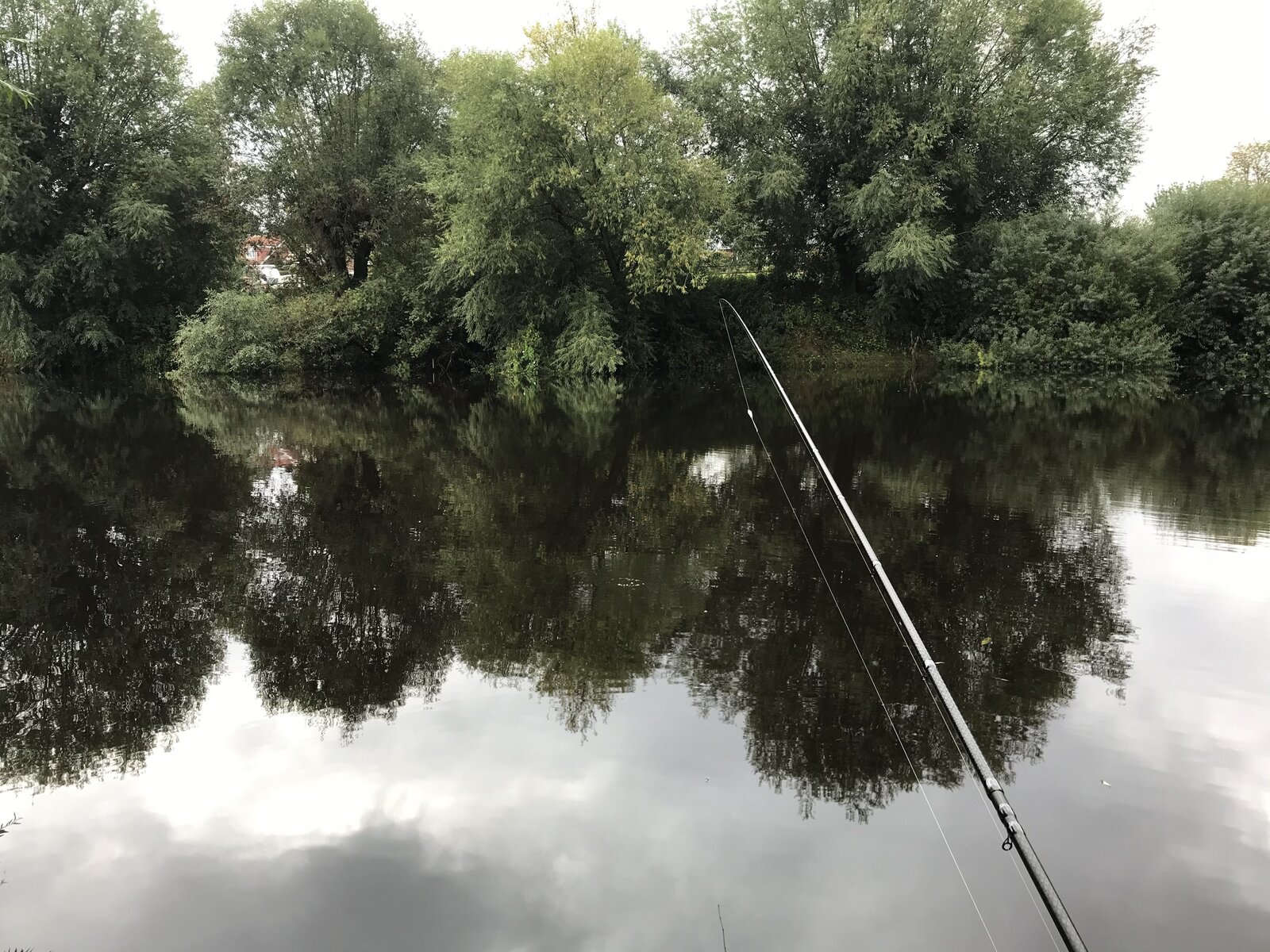 I kicked off with a ball of groundbait and fished castor under a bolo to target better fish nearer the bottom. The pegs at the Overton stretch of the Ouse are on the inside of a long bend, so the flow is very minimal at the near side. First fish was a wee Gudgeon which put a smile on my face. I also caught a bigger one but no picture of him unfortunately... 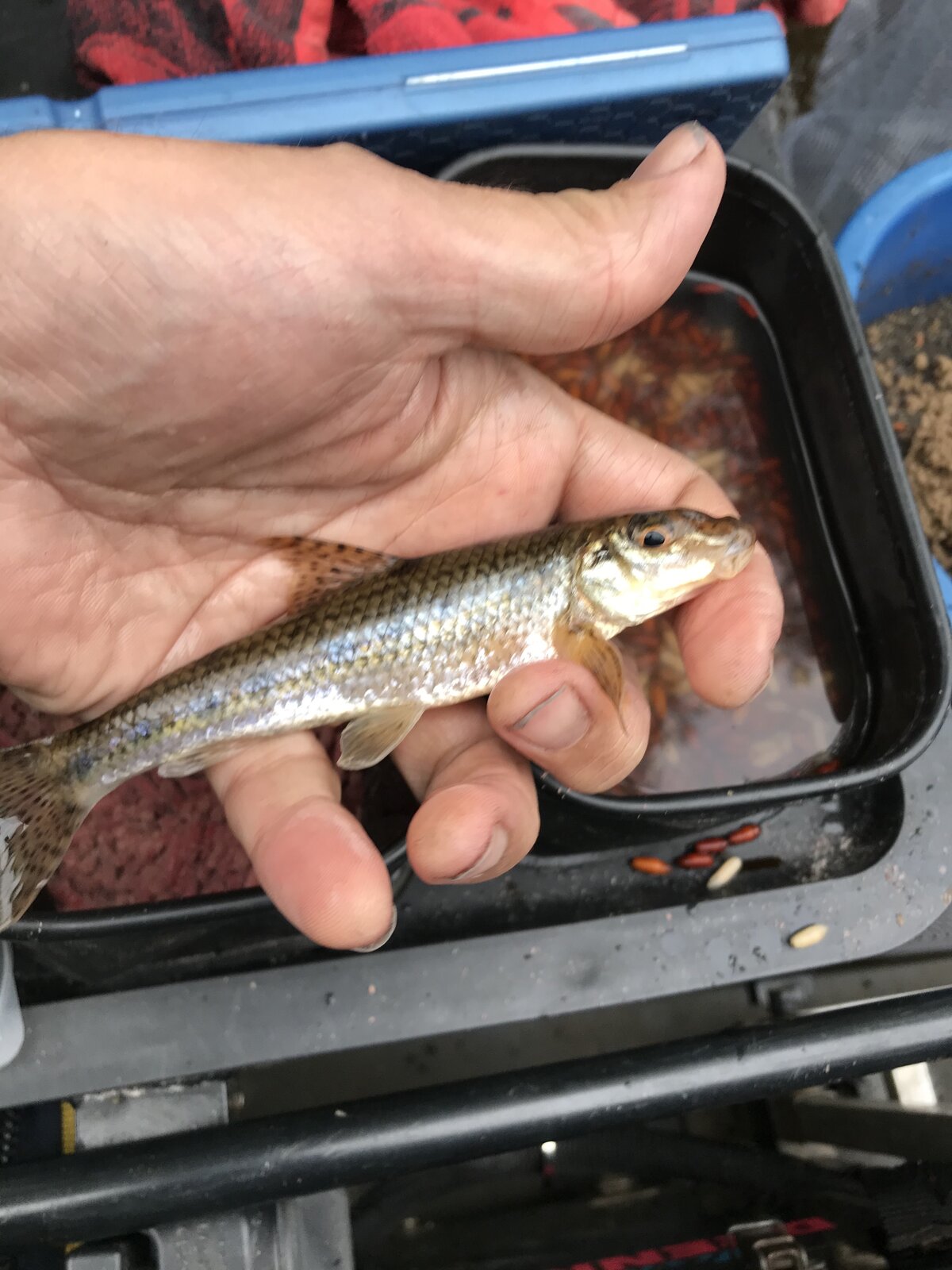 It took a little while to get going, but I finally began to catch a few dace and I was hopeful of some nice redfins before long. It was maybe 90mins in that I hooked the bottom, and the bottom began to move. "Hello Bertie, wasn't expecting to see you here!" Wasn't expecting to land it on light gear either, and after a couple of minutes he dived for a snag and that was that. Hey ho, I was after the silvers and re-tackling wasn't the end of the world.

Midday came and after a few dace and roach on a strung out stick float rig it started to get quieter, so I bunched my shot into a double bulk of 4s and 8s and tried to get the single castor down to the bottom a bit more effectively. Lost a nice roach to a broken hooklength and began to think about going home (tummy rumbling and all that). It was just then that one of Bertie's mates decided to show up. I innocently struck a nice decisive bite fully expecting a roach, only to be met with that slightly scary initial lunge of an angry barbel!

Now at this point I should remind you that I'm fishing a 17' Acolyte rod with a centrepin and 3.2lb Drennan Floatfish, and my single castor is impaled on a side 18 Drennan silverfish!!!! Hmm! I didn't fancy my chances, especially with the snags nearby. However, 5mins into the scrap and I am beginning to think that I am in with a teeny-tiny chance. And that's when I remember that I only have a tiny pan landing net head! I had brought my Drennan Specialist head, but it was behind me in the holdall. I wish I could've filmed what happened next. There I was sitting on my seat box, with landing net handle in left hand, net head between my feet as I try to unscrew it while holding a 17' float rod attached to a rampaging barbel in my right hand. I cannot believe it, but I actually got the net off and the bigger one attached and still had the fish on. By that time I wasn't sure which of us was more ready to give up, but I suspect it was me.

Agains all odds, logic and reason I managed to land the jolly fish. A fat Ouse barbel that I'd guess was about 8lb (I don't care how much he weighed to be honest, because it just felt like an achievement to land him). Here he is... 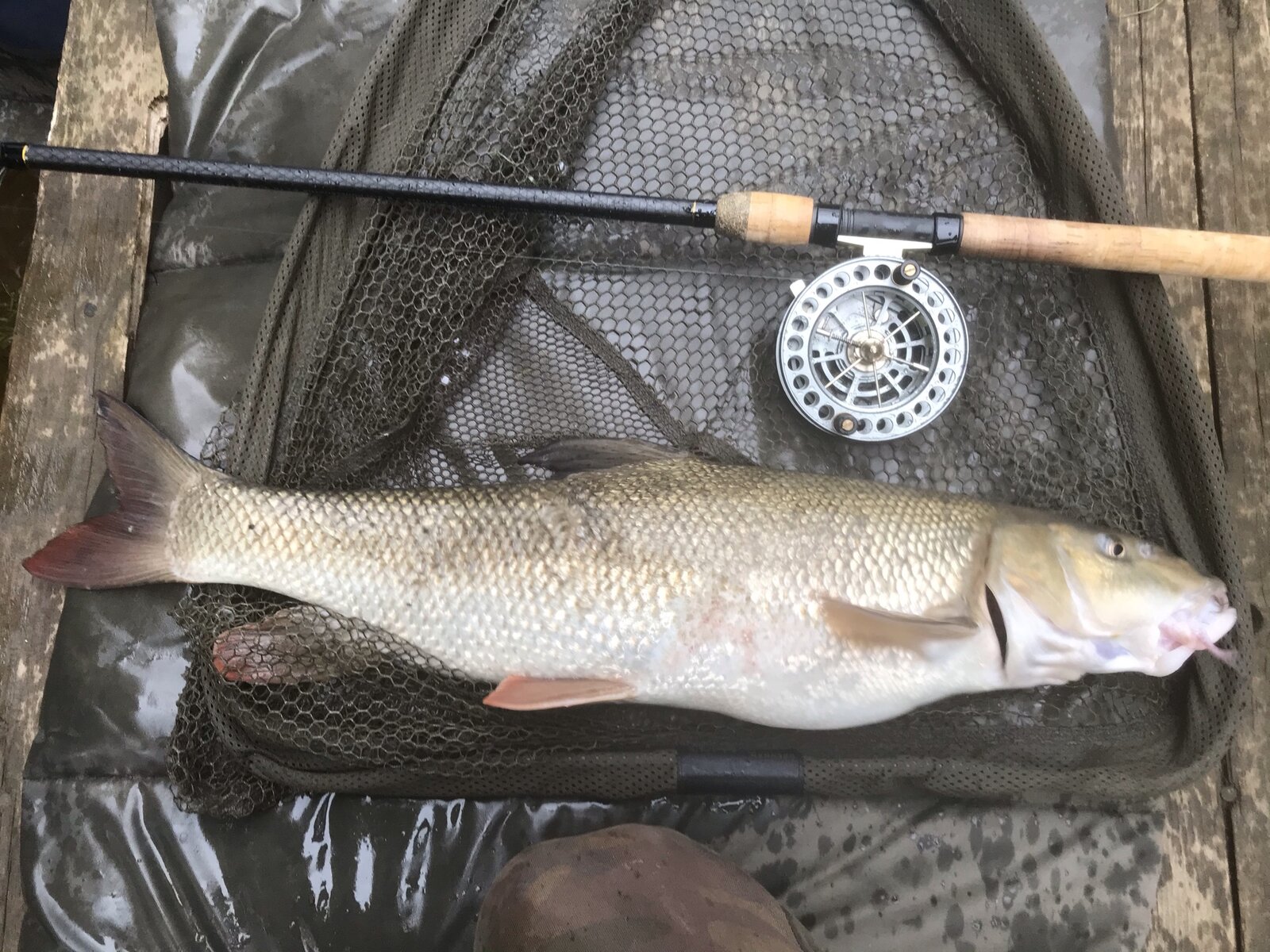 For all the reasons above, I think that this will rank as my most memorable capture for quite some time!

Now, a few words about the 17' Acolyte. I read in a post somewhere here that they wouldn't manage barbel, and I have to say that I wouldn't deliberately go after them with this rod. Nevertheless, what a beast of a rod it is!!! Remember I had 3.2lb line and a size 18 hook! There was a period during the fight when I was counting down the seconds until the hook pulled or the line gave- the fish was in full rampage mode and I had to clamp down on the reel and hold on for dear life because of the snags. The rod was just phenomenal in that it absorbed all the lunges of the fish, even when I was refusing to give it an inch.

"Snapolyte"? My 'arris! It's a phenomenal rod.

Unsurprisingly I called it a day after that. My modest net of silvers needed to be released and I needed a lie down! 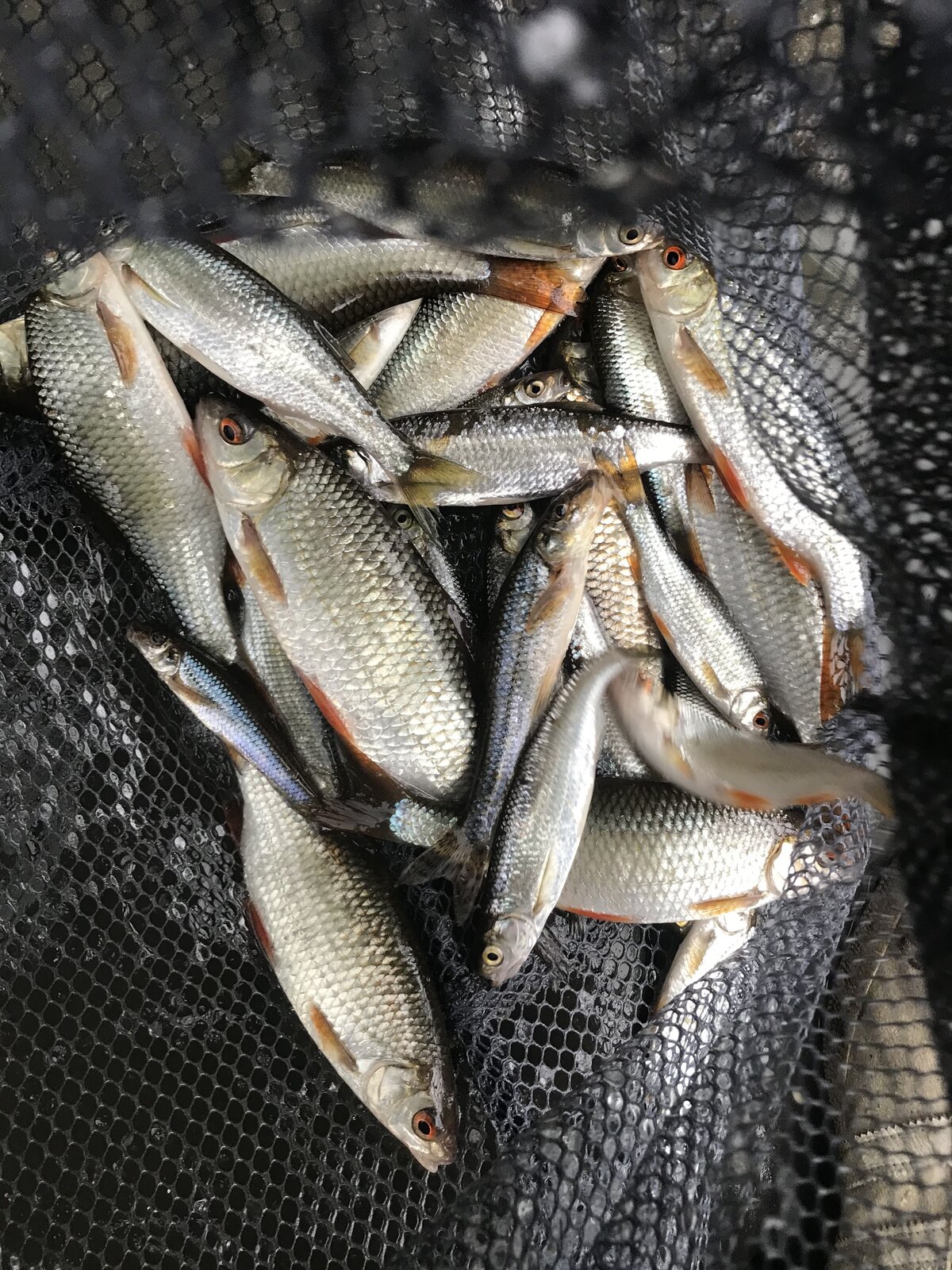 So there you have it.

River fishing in York is in fine fettle, the Acolyte 17' is a beast, and I am exhausted but extremely happy

Done very well to get that in! I had that rod and like you say I wouldn't want to specifically target Barbel on it but you've proved it's possible.

What was the hooklink strength out of interest? Not that surprised the mainline held out but if that’s on a sub 3lb hooklink that’s very impressive indeed!

I have plenty of float rods that I wouldn't deliberately target certain fish with. Unfortunately, the fish don't seem to care. The first few bigger fish I had on the 17' Acolyte left me with a lump in my throat. Once I'd done it a few times. I stopped worrying. The problem with the rod is that quite small fish put a hefty bend in it. It doesn't appear as if it could possibly handle much over a couple of pounds. When you finally hook some better fish, you soon appreciate that it's not quite as wet as it first appears.

Cracking fish and nice write up (especially the panic stations landing net kerfuffle). I know Acolytes get some stick, but the power in the butt coupled with the ability to absorb crazy lunges at the top is superb. Well angled, these stories & pics are the ones that make you wanna drop everything and go fish

Nice days fishing and it is surprising what you can actually land with light gear. For a long time my best Barbel was a 9lb 1oz river wear fish caught in Durham using a 13ft Daiwa spliced tip Conny with 3.2lb line 2.1lb hooklength to a size 20 mustard 90340 with a single caster attached. It made a good attempt at making for the sea at Sunderland but after a lot of care and squeaky bum moments I finally landed the thing. But I will say there was more than one occasion that I wished I had missed the bite

qtaran111 said:
I know Acolytes get some stick, but the power in the butt coupled with the ability to absorb crazy lunges at the top is superb.
Click to expand...

Spot on with the absorbing point. I think that softness in the rods (particularly the ultra) in a way means you can land big fish on them even if it takes ages as it takes some go to break even a light hooklength on them. My grandad had his first and only 20lb carp on his on a 0.11 bottom. It took nearly 20 minutes to land if I recall but once he’d negotiated the first couple runs you felt it was never going to break off provided it didn’t find a snag as the rod just kept absorbing the lunges. The downside is you have very little say in where the fish goes so any snags and you’re in trouble!

What was the hooklink strength out of interest? Not that surprised the mainline held out but if that’s on a sub 3lb hooklink that’s very impressive indeed!
Click to expand...

nejohn said:
Nice days fishing and it is surprising what you can actually land with light gear. For a long time my best Barbel was a 9lb 1oz river wear fish caught in Durham using a 13ft Daiwa spliced tip Conny with 3.2lb line 2.1lb hooklength to a size 20 mustard 90340 with a single caster attached. It made a good attempt at making for the sea at Sunderland but after a lot of care and squeaky bum moments I finally landed the thing. But I will say there was more than one occasion that I wished I had missed the bite
Click to expand...

I was mighty glad there wasn’t much flow to tell you the truth. If this had been the Wharfe it would’ve been “Night-night nurse” time

Fantastic! Thank you for sharing and writing your day up so well!

Cobweb said:
Fantastic! Thank you for sharing and writing your day up so well!
Click to expand...

Thanks mate, my pleasure

I guessed that I'd get a report on your use of the rod........Well and truly christened it now haven't you?
Very well angled and you want to keep the rod....Yes?.

"you don't need all that gear for this place"
2

Lift bites - no idea what was making them

Cor, that was close.